"Charlie gave Linda Kasabian the woman's wallet and told her to put it in the bathroom in the gas station and leave it there, hoping that somebody would find it and use the credit cards and thus be identified with the murders…."  Helter Skelter, page 245 (1975 paperback edition)

"Charles Koenig, an attendant at the Standard service station at 12881 Ensenada Boulevard in Sylmar, was cleaning the women's rest room when he noticed that the toilet was running. Lifting the lid off the tank, he found, on top of the mechanism, damp but above the waterline, a woman's wallet. He'd checked the driver's license and credit cards, saw the name "Rosemary LaBianca," and immediately called LAPD."  Helter Skelter, page 255

"After driving for a long time, [Manson] pulled off the freeway and stopped at a nearby service station. Apparently having changed his mind, Manson now told Linda to put the wallet in the women's rest room. Linda did, only she hid it too well, lifting the top off the toilet tank and placing it over the bulb, where it would remain undiscovered for four months.
"I asked Linda if she could remember anything distinctive about the station. She remembered there was a restaurant next door and that it "seemed to radiate the color orange."
"There was a Denny's Restaurant next to the Standard station in Sylmar, with a large orange sign.
"While LInda was in the rest room, Manson went to the restaurant, returning with four milk shakes.
"Probably at the same time the LaBiancas were being murdered, the man who had ordered their deaths was sipping a milk shake."  Helter Skelter, page 365

Visiting a location related to a crime serves more than just to satisfy morbid curiosity. It can also give the careful observer insights which lead to possible understandings of what really happened at that location. Such was the case recently when I made a visit to the Standard gas station in the Los Angeles neighborhood of Sylmar where Rosemary LaBianca's wallet was discovered in the tank of the toilet in the women's room on December 10, 1969.

I've often wondered about that Standard station, and if Manson really thought he was in a black neighborhood when the car stopped there, and whether he really had Linda Kasabian plant Rosemary's wallet so that a black person would find it, use the credit cards within, and thus be implicated in the LaBianca murders. I didn't know that there were any black neighborhoods that far out in the San Fernando Valley (farther north even than Spahn's Ranch).The prosecution later said that Manson thought they were in Pacoima, a neighborhood about four miles southeast of Sylmar off Interstate 5 that was a predominantly black neighborhood in 1969. I wondered if a person would reasonably mistake the two areas.

But I ran into a bit of trouble when it came to tracking down the Standard gas station. In Helter Skelter Vincent Bugliosi gave its address as 12881 Ensenada Boulevard in Sylmar. But according to both Google Maps and my most recent (1990) Thomas Guide of Los Angeles County, no such street existed.

Left dangling with the thought that the street had been obliterated by urban renewal since 1969 I was surprised to learn from Deb that she and Matt had visited the station on the 2013 Manson Blog Tour.  She referred to it as a "Chevron station."  A little research revealed that Standard Oil of California changed its name to Chevron in 2013. So I googled "Chevron Station Sylmar" and Voila! Up came the street view image of a gas station, but one located at 12881 Encinitas Boulevard, not Ensenada. (Is this an honest mistake in Helter Skelter, or is it an example of more intentional misinformation from the Bug? In The Family Ed Sanders calls the street Encinatus Boulevard.). And as I looked at the Google drive-by image and rotated the scene I saw, next door to the gas station, a Denny's Restaurant.

Looking at the location on the map I was even more surprised to realize that I already had a personal history with this particular gas station since it is the one I walked to to use a pay phone and call a tow truck to pick up my VW bug after it had blown a generator pulley at the southbound Roxford Street exit during my move from Death Valley to L.A. in 1983. More intrigued than ever, I decided to check the location out the next time I went to the area. That happened in mid-July of this year.

The first thing I wondered about was whether someone really would have thought they were in Pacoima as opposed to having some other reason for pulling over at that exit. I came to a conclusion on that point fairly quickly.

As I drove north on Interstate 5 in the direction from the LaBianca residence in Loz Feliz to Sylmar (it's a 20 mile drive that would probably take about 25 minutes during late night hours) it became apparent that there were no obvious places where someone would pull off the freeway if they were looking for something like a gas station. Even today accessible businesses like gas stations and restaurants are pretty sparse until you get all the way to Sylmar. The distance between Pacoima and the gas station exit in Sylmar is about four miles, with exits in between that you could pull off if you thought you had passed Pacoima. In this area of the freeway the exits spill out into areas with many buildings such as for small businesses or residences. In other words, they spill out into "neighborhoods."

I wondered if the Sylmar Standard station had the appearance of being in a black neighborhood, if someone would think they were in one if they were there.

But although Sylmar is a neighborhood, the station isn't located in anything like a neighborhood at all. It is barely off the freeway, and there is nothing around it that even resembles a residential area. Today in the surrounding blocks there are some apartment buildings, but they are obviously of post-1969 vintage. Likewise, the McDonald's and Mobil gas station are clearly newcomers. I stayed in the area for a while, taking pictures and getting the feel of the layout. While my female assistant went into the women's room and took photos of the current toilet (amazingly still a tank model!) I went to Denny's to check out the interior. As a cover for my presence inside the restaurant I ordered a milk shake. The interior had likely been redone since 1969, but it was clearly an older building. The clerk didn't know how long it had been there. (The gas station building, although long since remodeled into a gas station/food mart-type enterprise, was of a basic style consistent with it being the same structure that was there in 1969.)

The whole area had no feel of any kind of "neighborhood." It had the feel of a remote service area right off the freeway. 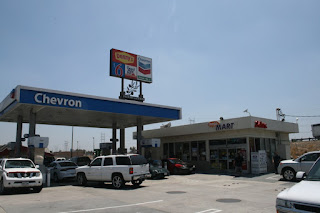 Above: The Standard/Chevron station at the Sylmar exit off Interstate 5
Below: Another view of the station showing the close proximity of the freeway behind it 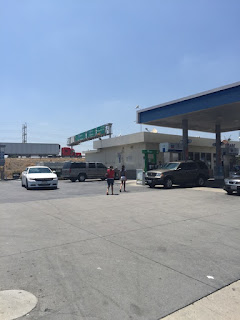 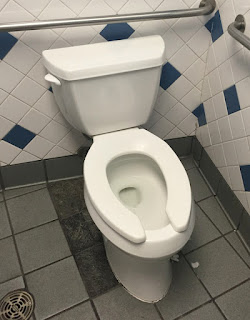 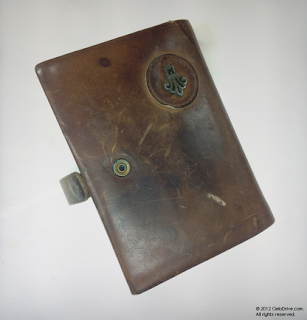 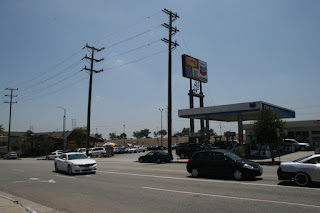 Above and below: Two pictures showing the relationship of the gas station
to the neighboring Denny's Restaurant 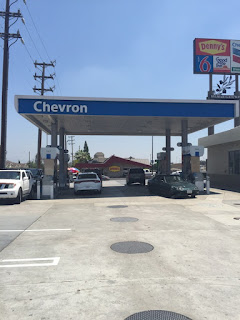 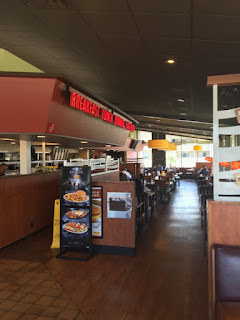 Above: Inside Denny's
Below: The receipt for my milk shake 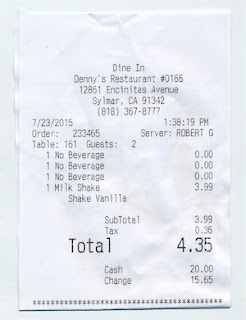 When I asked Charles Manson for his version of the gas station/wallet incident he told me that he knew the station wasn't in a black neighborhood and that he told Linda Kasabian to get rid of the wallet once he realized it was in the car not because he intended it as a false clue but because it was "hot."

Thus, as to the trajectory of Rosemary LaBianca's wallet on the night of August 9-10, 1969, here is what I think could have happened:

After Manson departed the LaBianca house he was joined at the car on Waverly Drive by Charles Watson, who had left the LaBiancas briefly alone and subdued in the house. (Both Manson and Leslie Van Houten have memories of Watson returning to the car.) At the car, Watson passed Rosemary LaBianca's wallet to his partner in love and crime, Linda Kasabian, who kept it concealed as she, Manson, Susan Atkins, and Steve Grogan drove off.

After a night of cruising around Greater Los Angeles (and with more to go), it was time to fuel up Johnny Swartz's 1959 Ford. In those days gas stations were not as prevalent as they are today, and the Standard/Denny's complex would have been remarkable. Because of Manson's awareness it's possible that he already knew about the station and predetermined it as a destination.

At the station it's possible that Linda Kasabian produced the wallet when time came to make the gas purchase and Manson became aware of its presence and asked her where she got it. When she told him he told her to get rid of the "hot" wallet by placing it in the toilet tank in the women's restroom.