The Last of the Manson Girls Film Review 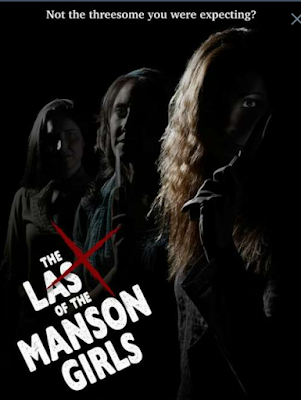 The Last of the Manson Girls (2018) is a dark comedy/black satire entry in the Mansonsphere film genre. Trippy, decidedly weird, and kind of quirky, this low budget film starring unknown actors might not be to everyone's tastes, but it is definitely worth a watch because it deals with a few aspects of the TLB saga that are typically in the background in the other movies. For anyone interested in seeing a 'Manson movie' without Manson, and for anyone interested in seeing some of the other women in the Family get some screen time, this one is absolutely worth your time. It clocks in at about 73 mins and can be purchased digitally on Amazon Prime for 2 bucks for the standard def version. The high-def version is a couple of dollars more, but I'm not sure if it is worth it due to this being a low budget movie.

Based on Paul Krassner's often bizarre account of his supposed acid trip with Squeaky Fromme, making the movie a fictionalized account of a likely fictionalized encounter, the movie features Mr. Krassner's drug fueled encounter with Squeaky, Sandy, and Brenda (Nancy). Along the way, he is also introduced to the possibility that there was a government conspiracy behind the crimes. Lenny Bruce even makes an appearance in the bathroom at one point. Do not watch this film if you want to see anything dealing with the murders, or anything related to the courtroom and trial. It is purely speculative fiction/satire. There is little to know historical accuracy.

The crimes are only mentioned briefly and are not shown at all. The focus is solely on the three girls, which is actually somewhat refreshing. Nancy is almost never seen or mentioned in most of the mainstream films, and Sandy is very often never seen either. Squeaky is generally given a few lines, if any, and often relegated to having her only function being the 'girl that has sex with George Spahn.' Keep in mind, this is not an in-depth character study of any of the women, but it is interesting to see them front and center. Charlie is not seen at all in this film.

None of the actors involved have extensive film credits, either before or after this movie. They all do a decent job however, with Elliot Kashner (Paul) and Jen Bevan (Squeaky) probably doing the best job. Cindy Marie Martin plays Sandy as a spacey flower child type, Sarah Taurchini channels Brenda at turns as exasperated, surly, and sarcastic. Jen Bevan as Squeaky plays her as thoughtful (at times philosophical), the keeper of the flame so to speak, and always on the outside of society. At other times she alternates between menacing and overly friendly.

The movie kicks in after Paul receives a coded message from Manson to call Squeaky. He goes to meet her at her apartment. After that, the movie is primarily Paul and the three girls interacting in various ways. Some of the conspiracy theories are touched on as Paul meets with radio host Mae Russell and Laurence Merrick (later shown in a clip getting gunned down in a parking lot, with it being implied that he knew the gunman/woman).

One of the earlier standout scenes in the movies occurs when Paul first enters the apartment. Unsure of his intentions and trustworthiness, the girls squabble back and forth in what could have been a scene out of a roommate sitcom. All that is missing is a diner/coffee house (would America ever be ready for a Manson girls' sitcom?)

Throughout the movie, the girls seem to have mixed feelings about their public image as crazy cult members. At times they seem to enjoy it, particularly when scaring Paul about what happens to snitches (Chelsea smile anyone?). Other times, they seem to regret it. One of the best lines of the movie is given to Squeaky: 'of all the things I saw myself becoming, I never envisioned being something that people were afraid of.' Another scene that stands out in this regard is when Squeaky lets Paul wear the vest they have been embroidering, and actually seems worried that he is still afraid of them.

The ability of the Manson women to evoke fear, sympathy, and to some extent desire is explored throughout the film. From a conversation about having sex with them only if your back was against the wall, because nothing 'levels the high like worrying about being stabbed,' to a bathtub talk with Sandy in which she shares her surgery scar story, turns into a mermaid, turns into 'crazy Sandy,' then turns back into being 'sad Sandy,' the movie does a good job of showing these contradictions.

Another great scene involves Paul and the girls dancing with each other, before the girls become knife wielding zombies, bathed in red light, coming for him. Also worth mentioning is a scene where the girls and Paul fall asleep together on the floor, resting on each other, the girls sleeping peacefully, and Paul unable to sleep, eyes wide open.

The film has quite a few good lines. Some highlights:

- Paul encounters Squeaky wearing her red assassination robe during his trip, and asks what she is wearing- 'Destiny.'

- the Ghost of Lenny Bruce to Krassner- 'there's nothing sadder than an aging hipster.'

Probably the best scene in the film is during the acid trip when Squeaky and Paul are in a sort of half animated dream world, where Squeaky talks about her father and replacing her father with Manson. Her explanation that her father gave her everything except for love and that she replaced a monster with a monster who at least loved her is a great scene.

Overall, The Last of the Manson Girls is definitely worth watching, if just to see some of the other girls get some screen time. Yes, it is a low budget affair, but at this point in time we are unlikely to see a Manson related film with a moderate to big budget, so we have to take what we can. We are unlikely to ever see a film where Brenda and Sandy speak, if they are even seen. The screen time given to the girls is what makes this one worth a look.