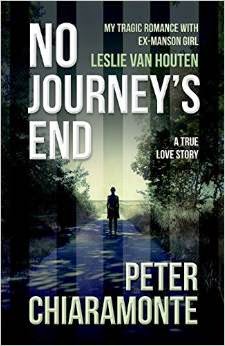 Thanks to loyal reader Ouija Broad for offering up this review for your reading enjoyment!

This book is like rummaging around in the $1.00 bin. There's a lot of junk, but keep looking and you will find some valuables.

* This is the most complete portrait of LVH that I have read, at least a well-rounded portrait of who she was at the time her involvement with Mr. Chiaramonte. Through her correspondence, a picture emerges of a woman who is warm, earthy, kind, and devoted to her friends and family.

* Mr. Chiaramonte makes some astute points about the how and why LVH is still incarcerated, specifically citing the politics and fiscal concerns that may keep her in jail for life.

* In “Restless Souls”, Stephen Kay is a tireless fighter of justice. In this book, he is a wormy, often confused opponent who fights dirty.

* Two letters from Charlie Manson to LVH are clear insights into the manipulative mind of CM. His letters reflect a barely literate man who is a master of manipulation and mental mind games. The most interesting part of the letters is the lack of goofy ramblings associated with “Crazy Charlie.” Here, he means business and gets right down to it.

* This book tells us more than we ever wanted to know about Peter Chiaramonte. It should have been titled, "The Autobiography Of A Man You Have Never Heard Of, plus some stuff about Leslie Van Houten." I admit I skipped whole pages of details about Mr. Chiaramonte's life and friends.

* Mr. Chiaramonte meets LVH's family - mother Jane, father Paul, siblings Paul, Jr., David and Betsy. I wanted to hear more about them and how they feel, but Mr. Chiaramonte's speaks of them only as props to his own story.

* There is some incorrect information in the book. For example, Mr. Chiaramonte cites that he "read somewhere" that Tex Watson dropped out of high school. Not true. There is also unsubstantiated claims that he just throws out with no reference, such as citing LVH as being so smart that she is considered to be in the top 5 percent of Americans. Really? How did he come up with that?

Was the book worth the money? I think so, for the gems it does reveal about LVH. Again, though, you will have to wade through a lot of junk to get to the gems in the book.