1959 was a busy year for Charles Manson, he had been released from federal prison at Terminal Island in September 1958 and was on five years parole.  By November of 1958 he had learned about pimping from his roommate, a Malibu bartender.  According to Bugliosi, (1994 page 198) unknown to Manson he was being watched by the FBI because the FBI was looking for a former roommate of the bartender.  Reports were made to his parole officer about Manson's pimping activities, the parole officer had a talk with him, told him to quit pimping which Manson denied he was doing.  The parole officer felt it was only a matter of time before Manson was in more trouble.

May 1, 1959 Manson was arrested for trying to cash a forged US Treasury check for $37.50 at a grocery store in Los Angeles, he volunteered that he stole the check from the mail, two federal charges. ($37.50 in 1959 would be worth $313.92 in 2017) Manson was turned over to Secret Service agents for questioning.  During the questioning the stolen check disappeared, it was thought that while the Agents had their backs turned Manson ate the check.  However, the charges remained.

Manson's attorney made a deal with the prosecutors to have the mail theft charges dropped if he would plead guilty to the forgery. September 28 1959 Manson went before a judge.  The probation department, a court ordered psychiatrist and the US Attorney's office all recommended prison time but an impassioned plea by Leona Musser aka Candy Stevens swayed the judge to give Manson a suspended 10 year prison sentence with five years probation.  If Manson screwed up during the five years probation he would be sent directly to prison for his full ten year sentence.

Sometime during 1959 Manson had created a company called 3-Star Enterprises, Night Club, Radio and TV Productions with a man named Tony Cassino.  Manson's business card said he was president and Cassino vice president.  This business was operated out of Manson's residence at 6871 Franklin Ave. #306 Hollywood.  The purpose of the business seemed to have been a lure for women that could be turned out for prostitution, it was never a bona fide business only one that existed on business cards.  The apartment where Manson lived and worked out of was less than a block from Rosina Kroner's Franklin Ave. apartment where he would shoot Bernard Crowe 10 years later.

December 1959 saw Manson arrested twice, the first time for taking Leona aka Candy Stevens and another woman across state lines for the purpose of prostitution, from Needles CA to Lordsburg NM.  This was a violation of the Mann Act a federal crime.  Manson was held and questioned but ultimately released.  According to Bugliosi, Manson thought he had beat the rap.  Bugliosi also says that at this point Manson married Leona so that she would not be able to testify against him should the charges resurface.  This does not seem to be true and we will get to that later in the post.

Manson's second arrest that month was December 31 1959 for auto theft and burglary.  The charges were dropped for lack of evidence and law enforcement focused their investigations for those crimes on Manson's then roommate Harold Estel Blevins. 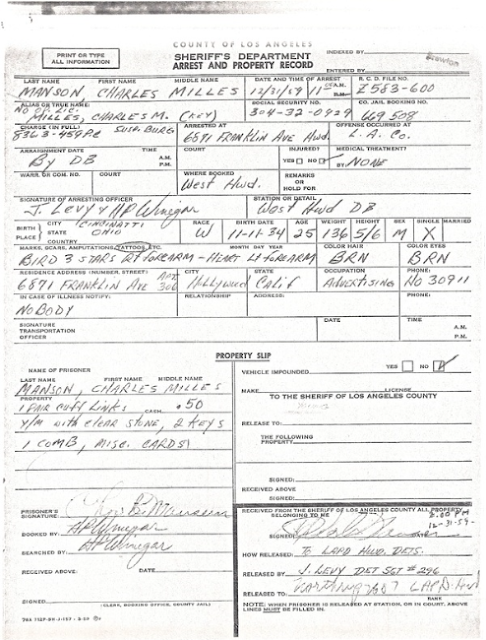 Manson knew things were getting hot and it was only a matter of time before some of the things he had been charged with would catch up with him.  In fact authorities were building a case for the Mann Act charges.

April 27 of 1960 a bench warrant was issued for Manson because a Federal Grand Jury had indicted him on the Mann Act charges.  Manson was no where to be found.

June 1 1960 found Charles Manson being escorted from Mexico to the US Marshal's at the border in Laredo Texas.  He was being kicked out of Mexico for being an "undesirable alien".  He was held for the Mann Act charges awaiting transfer back to California.

Once Manson was extradited to California and placed in federal custody the forged US Treasury check eventually came back to bite him.  On July 14 1960 the indictment for the Mann Act charge, also known as the White Slave Traffic Act (WSTA), was dismissed according to Manson's rap sheet.  On July 21 1960 the forged check reared its ugly head.   Manson knew that he had the 10 years suspended sentence hanging over him and fought the charge, he was able to it hold off for a while but on July 10 1961 he was held to serving his suspended sentence at McNeil Island in Washington state essentially for a probation violation.

Meanwhile, Leona who had been arrested for prostitution, had done some LA County jail time in 1959 and had testified to the Federal Grand Jury April 1960 in Los Angeles regarding the prostitution across state lines had cut and run, she went to Colorado where her family was living.  She was pregnant with Charlie's second son Charles Luther  Manson.

Charlie had some opinions about Leona, their alleged marriage and even the paternity of their son which he related to Michael Channels in a 2002 letter.


Translation: Leona Manson 1959 had a son Charles Manson Jr. in Denver CO I wondered about him-She is a tricky bitch I called her Wonderwoman  We got a blood test and papers but never got married- She just forged the papers and filed divorce and got custody of my son

I was unable to find a marriage record for Charlie and Leona and there are good records for marriages in California during 1959 and 1960.  Manson might be right about them taking out a marriage license but not using it.  Although he is wrong about the year Charles Luther Manson was born.

It might be that Leona told her parents that she and Manson were married because of the stigma of having a child out of wedlock at that time.  Consider the divorce papers which do not state an exact date for the marriage.  The papers simply say they were married in the Spring of 1959. (section 2 of the first page) There are not too many women that don't remember the date of their marriage. 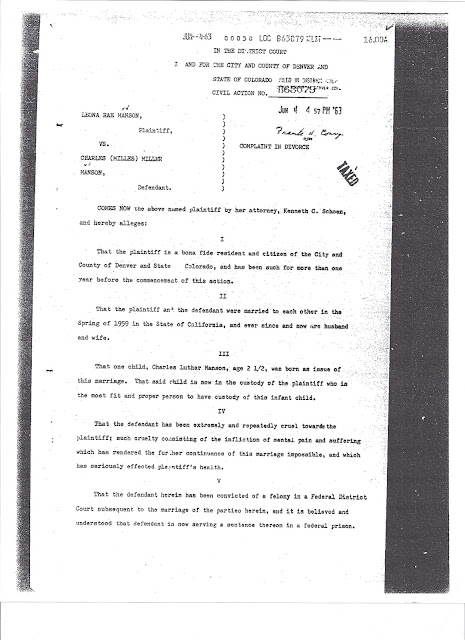 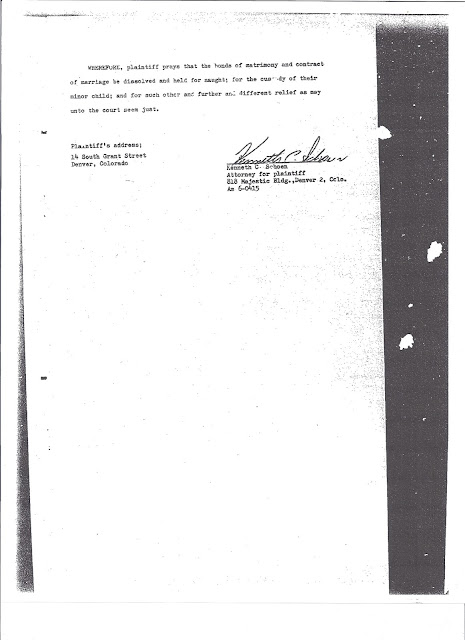 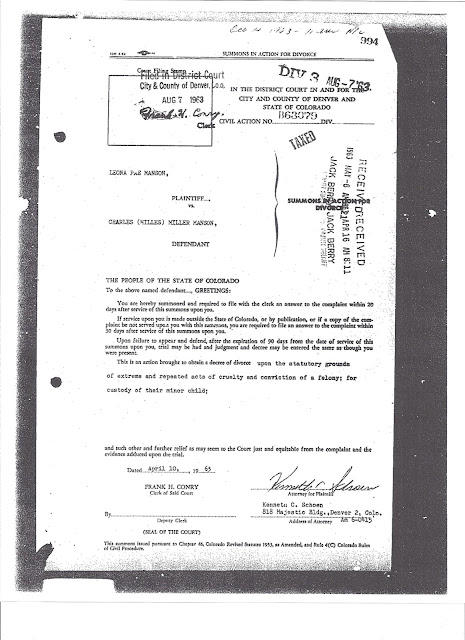 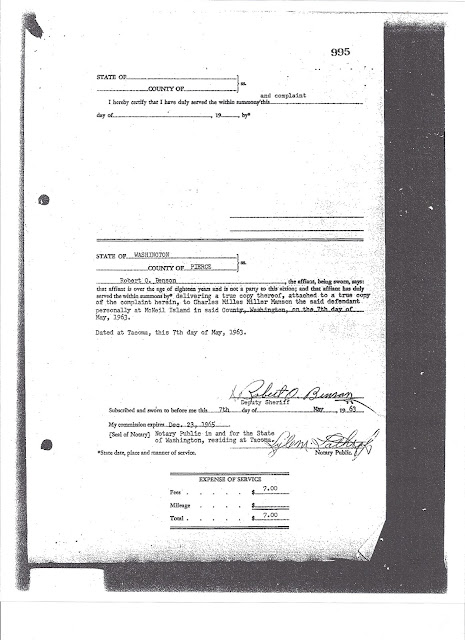 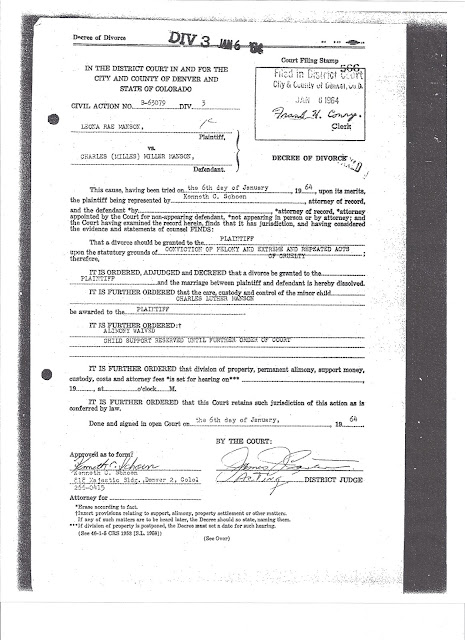 I also have a little bit on Charles Luther Manson.  According to Social Security Claims Index, Charles Luther changed his name to Jay Charles Warner in 1976.  This gives his date and place of birth as well as his death date. 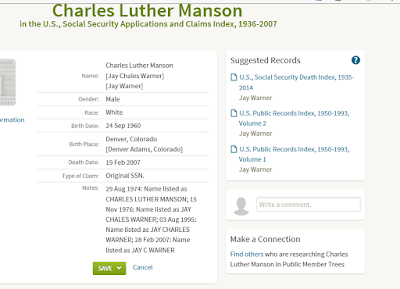 Let's pause here and reflect.  How is it possible that both Rosalie and Leona changed the names of their sons from Charles Manson to Jay?  Also, both of the Jay's died in Colorado.  oo--ee--oo 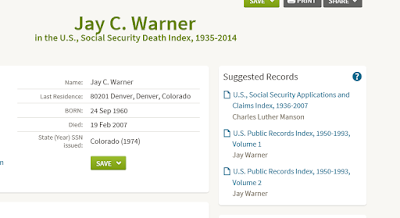 Here is a record of a traffic ticket that was issued to Jay Warner that gives his physical description.  He was relatively tall considering the height of his supposed father and he had blond hair and blue eyes.  Leona was fairly short, too, going by her yearbook pictures in group shots. 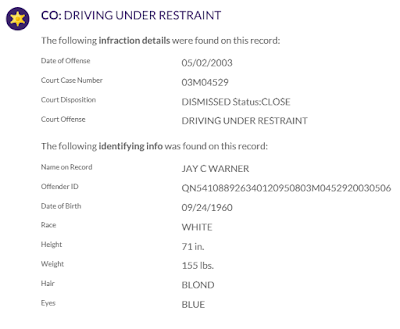 Manson served his 10 years, less time off for good behavior and was given a mandatory release March 21 1967.  A mandatory release differs from a release granted by a parole board hearing.  The terms of parole are less stringent and the time on parole after the release is limited to the time the prisoner would have served had he done the entire 10 years of the sentence in prison.  In Manson's case he was taken into custody June 1 1960 by the US Marshal's in Laredo Texas, starting the clock.  His time on parole would have been finished by June 1 1970.