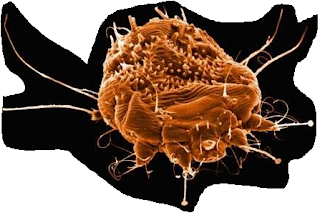 Imagine......you are in a dark, hot, cramped room with 20 or 25 other people, sweating, coughing, feeling down-right dusty, dirty, itchy, and feverish while trying to sleep after a night of passionate, but uncomfortable group love-making. Although you haven't had access to a shower, bathtub, or even a regular toilet in months, you stay, even if the discomfort is overwhelming. This group of people you call your brothers & sisters have shared everything, including food, clothing, bedding, sex partners & body fluids. The stench coming from the stained mattresses is enough to make a monkey puke, but you just can't think of any other place you would want to be. Of course, slowly the physical discomforts start to outweigh the camaraderie you have shared with your special family. You notice in the morning, after not sleeping a wink from the intense itching & burning coming from your buttocks that tiny, red pustule-like blisters have appeared in the webs of your fingers, and toes. You really start to feel ill now, especially after you try popping one of many hot, hard boils that have constantly been appearing & reappearing on your body throughout the last, few months. The group you have been with over the last year seems to have the same thing, and it has become common place to see pustules, blisters, scabs, bites, and lesions on the skin of just about everybody you are near, not to mention hearing all the complaints of frequent, burning sensations while urinating, and yellow/green discharge coming from the genitals of just about everyone. Your family seems to be grouchy, constantly hungry, itchy & dirty, and feeling like shit most of the time, but nobody seems to want to leave. The music, drugs, and oneness with each other is all that matters! And, of course, you couldn't ever abandon Charlie, could you?

The above narrative is probably an accurate description of a "day-in-the-life" of a typical Manson-Family member starting in the summer of 1969. Things really started turning ugly for this group of people, and their kinky, fairy-tale lifestyle started giving way to a more commando, militant life, that wasn't all flowers, music, good sex & fun. These people were living in cramped, dirty "shacks" with no running water at times. They also had a poor diet, eating food from dumpsters, and a lot of sugar. All of this could not have helped their health. In writing this piece, I really started to wonder about the different ailments some of them (or all of them) suffered from, so....I contacted Dr. David E. Smith of the Haight Ashbury Free Clinic, who was kind enough to answer some of the questions I had concerning this topic. As he remembers it, this group suffered from..... you guessed it, scabies, and staph infections due to poor hygiene, along with everyday, old-fashioned STD's. He said the skin ailments were treated with medications, soap & water, and pHisohex, which was a medicated cleaner used in the 1960's primarily to treat acne. He did say that these conditions appeared in a lot of communes at the time, and weren't unique to Manson's group. We would like to thank Dr. Smith for taking time out of his busy schedule to answer my questions! 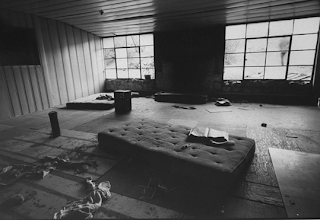 Here are a few examples of where I read about skin problems, infection & personal hygiene:

1.) Sadie, during her grand jury testimony was asked if she was barefoot the night of the Tate murders. She answered "Yes, I was. I had quite a few sores on my feet from infection, and I couldn't wear shoes.

2.) During one of many police interviews, Stephanie Schram is asked by a Detective Gleason if she remembered seeing a girl out at Spahn's ranch that had infections on her legs that never healed, and left scars. Stephanie told the detective that she did, indeed remember who it was that had these. It was a girl by the name of Gypsy. She also told the detective that Gypsy was fat, and was staying out at Devil's canyon all the time. Was she banished, I wonder because of her weight? That seems a little bit egotistical. I thought they weren't supposed to have egos anymore?

3.) In Paul Watkins book "My Life With Charles Manson" he mentioned seeing boils all over Bruce Davis's neck while they were out in the desert.

4.) In Paul Watkins book he said that starting in the spring of 1969, the Family no longer had access to bathroom facilities, and were living in tents down by the creek at Spahn ranch. They did rinse off in the creek, but didn't have access to showers/bathtubs. Imagine the smell. Wouldn't have been pleasant. He did mention that they had, at one time been very clean, because Charlie demanded that everyone pay close attention to personal hygiene, and keep themselves, clothes, and the musical instruments spic & span. Things changed, though.