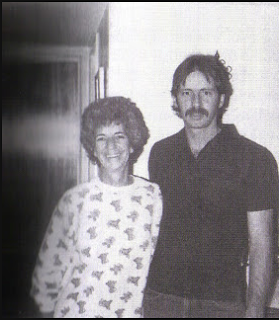 We know that Charles Milles Manson Jr. aka Jay Charles White committed suicide.  The general reason for the suicide is presumed to revolve around the premise that his father Charles Manson had something to do with his decision.  There have been online stories that Jay committed suicide after a prison visit to Charlie but  Jay never, to anyone's knowledge, visited Charlie in prison.  Jay wrote his father in prison but never got a direct reply to his letters.  I have spoken to someone who told me that Jay visited with TJ Walleman and his wife Ansom sometime before his death and that seems to be as close to communicating with Charlie that Jay was able to accomplish.

Jason Freeman seems to believe that Jay could not live with the fact that he was Charles Manson's son.  Jason's belief is likely pure supposition because Jason never saw Jay White after he was around nine years old, according to statements made by Jason's mother Shawn in the book Hunting Charles Manson by Lis Wiehl and Caitlin Rother page 266. (I have a readers edition of the book so the page number might off by a couple of pages)


I believe that Jay's suicide was most likely due to fact that he was heavily in debt with no end in sight in his near future because two of those debts were child support.  I have a few documents to support my belief.  While being the son of Charles Manson may have weighed on him, he had lived with that fact for 37 years and had done nothing to make his life any better than his father's life had been.  Jay hadn't finished high school, he had trouble holding a job, he drank and did drugs.  He seemed to blame outlying circumstances rather than his own actions for his troubles.

In 1985 when Jason was nine years old Shawn Freeman Moreland filed a paternity suit with Tuscarawas County Ohio to try to obtain child support for Jason from Jay White aka Charles Manson Jr..  Shawn had not stated a father on Jason's birth certificate.  The earliest date I could find for the paternity suit was Sept. 13, 1985 which was the postmark on a certified letter sent to Jay in Texas and signed by Jay.  The paternity suit would follow Jay from Texas to Nevada over the years until his death in 1993. 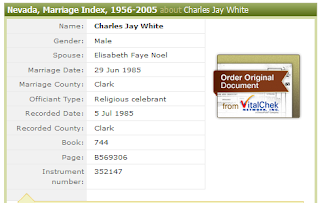 Apparently Jay and Elisabeth lived in Texas though because their son Paul was born Jan. 25, 1986 in Galveston Texas.  By 1988 and perhaps sooner Jay and Elisabeth had moved to Henderson Nevada.  They were both house painters.  Elisabeth wanted a better life than that of a house painter so decided to go to college and earn a degree.  According to my sources Elisabeth tried to talk Jay into getting his GED and go on to college, too, but he wanted none of that.

Between 1988 and 1992 Elisabeth went to the University of Nevada - Las Vegas and earned a Bachelor of Science degree in civil engineering.  By early to mid 1993 Elisabeth had grown apart from Jay and filed for divorce which was granted June 9, 1993 just 20 days before Jay's suicide on June 29, 1993.

By the time of his death Jay was in debt to the Tuscarawas County Child Support Enforcement Agency for nearly $18,000 for Jason's child support.  He had future child support payments for son Paul that would have totaled a minimum of $24,400.  if the support amount of $200. per month was never raised before Paul reached 18 years of age.  He had the debt of paying for half of his ex-wife's college education and couple of other bills.  Also, if Jay were to not pay the child support his wages could be garnished.

It's doubtful that Jay White was thinking much about his infamous father when decided to take his own life.  He was probably thinking about what a lousy future he had in store largely due to his own actions.  You can blame your parents for how you turned out but you can only blame yourself if you stay that way.