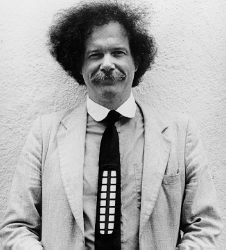 ﻿
Los Angeles Free Press Vol. 7 No. 45 Issue # 329  Nov. 6, 1970
continued....
﻿
﻿
Frank Fowles, the District Attorney of Inyo County, testified about some sound tests he conducted recently at Myers Ranch in the Death Valley National Monument.  His testimony was given to add strength to Barbara Hoyt's testimony that she heard Susan Atkins say that Sharon Tate was the last to die because she had to watch the others die first.  The overheard conversation allegedly took place inside the Myers Ranch, which is about a quarter of a mile up the wash from the famous Barker Ranch.

Fowles really wasn't needed at the trial, but probably was brought down by the prosecution as a courtesy measure.  He did not testify about the famous file of nude photos of the Family, including the whispered-over Manson-Little Patty-Clem Brenda circle slurp.  Nor did he testify about the camera equipment confiscated at the Barker Ranch in October of 1969 or the film therein which, according to authorities, when developed turned out to be blank.

The continued search for the head of Shorty O'Shea(sic) continues unabated.  There once was a stuntman ranch hand at the Spahn Ranch who disappeared.  His car, loaded up with all his gear (minus his matched pistols) was discovered in Canoga Park after he disappeared.  According to many sources, he was beheaded after a few weeks of friction with certain people.

Anyway, one Vern Plumlee, a former "member" of the Family who is currently held for some stabbing in Long Beach, led the police recently on a skull search of the burnt Spahn Ranch, which included a search of a large water tank high on the hills north of the ranch.  Vern claimed to the fuzz that Clem told him that Shorty was buried by a campfire down by the creek by the cave, but only chicken bones were discovered.  This is about the fifth time that a massive search for Shorty's body has been undertaken.

We checked with Thomas Noguci, the LA County Coroner, when the rumors about the Sheriff's Office looking anew for Mr. O'Shea(sic) were spreading about.  It is known that Devil's Canyon was held to be sacred long ago when Indians lived nearby.  Well, evidently when they were digging in Devil's Canyon early this year for Shorty, they uncovered some sort of Indian burial ground, a fact that hampered operations in that each skull had to be examined as to its age and likeness to the one sought.  They have not found Shorty.

Vern Plumlee is famous in Mansonian circles in that, armed with a sawed-off shotgun, he creepy crawled the homes of Jack Jones, the star, and Marvin Miller in July of 1969.  From the home of Jack Jones, creepy crawled at 2AM even though the lights were on, the c.-c.-ers took only a cowboy hat.  For verily they creepy crawled only to experience the tidal wave of the Great Fear.

One of the last prosecution witnesses is to be Dianne Lake, who had lived with Charlie Manson for almost two years prior to her arrest in Death Valley in October 1969.  After her arrest and after further arrests regarding the murders, she was placed in an insane asylum through a frightening police state-like collusion of the Los Angeles District Attorney, the Inyo County District Attorney and hospital authorities.

In late December 1969, Dianne Lake (known as Snake to the Family) was extensively interviewed by one Jack Gardiner and one Buck Gibbons (famous in that he confiscated Sandy Good's breast pump during the Barker Ranch raids) about activities of Manson and the Family.  Mr. Gardiner and Mr. Gibbons. who are employees of the Inyo County District Attorney's office, came up with some interesting data.  However, what power on earth could have predicted that the pretty and nubile Miss Lake would turn up a year later with Mr. Gardiner as her foster father!?

Anyway, early this year she was admitted, as a minor, into Paton State mental hospital.  Her legal parents tried to visit her and to claim her but were told to fuck off.  Hospital lackeys diagnosed her as follows: "Diagnosis: 295.0 Schizophrenia, chronic undifferentiated type (with group delinquent reaction). 308.58 Behavior disorder of childhood and adolescence. 304.7 Drug dependence, hallucinogens (prominent).  Prognosis: Extremely guarded for any improvement in this girl."

A Conservator was appointed for her- the Inyo County Coroner.  She remained in the nut hatch until this past August, even though she was reported by her captors to be sane about a week after she was committed.  After her release from Paton Hospital she has lived with her foster father.  In coming to court to testify the other day she bore a startling resemblance to the English cousin in the Patty Duke Show, with her hair combed in a similar manner, her faced scrubbed shiny and a white sailor shirt and blue skirt covering her body, which seems to be tending towards chub-chub.

In honor of her impending testimony the x-browed girls vigiling outside moved inside- the group of snuff sub-alterns moved inside to wait for Snake Lake.  As she walked into court escorted by her "Father" and by one of those smiling deputy DA's who took the place of Aaron Stovitz, Squeaky yelled out, "You ain't plastic and you know it. You can't turn your back on love."  As I write this Snake hasn't actually testified but as of a hearing on her ability to remember events of summer-fall 1969, she has been adjudged competent to testify.  She is expected to testify regarding conversations she heard about the death of Rosemary LaBianca and also about the disposal of certain items pertaining to the LaBianca crimes.

In addition, as of certain interviews we have undertaken over the months, Miss Lake has some interesting data in her mind regarding the Gary Hinman murder, data which would in our opinion cast considerable light on the reality of that grim tragedy.

On Friday, October 30, there was a hearing to declare Tex Watson insane. Everybody knew that Watson was out of it.  The former all-district halfback for Farmersville, Texas High School was down from 190 pounds to 110!  One kept hearing from various officials, "Aw, he's just malingering!"  But there was and is some danger that he will die, and the last thing Sheriff Peter Pitchess wants is for Tex Watson to die of malnutrition in the Los Angeles County Jail.  So the human skeleton of Charles Watson has been shipped to Atascadero State Hospital, where probably they will thorazine him up for a few months and feed him some sort of liquid mounds bar through the nose for a while and then ship him back for trial- that is, if he doesn't die; and the secret gossip in the Hall of Justice is that death is imminent. The report to the court reads that he is "rapidly reverting to a fetal state."  And you can better believe the DA is not going to let Tex Watson into a nut hatch unless he is really in heavy orbit.  Even now, however, officials are very hesitant to say he is really insane, but rather say that "he's doing it to himself."

If he dies, it will be the fault of the District Attorney's office- because Charles Manson in front of witnesses, offered to bring him out of it.  Manson is alleged to have said, "Just give me 20 minutes with him alone and I will bring him back."