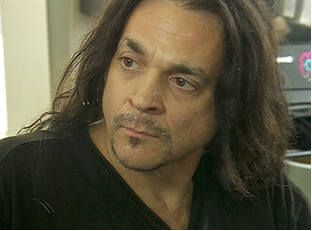 Photo from insideedition.com
﻿
Here's something that seems to have slipped by unnoticed.  In an effort to verify whether or not Matthew Roberts is indeed Charles Manson's son CNN did a DNA test on Roberts by comparing his DNA to Manson's alledged grandson, cage fighter Jason Freeman.  To both men's surprise there was no DNA match between the two.

In an effort to try to understand why Robert's or anyone else claiming to be related to Manson couldn't just petition the State of California to be allowed to do DNA comparisons from what is in the prison system records I learned that Manson, as well as any of the others convicted in the "Manson Murders" most likely do not have their DNA on record.

I found this document regarding the collection of DNA from California inmates. It is widely assumed that because a person is imprisoned for a felony crime that his DNA is automatically taken and entered into a database. After reading this document I do not believe this is the case. It seems that the law requiring the DNA collection is not retroactive but only applies to those arrested after a certain date. Here is a quote from the document--

" Collection of DNA samples from an adult arrested for a felony offense must be based solely upon the offense that was the basis for the arrest.

The January 1, 2009, provisions governing DNA sample collection from adults arrested for any felony offense are not retroactive and so do not permit collection for arrests that took place prior to 2009"

Here is a link to the document so that you can study it yourself and see if I have reached the proper conclusion. It is a five page pdf. 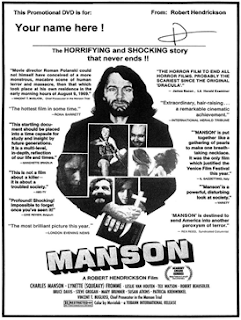 The real question is WHY would the government send an under cover agent into the dangerous Manson Gang?  For a limited time,anyone can get a signed 1973 MANSON DVD (including 1st class shipping)
"IF" they mention "EVILIZ OFFER" and use PayPal.  ONLY $25.00  HOLLAR!

EMAIL:    rarefilms@yahoo.com
Happy Holidays To All!