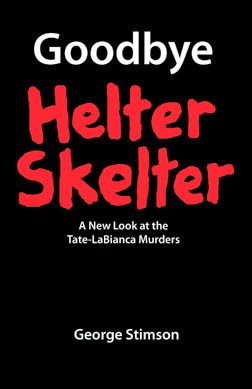 Let me begin by saying I enjoyed the book immensely. I looked forward to its release because George Stimson has had decades-long access to Manson and especially to Sandy Good (and her collection of audio files) not to mention Lynnette Fromme. I knew going in that the slant would be towards Manson's innocence, but I believe that Stimson does consider him innocent. Stimson took great care to cite his sources. He interjects his opinions, but he develops those opinions incrementally and (almost) convincingly. I did not agree with him on a number of things but I won't focus on those. You'll have to read it for yourself. Despite disagreeing on a number of major points, I do though give it a thumbs-up. It is a must TLB read.

The book begins by running through well thought out chronologies of the mood in the USA during the 60's given the Vietnam War's division in American idiology, the largest such division since the civil war. It also takes the reader through an excellent chronology of the Manson Family from 1967 - 1969. Most of this we are already familiar with. Stimson artfully colors it with first hand accounts from Manson and various members from a variety of sources, not the least of which are Stimson's and Sandra Good's collection of taped telephone conversations. These are fascinating perspectives that we haven't been privy to until now.

The first motive bone thrown to us is on page 104. During a phone conversation with Stimson Manson says, discussing the "Magical Mystery Tour" vibe at Spahn Ranch.

The first episode covered is the shooting of Bernard Crowe. The Family, contrary to most stories had been planning on leaving Spahn for quite some time, not as a spur of the moment decision sparked by the events of August 9th & 10th. In an attempt to help the Family accumulate provisions for the stay at Barker Ranch, Tex comes up with an idea "that would eventually not only lead to the shooting of Bernard Crowe and intensify pressure on Charles Manson and everyone else to get out of the city, but would also create a lethal debt and an underworld favor owed".

Tex commits the theft of Crowe's money. Crowe calls the ranch and threatens to burn it, rape the girls and kill everyone. Manson's overriding concern is not the threats but the girl (Rosina) being held captive by Crowe as a result of Tex's ill-conceived plan. Manson asks for help but is turned down by Bobby B, Bruce, and the now hiding Tex. TJ Walleman is the only one with any military training agrees to help. But, TJ freezes in Crowe's apartment. Manson offers his own life by passing the gun to Crowe. Crowe informs Manson that he'll kill everyone instead and passes the gun back. Manson shoots. News reports the next day of a slain Black Panther are confused by Manson with the Crowe shooting, as Manson believes Crowe is dead. Stimson says regarding this mistaken conclusion:


"Although this conclusion was a mistake, it's consequences would greatly affect many of the people at Spahn's Ranch in the following weeks. The belief that Charles Manson had killed a Black Panther is one of the most important and yet most overlooked occurances in that summer in terms of understanding the murders that followed it."

The need to get out of LA and away from the Panthers was now paramount. More importantly, in the eyes of the Family, Manson had killed to protect them - and showed how far he'd go to do so.

According to Stimson Gary Hinman was "a small time drug dealer who manufactured and sold hallucinogens." Beausoleil, in an attempt to impress the Straight Satans sets up a deal of 1000 hits of mescaline for $1000. The Straight Satans's visit Bobby shortly after and rough him up claiming the mesc was bad.

So, Beausoleil goes to Old Topanga Canyon road with Mary & Sadie along for the ride to get his money for the bikers. Hinman thinks Beausoleil's attempt to get the money back is a scam. Things don't go well and Manson shows up to "show that boy how to stand up towards his own problem." He arrives and cuts Hinman with the sword to distract him from the gun he's holding, flips it to Beausoleil and leaves.

The inheritance motive was nothing more than the prosecution creating a motive for Manson to order the robbery that results in murder.


"But when CharlesManson left the house on Old Topanga Canyon Road there was no thought of killing Gary Hinman. Hinman had assured Manson that he had no beef over his cut face. Those who stayed behind after Manson left fed Hinman and administered first aid to his wound. (People who intend to murder someone usually do not administer first aid to their victim before killing them.) The killing only occured after Hinman went back on his word not to go to the authorities over his slashed ear."

Manson assembles them and sends them off no differently than he had many times before - to do a garbage run. The knives are for cutting the bad parts off of the fruit. The changes of clothes are to be changed into while they stop at a laundromat to clean the dumpster-soiled clothes.

(Yes, you would be correct in assuming I doubt this part).

Manson only is away from the car for 3 or 4 minutes. He looks inside the True house and determines that Harold is not there. He walks into the LaBianca house and has a cordial conversation with Leno (who is not alarmed or frightened) about Manson's not knowing anyone lived there. Leno replies something about having just moved back.

The reason the 3-4 minute timeline is correct? Linda Kasabian says that they were gone long enough to smoke 3/4 of a Pall Mall cigarette. This of course is not long enough for Manson to have done all the things that were attributed to him at trial.

(The 'ever truthful' Kasabian cigarette timer is infallible. Following along, children?)

Stimson believes (as most of us do) that the Helter Skelter motive is fantasy. What Stimson attempts to do in his book is to convince the reader that the REAL motive is the copycat or "get brother (Bobby) out of jail" motive:


To begin with, it must be conceded that the copycat plan was not a good idea. If the purpose of the killings subsequent to Gary Hinman's was to make the police think that the people responsible for Hinman's death were still at large it is unclear why a series of  copycat crimes would necessarily make them think that Bobby Beausoleil was not involved in the murder. They already had a very good case against him. His fingerprints had been found at Hinman's residence and he had been arrested in the dead man's car with the murder weapon still inside the vehicle. If similar killings were committed, why would the police think that Beausoleil was innocent? Wouldn't they likelier think that he must have had accomplices in the Hinman murder who were still at large (which in fact was the case)?

But, despite this fundamental flaw the ill-conceived and executed copycat motive was the main reason for the Tate-LaBianca murders.

According to Stimson's theory Tex Watson and Susan Atkins were fueled by their secret stash of methamphetamine. The "get brother out of jail" motive was hatched by the girls and Tex Watson. Manson was not a part of it, nor did he order it.


[See], I thought [that I had killed Bernard Crowe]. And I got all with Tex and I said, "You caused me to kill somebody, man. You owe me. Susie, you owe me. I fought three guys for you that wanted to rape you. I kept you out of it, man. You owe me, you owe me and you owe me. You got me fighting all over this town for you, man, 'cause you won't stand up for yourself. I'm not the policeman, man. Go to the cops and get them to do your fighting."

Every time it's someone's turn to die, come and get Charlie, put him on the line, let him die. Put me out front and let me face it. Let me face everything that no one wants to understand or no one wants to look at. Let me take the gun and go off into hell with it.

So I said, "You owe me, mister, and when it comes time to pay this circle, this covenant, this family, this ranch, you'll pay your debt to all these people that feed you, and serve the same God that you serve...

So then I come back to Watson and I say, "You pay [Beausoleil] what you owe me."

I never directed traffic on no street corner about anything. Man, I haven't got time for that.

Admittedly, I couldn't wait to get to "The Real Motive" chapter, especially since I was teased by the part in the Crowe chapter involving Tex's idea that "would also create a lethal debt and an underworld favor owed". The "get brother out of jail" motive was a let down for me. BUT I give Stimson kudos for developing a thoughtful argument.