wikipedia:
"Blowback is a term originating from within the American Intelligence community, denoting the unintended consequences, unwanted side-effects, or suffered repercussions of a covert operation that fall back on those responsible for the aforementioned operations. To the civilians suffering the blowback of covert operations, the effect typically manifests itself as "random" acts of political violence without a discernible, direct cause... "

LtCol Paul James Tate, Sharon's father, was stationed at Ft. Baker, just across the Golden Gate Bridge from San Francisco at the time of the murders.  His military specialty was counter-intelligence  So was he working on behalf of the US effort in Vietnam?  But if so, shouldn't he have been stationed a little bit closer to the scene of the action?  Or if he was  working on behalf of US Operations for NATO, shouldn't he have been stationed in Europe?  What was going on in San Francisco that was of such importance to the US Army?

Well of course the Bay Area was still the capital of the Counterculture at that time, two years after the Summer of Love kicked it into high gear amongst the youth all across the country.  And it is known that the US Army was lending it's intel officers to an all-out effort to fight that social movement.

Jane Fonda, Heroine For Our Time by Thomas Kiernan, c.1982  pg197
The FBI*, the CIA*, the Army Counterintelligence Corps and other agencies had been turned into a massive combined political police force that infiltrated, spied on and sometimes actually engineered the activities of the "subversives who sought to undermine the American way."

*[Referring to the FBI's "Cointelpro" operations and the CIA's "Operation Chaos."]


Their primary tactic was to place informants and 'agents provacateurs' within the anti-war movement and other radical groups of the time.  The undercovers would try to get people involved in these groups to commit crimes, which would then cause them to lose public support. It also enabled the police to go in and crack heads, putting the radicals out of action.  Or they would try to raise tensions between different groups or within one group, to get the activists to expend their energy by fighting each other, instead of fighting The Man.  They even went so far as to target Rock 'n Rollers, merely for being symbols of the movement.

Was PJ Tate involved in this effort?  You have to consider the possibility. Patti Tate has stated that the family would move around every three years as they followed PJ from duty station to duty station.  If so,  PJ would have been in San Francisco during the Summer of Love, at the beginning.  Of course the Bay Area from '67 onwards was a 'target-rich' environment, in terms of counter-cultural elements.   These included the Black Panther Party, the United Prisoner's Union, the Students for a Democratic Society, Vietnam Veterans Against the War, the Diggers, the Merry Pranksters, the Black Muslims, the Aryan Brotherhood, the Church of Satan, and the Process Church of the Final Judgement, among others.

In previous threads I have explored the idea that covert forces--in local, state, and federal law enforcement--were working to manipulate and maneuver the Family into committing the murders, resulting in the demonization of hippies and the counterculture generally.

After Charlie was named as a suspect, did Col. Tate remember the Manson name from the files in his office?  Did he hear rumors from his colleagues that Manson was a product of this hidden war against the hippies?  Certainly PJ had a lot of connections and friends from other Federal agencies:

pg40
Patti: "Earlier that morning he'd (PJ) gone to Holy Cross with five of his friends from the FBI to set up a protection perimeter for our arrival. Along with providing protection, their other purpose was to look for suspects."


pg73
PJ to Helder: "...I'm confident that my network of connections can accomplish in one day what will take your men a week."

pg74
PJ: " I turned off the television. There were three other men in the family room, all friends from the US Department of Defense, all skilled investigators. After the murders, Guy was the first to offer his assistance. As an FBI agent, he'd spent twenty of his forty-nine years traveling the globe... "

Why did PJ have all these friends from the FBI?  Because he was working with them.  And that work had little to do with Vietnam.


Some people even give PJ credit for breaking the case:

Q: The Autobiography of Quincy Jones by Quincy Jones, c.2001
"....No one knew who did it until Sharon Tate's father, who was in military intelligence, led investigators to a guy named Charles Manson who had dispatched his followers to the Cielo Drive house with orders to "kill the pigs on the hill." "

But if PJ had some bigger role in solving the murders than has been acknowledged, could this be because PJ was just more diligent in his own investigation, or was it that he had inside information on the Mansonoids?

According to PJ, he may have discovered the Manson/Spahn Ranch link on his own, even before the detectives:


Restless Souls by Alisa Statman and Brie Tate c.2012  pg94
PJ surveils Cielo Dr. late at night (Sept./Oct?). Notices two choppers drive up to Cielo and the bikers try to jump the gate before guard dogs chase them off. PJ follows them in his car--they end up at... Spahn Ranch!

I think it's interesting that PJ allegedly went undercover as a hippie in the weeks and months after the crime as part of his own effort to find the killers of his daughter.  But few at the time suspected hippies.  They suspected black militants, dopers, doper dealers, the Hollywood crowd, S & M freaks, even Satanists.  Did PJ know something others didn't?

Sharon Tate and the Manson Murders,  by  Greg King,  c. 2000
pg262
"...Paul Tate had left his career in military intelligence and devoted himself to a personal search for her killers. He let his army crew cut grow long, grew a beard and submerged himself in the anti-establishment world from which he thought his daughter's killers had come. He had regularly spent long nights wandering through the Haight-Ashbury District and along the Sunset Strip* in Los Angeles in search of clues."

*Two places where Charlie and crew used to hang out at.

http://www.mansonblog.com/2016/02/charles-manson.html
Robert Hendrickson:
"I would like to add: It is entirely possible that the Manson Family was infiltrated by the F.B.I.
AND that Helter Skelter was influenced by same. ..  It might also explain WHY Col Tate's hands were TIED." 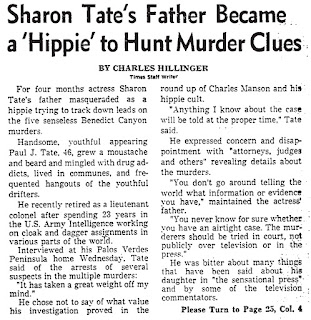 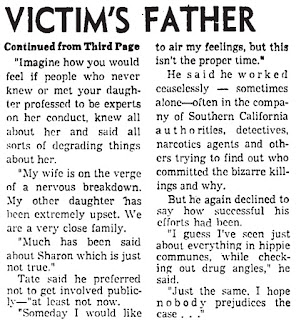