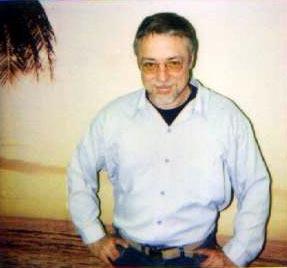 The following is a re-creation of a letter that was recently sent to a family member of  Gary Hinman. Re-creation was necessary because many parts were redacted to eliminate personal information. Bobby's words themselves have not been altered.

Most of the people who once were associated with Manson have blamed him for their personal predicament. Because I don't blame him for my situation some people may assume I am supportive of him. Nothing could be further from the case I have plenty of reason to resent him for things he has done and instigated, and some of the things that he has said. A man if he is a man holds himself accountable for the things he does in this world. Charlie Manson has yet to own up to betraying the trust of everyone who took a chance on loving him, and to accept the responsibility for the lives he destroyed. I do not sympathize with Manson, nor do I support his philosophy or believe the excuses he makes for the violence he has committed.

Still I won't make excuses for Manson where Gary is concerned. Had he not charged blindly into Gary's house and slashed his face for no reason it's unlikely any further harm would have come to him.

From the moment I made the decision to go to Gary's house and take money from him everything that happened after that was my fault. Even though I had not foreseen that others would unexpectedly get involved and would do things I had no control over. The fact remains that the choice I made initially set all those other thing in motion, so that made me responsible for them as well.

The loss to the world of the gifts Gary brought to it was the worst and most tragic of course. But having to experience again and again the horror of killing him has not been a walk in the park.

Years passed before I could begin to reconcile what I done with the person I thought myself to be and years more before I could fully face myself and accept responsibility for the crime I had committed. Between one point and the other I was dishonest with myself and everyone else about what happened. Most shamefully, I implied or allowed others to infer, that Gary was complicit in the circumstances of his own death. There again was that need to find acceptance in the eyes of others that was a driving factor in how I dealt with what transpired at Gary's house.

It should be clear to you by now that both Gary and I were into some things we would have been wiser to avoid, not least of which was befriending someone as deluded and unscrupulous as Charles Manson. However it would be hypocritical and disingenuous to say that Gary was a drug dealer. The story about the drug burn was just something put into my head by others, and there are plenty of reasons to be suspicious of the story considering its source. Gary wasn't the kind of guy to burn anyone in a drug deal or otherwise. I chose to buy into the story and allowed it to be part of the internal narrative I used to justify my decision to rob him. And later to rationalize some lame reasons for what followed. I deeply regret having taken Gary's life. He did nothing to deserve it. 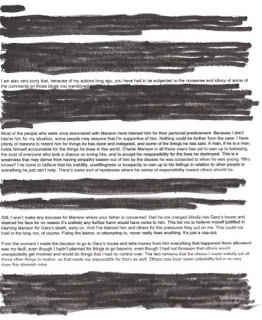 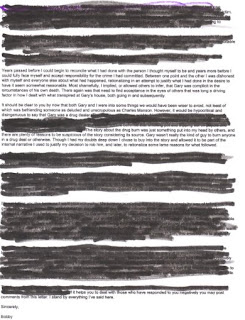