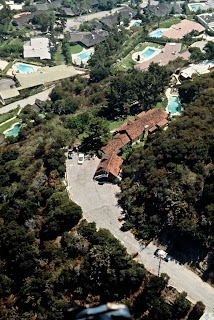 Ken Writes: "The telephone pole isn't the one that was there. It's a newer type that was put in during the 70's. I'm including an image of the gates right after the murders. As seen here, the pole was on the other side of the entrance than where the one is today."

In 1994, the old house on Cielo Drive was demolished and in its place a mansion named Villa Bella was constructed. Liz recently acquired the following photos of the construction for her readers' information. As most of used to think, the only remnant of 10050 is the telephone pole which Tex scaled to climb the fence on August 9, 1969: 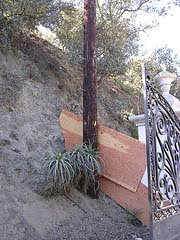 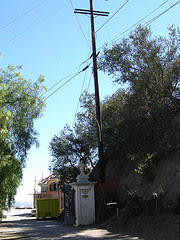 In fact, the address has been changed to 10066 to deter the less determined lookie-loos, of whom there are apparently still many.

Here is a drain that was installed on the approximate spot where Gibby's body was discovered on the front lawn: 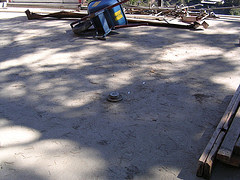 The following photos were taken from where the guest house would have stood, looking eastwards toward the main house. The swimming pool that was in between the two was replaced by an "Italian Grotto." 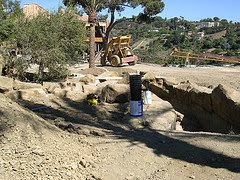 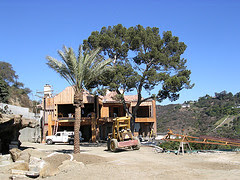 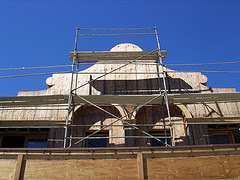 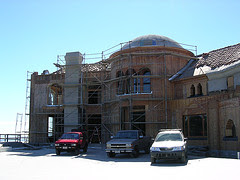 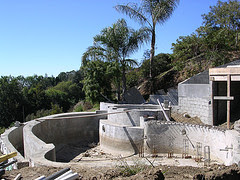 If you care to see some quick shots of the exterior and more extended footage shot inside the living room of Cielo in the early nineties, check out Nine Inch Nails' video with Marilyn Manson for "Gave Up" here: http://www.youtube.com/watch?v=yVpw1SwJRBI

Barker complete with bus on the property.
Was this the bus that had the
"America Love It Or Leave It" bumper sticker?