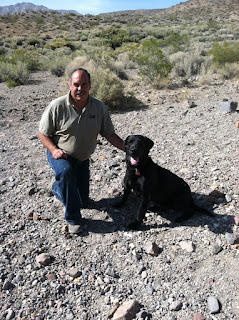 Tonight at about 5:30 P.M. I had just finished cleaning the horse pens.  Buster was waiting in front of our cabin to play with his tire that was in his mouth.  I threw the tire for him and he took off running to fetch the tire.  About 15 feet away from the tire his legs went out from under him and he collapsed on his right side.  His tongue was hanging out his mouth into the dirt and he was barley breathing.  I was petting him as an cry of anguish came out from deep inside and he died.  It was over in less than 60 seconds.  Buster died doing what he loved.

What an incredible effect that Buster has had on my life.  We have gone all over the world together and it was all because of him and his love of searching.  His alerts on Tarawa are still resulting in recoveries.

Tomorrow I will bury Buster on a hill that overlooks the ranch.  I will bury him with his blue bone and the blanket that Nancy Ekelund made for him.  The blanket and bone have traveled all over the world with Buster.

I wanted to get this Email out to you all while I am still in a state of shock and disbelief and before the grieving process overwhelms me which is starting now.

Feel free to forward to anyone I forgot.

You can read more about Buster here and here.


A NOTE FROM PAUL:

I would like to thank all of you for the kind words.  If you go to the History Flight Facebook page you can see a lot about Buster.  The first thing you see will be a hanger with rows of flag draped caskets.  There are 36 of them and they contain US Marines from the battle of Tarawa in November 1943.  One of the missing was missing Medal of Honor winner Lt. Alexander Bonnyman.  This recovery was a result of Buster alerting right on top of the trench burial that contained the Marines.

Last Tuesday Buster and I were in Las Vegas with the rest of our History Flight team making presentations at a forensic meeting.  Clay Bonnyman, grandson of Lt. Bonnyman had Emailed me that he wanted a picture of him with Buster.  This was the last photo ever taken of Buster.

Buster has around 250 documented recoveries to his credit, most of them on Tarawa.  In regards to the Barker Ranch, 100% there are bodies buried there.  My friend and colleague Dr. Arpad Vass says the same thing.  Dr. Vass is the leading authority in the world on the chemistry of Human decomposition.  He makes a very definitive statement about the bodies buried at the Barker Ranch in this video:

The Mass Spectrometer chemistry from the graves at the Barker Ranch is the same as the graves on Tarawa where human remains were recovered.

Some of you know about my friend and colleague Tom O'Neill.  Tom is one of the best investigators that I have ever met in my life.  What he has discovered is astounding and I am honored that he has shared so much with me from his incredible investigation.  Someday it will all come out.  No, I don't know when.  I can tell you it will blow you away.

There is a Vet in Bishop that Buster has seen many times in his life.  The Vet told me that he remembers sitting around the dining room table with his parents and Frank Fowles when he was younger.  He told me that Frank knew that there were bodies buried at the Barker Ranch and he was very frustrated that he could not find them.  I knew Frank when he was a defense attorney in Bishop when I was on a multiagency task force.  Frank was hard working, honest advocate for his clients and taught me a few lessons the hard way when I was on the stand.  I wish he had not passed away prior to my interest in the Manson Family in Inyo County.

Buster's first search ever was on February 24th, 2007 at the Barker Ranch.  What he found was history making, only the history has not happened yet.  In the spring of 2014 I brought a friend of mine to the Barker Ranch.  My friend had recently retired from a large law enforcement agency and had a cadaver dog.  Without saying anything more than to search some general areas, the dog alerted at the exact same locations that Buster did 7 years before.

What I do know is that two boys are buried near the ranch house just on the other side of the fence to the south.  There is a girl buried half way between the Barker and Myers Ranch.  The other sites I don't know.  I believe that the two boys is what Robert Hendrickson smelled in the spring of 1970 when he was sitting on the front porch of the Barker Ranch House.  For the record, not everyone from the family is in jail for the murders that took place at the Barker Ranch.  Some are still free.

Some of you may recall a statement attributed to Susan Atkins, “There are two boys and a girl buried eight feet deep behind the Barker Ranch”.

I did ask Manson to help me and Buster out and tell about the bodies buried at the Barker Ranch.  I will send an audio file to Matt as to what he said when he called me at home with his answer.  I will send it out in a few weeks.

My wife Jeri and I have a deep hole in our hearts from not having Buster in our lives any longer.  We will be getting a lab puppy soon and if he can do half of what Buster has done I would be very happy.

Someday, somehow, Buster will be proven right at the Barker Ranch.  I don’t know how yet.  I am honored to have been his friend and driver.  Paul