Manson and Calley, to the death

This is another Manson related article published by the Los Angeles Free Press that did not make it into the pdf that they are offering with all (so they say) the Manson articles.  This piece is an obvious satire,  a complete 180 from the first articles published in the Freep about Manson.   So much for peace, love and understanding. 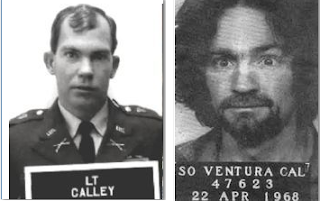 A suggestion made in jest some months ago, then spread as a rumor, finally reached the ears of the people in a position to deal with it seriously.  That suggestion is about to bear fruit.  Naturally, until the "package" is ready for publication, all names involved and the exact details must remain confidential.  We can say at this time however, that the necessary changes in local and state laws and the governor's approval are almost certain.

The linking of Lieutenant Calley and Charles Manson in a public exhibition to raise money for extremely worthwhile causes is, all agree, a stroke of genius.  Nobody involved with the extremely sensitive negotiations can recall just who thought of it first.  But here it is: Sometime just after school begins again in the fall, Charles Manson will be publically executed by Lieutenant Calley in the Los Angeles Coliseum.  The event will be carried live by closed-circuit television and satellite to millions of homes across the planet.  In addition, there will be a lottery to determine who will get parts of Charles Manson's body.  Manson's co-defendants have agreed to burn themselves to death separately during the execution.  Calley is certain that he can prolong Manson's death throughout the immolation of the girls, and if there are any others of Charlie's "family" who wish to step forward, he is sure that the timing of Manson's death can be adjusted accordingly.
If the plan is approved, it will be the first public execution in California in over a century.  It will be the first time a legal lottery has been held in California.  And last but not least the first lottery and execution carried on closed circuit television.

These are the obvious "firsts" involved, but behind the scenes, the excitement is for very different reasons.  And you guessed it, all the reasons sift down to just one: money.
Even those who were horrified when first approached for their opinions, when they were told the very real financial gains possible, changed their position.  Even those firmly opposed to capital punishment, when presented with a signed testimony by Charles Manson (not available for direct quotation at this time) to the effect that he and his Family were glad to present and example of how bravely and calmly it was possible to die, to be an example against the cowardly hypocrisy of the society that condemned him to death, while in fact, the society itself was sick and dying.  And the fact that society was willing to pay enormous sums (that could have been spent on restoring medical, welfare, etc.) to see him butchered, proved to him and his Family, how morally bankrupt the society was.

The officials most closely involved with negotiations were happy to give Manson his propaganda "victory," as they believed, and so it turned out, that the benefits to the poor, elderly, the educational establishment, etc. were going to prove to be enormous.

Examples:  With the estimated $50,000,000 gross take for tickets, TV, lottery, etc. all budget cuts to the University of California, the State Colleges, Medi-Cal, Rural Assistance, and many others will be restored.  Many more students will be able to enter colleges in California. Many elderly will get the kind of care they deserve and are entitled to.  Stalled legislative programs for re-education of out-of-work aero-space engineers will be implemented.

"Wait a minute," the wary taxpayer protests.  "Fifty million dollars is a lot of money, but not THAT much."  True, the officials admit.  But Calley-Manson, or CM is just a start.  With the necessary laws enacted, and the expected carried to and tested by the Supreme Court, CM will be only the first of semiannual or even bimonthly exhibitions.

It is expected that many variations of the basic execution will be worked out and held in different localities.  The punishment will be designed to fit the crime.  Knife murderers, such as Manson, will have pieces of their bodies cut off, little by little.  "An eye for and eye, a tooth for a tooth."  Calley, in his turn, will after full military honors, band playing and a 21-gun salute, be torn apart by four-to six year old Vietnamese orphans.  The estates of the two men will be richly endowed.  And it will be in their own interests to speak to the press at length before the executions.  Other public enemies will die by drawing and quartering, being placed on the rack, poisoning.  Naturally, not all executions will lend themselves to large public gatherings.  For less famous criminals smaller facilities will be rented.

A few indirect comments by religious, political, and social leaders might be in order:
From a priest: "Our Lord was executed publicly.  Without the crucifixion there would be no Christianity."

From a rabbi: "If the social beliefs of an act are great, the individual serves society and himself well by lending himself to it."

From a retired deputy sheriff: "This will prove a deterrent to anybody thinking about committing a crime in cold blood, and it will provide more peace officers to keep the people in line."

From the governor's office: "We're quite hopeful this will go through.  The governor has pledged himself to keeping taxes down and providing relief for homeowners.  Now, homeowners will be able to sleep better at night, pay less, and justice will be served."

From a mortician: "We will have facilities for public viewing of the remains, in a tasteful way, and in a way the will increase the public fiscal benefits of the whole idea.  I'm for it."

From a Mother: "I say let children see the results of misbehaving.  It'll teach them a good lesson.  You just can't get away from that sort of thing, immorality, and sleeping around.  Good for them, I say."

From a pacifist: "I think the state is going to reap too much glory and loot from this, but a person has a right to dispose of his life the way he wants to.  I can't say he shouldn't go this way."

From a war prisoner's wife: "Maybe this will get my husband home."

From a psychiatrist: "This is what Manson really wanted. The public convinced him he was the devil in the flesh.  He won't feel a thing as he's cut up. He knows he's supernatural and above all human laws."

From an English teacher: "All this is a poor take-off on  Jonathan Swift's 'A Modest Proposal.' "

So there it is.  The most daring break with the past ever suggested in California State history.  Who knows how far and wide the idea will spread, how much positive social good will come of it, how much legal revenue without new taxes will be generated, while at the same time Justice is served?
Now is the time for the public to be heard.  What do you think?"﻿