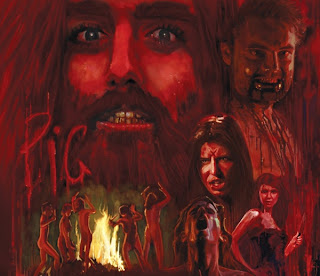 The story behind Jim Van Bebber’s The Manson Family is a pretty fascinating one. Van Bebber, an Ohio filmmaker, spent over a decade sporadically filming the movie – a low-budget, often hallucinatory look at Charles Manson and the cult he amassed during his heyday. Filming whenever he could, Van Bebber would work until he ran out of money, screen a rough cut of the film at festivals to raise more money and then go back to work. The process began somewhere around 1988 but it wasn't until 2003 that the finished film – pushed over the financial finish line thanks to David Gregory and Carl Daft – was released.

The result is a gonzo journey through fact and fiction – an acid-trip look at Manson’s influence nestled in a gleefully gory bookend about a TV journalist attempting to finish a documentary about Manson’s followers. During the decades it took to create the movie, Van Bebber, who wrote, directed, starred and self-financed the film, created a sometimes dense, often morally reprehensible and only occasionally restrained movie that really is like few other films of its kind. The Manson Family is muck-encased, blood-caked modern exploitation that transcends its financial limitations to become something really fascinating – equally for its content and for its origin.

Over the last ten years, Van Bebber has slipped into the fringes of horror – working hard for the last several years to finance his follow-up picture, Gator Green. Along the way, Van Bebber has built up his own cult of personality – acquiring rumors, whispers and legends along the way. Now, on the tenth anniversary of The Manson Family, Van Bebber is ready to step back into the spotlight in a big way. A successful Kickstarter campaign helped finance a short film version of Gator Green in the hopes that it might raise interest in the final film. In addition, The Manson Family is on the eve of a theatrical rerelease tour (including a stop at the Alamo Drafthouse Cinema – Vintage Park on Friday, March 29 and Saturday, March 30) courtesy of Severin Films. A new high-definition transfer of the film will follow when Severin Films releases a Blu-ray this April.

The below interview was done over the phone and – to put it bluntly – I’m not completely sure what was going on. Right away, Van Bebber seemed to have adopted a character, occasionally slipping into a British accent and more often than not providing a rambling, incoherent answer that ended in a desire to fight me. I'm assuming this was all for a bit of fun (I've not been able to locate any proof that Van Bebber has joined The Troggs, for example). Either way, Van Bebber has shown he still has the ability to be just as interesting and entertaining as the films he makes. If you're looking for an insightful look into the making of The Manson Family, I apologize. The good news is that the upcoming Blu-ray will include the full, uncut documentary The Van Bebber Family - a chronicle of the film's production. If you're looking for an interview that ends with the subject demanding an apology and hanging up - you, my friend, are in luck!

If you are in any of the cities the film will be playing (full line-up here), you should definitely check out the movie on the big screen. Many of the screenings will be in 35mm and include an advanced look at the short film version of Gator Green. In any case, make a point to check out The Manson Family if you have an opportunity. I can't guarantee you'll love it but - hey, a lot of parents don't love their kids, and they still spend time with them.

It's been ten years since your movie was released in its completed form. How does it feel to be about to see the film rereleased theatrically and released on Blu-ray for the first time? I imagine it’s an exciting time for you.

This is as exciting as Glenda Jackson’s nipples.

Okay, then. In the last ten years, have you noticed that The Manson Family has changed your approach to being a filmmaker?

It has made everything … purple.
Purple?

I do believe that’s what I said.

Well, other than that - do you feel you've changed as a filmmaker since this film has been released?

I have grown more accustomed to beer drinkers.

Did you say beer drinkers?

That’s what I said. What’s wrong with you, lad? You've got shit in your ears? Do you need a good tommyknocking from the Brighton Blackie Boys?

Can you talk a little bit about the lengthy production that you went through to get THE MANSON FAMILY made?

The lengthy production. Is that what you said?

That is what I said.

I just believe that, you know, no man can get hair on his balls until he’s grown.

Well, let me ask you this – do you see any current figures in today’s society that have the same charismatic influence that Charles Manson did?

No, no. No, it’s all bullshit. That’s a bunch of flying poppy. Nun. Sally Fields or whatever. Flying nun. Am I now the Flying Nun? Is that what you’re trying to say to me? I am the Flying Nun? So I’m no better, in your spit world, than Sally Field flying through a fucking poppy cock then a bunch of blue sky.

I’m going take that as a no.

That would be a no.

Over the last ten years, have you seen life reflect art - have you had any correspondence with Charles Manson or his followers due to making this movie?

No, I have no desire to talk to those shits.

It's pretty amazing that the film is both getting a theatrical release in 35mm and being rereleased on Blu-ray. Is it good to see this movie find new life in both the original film format and also a new high-definition digital format?

I find it amusing at best. You've got to understand… I would rather… Do you want to fight?

Do I want to fight?

Maybe. Are you going to be in Houston anytime soon?

No, I mean you! Do you want to fight?

Upon consideration, I’d prefer not to.

Have you had a chance to take a look at the upcoming Blu-ray and its transfer?

What is a Blu-ray?

The new high definition transfer of your film.

Really? I… Do you want to fight?

You’ll have the score of the Blackie Boys behind you, right?

How does that digest? Do you find British rock is a little rough coming out the other end?

Um, I don’t worry about the other end, per se. I take in my intake, good man.

I imagine Britain Rock is high in fiber.

Well, it charms the soul.

So, congratulations on getting the short film version of Gator Green successfully Kickstarted. When can fans expect more news about the film?

There’s no more news. (long diabolical laughter) Bother! Ba-ba-ba. I want to be a rock and roller.

Your background as a cult filmmaker should go a long way towards making that transition to being a rock and roller.

I’ve just recorded a new song with my favorite rock and roll group.

So, when is that going to get released?

Any plans to tour with the band?

Perhaps, perhaps. Actually, at the Housecore Horror Film Festival, I believe it’s in October, I will be singing “Wild Thing” with my band The Troggs.

Congratulations on this new career.

I hope that you have a new career.

I have to ask about the Kickstarter campaign. What’s the deal with Evil Dead Trap 2.

Excuse me - what did you just say?

In the Kickstarter campaign for Gator Green, you included many contributor bonus levels that awarded people copies of Evil Dead Trap 2. What made you decide to include this particular film? I didn't immediately recognize the connection between the film and your work – did you just happen to have a bunch of extra copies of the film lying around?

I am not a distributor so that is totally the wrong question for this person. I have no control over Evil Dead Trap 2! I have no idea. I have never even seen the film.

I understand that the promotional short film for Gator Green is going to be included with the theatrical re-release of The Manson Family. What can fans expect from the short film?

They can expect what I deliver – which is violence and sex and animosity and loathing in great degrees. That’s what they can expect.

But no feature film is happening, right? Just a tour with The Troggs?

So, besides your musical career, what’s next for you?

The next thing I’m going to produce is a very personal production of mine. It’s a totally naked musical version of The Music Man. And we’re all buck naked.

(At this point, Van Bebber breaks out in an unintelligible  off key rendition of what I assume was meant to be a song from the musical).

Just buck naked of course. And, you know, flaming bush right in your face.

And will this be for an audience of your cats or will you take this on the road?

Do you still shoot with film or have you moved on to digital?

I’ve read past interviews where you advise young filmmakers to always shoot film. Does your advice still hold?

Well, I want to thank you for your time and I’ll let you get back to the copious mushroom tripping I seemed to have interrupted. Good luck with the re-release of the film on Blu-ray and during its theatrical re-release.

The randy statement about mushrooms and what have you? Can we correct that?

Sure. So, I’ll assume that you are not currently high?

No, say you’re sorry for saying that. Before I get violent.

Sure, I apologize for insinuating you may not have been totally coherent for this interview.