Fountain of the World and the Family

Here's a follow up to the previous post on the Fountain of the World.  The article was written soon after the arrests of Charles Manson and the others for the Tate LaBianca murders. 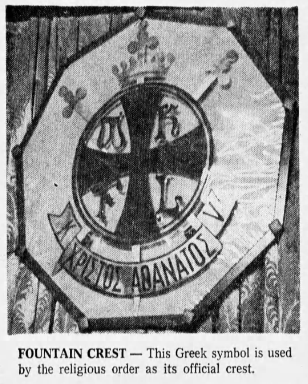 The bizarre Tate-LaBianca-Hinman murder cases took another macabre twist when it was revealed today that members of the accused “Manson Family” frequented and sometimes took refuge in a religious cult retreat with a violence scarred past.

A frightened teen-aged girl, her mother and an aging “sister”, who all live at the Fountain of the World commune in Box Canyon, confirmed information that accused murderer Charles Miller (sic) Manson and members of his hippie hate cult “several times” visited at the retreat.

Mrs. Ann Todd, her daughter, Virginia, 17, and Sister Nekona, an elder of the commune, recalled how they met Manson and his followers.

In an exclusive interview with a team of reporters and photographers from this newspaper at the Fountain it was further learned that several of the girls from the “family,” including Susan Denise Atkins, Patricia Krenwinkel and possibly Linda Kasabian and another girl, had sought sanctuary in the retreat shortly after the Tate and LaBianca murders in August.

Det. Lt. Robert Helder, key figure in the LAPD murder probes, told Hollywood Citizen News- Valley Times that investigators knew of the Manson Clan’s visits to the Fountain.  He described an “inner circle” of followers who are alleged to be the perpetrators of the thefts, auto thefts and ultimately murder, but he said the group sometimes numbered as high as 60 persons while in the Chatsworth area. 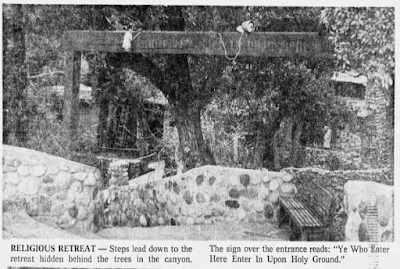 The secluded Fountain community is tucked away in a tree-shrouded roadside deep in the rocky, boulder strewn Box Canyon about eight miles from the Spahn Ranch where the hippie marauders made their home for almost a year.  The area is pretty sparsely settled.

The Fountain, which now houses 15 men, women and children, was the scene of a dynamite explosion Dec. 10, 1958, which killed “Krishna Venta,” self-proclaimed Messiah and founder of the cult, and nine of his followers.  The two cult members who assertedly detonated 40 sticks of dynamite were among those killed in the blast and fire, according to Merle Hollis, chief criminal deputy for Ventura County, who headed the investigation of the grisly event.

“Sister Nekona” and Mrs. Ann Tod described Manson and several of his followers as “friendly and polite” during their many visits.  They said on several occasions they gave them food and sometimes shelter for the girls and that they ate with the Fountain members a few times in the communal dining hall and worship area. 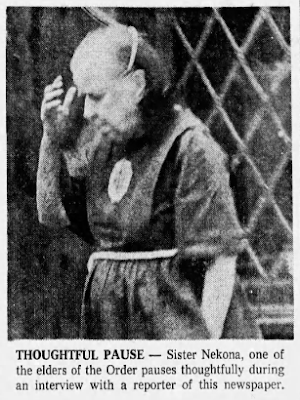 Mrs. Todd reported that on “two or three” occasions Manson and some of the girls took part in the commune’s Saturday night skits and musical shows.

“Charlie would sing and play his guitar for us and the girls would sing and harmonize.  I complimented them one time because they did sing so beautifully together,” said Mrs. Todd.

Both women say they had no reason to fear them at that time but Mrs. Todd confided that she was “very leery of them” and that since the story of the murders have come to light, she is “afraid for herself and the lives of her children.”

Her fears are based on rumors that remnants of the clan are still in the area.  Deputies and police are again combing the community for additional suspects in the mass murders.

Seventeen-year-old Virginia Todd, who has lived at the Fountain with her mother and younger sister Cornelia, 9, for eight years, was more vocal in expressing her fears of the group.

“I didn’t like him (Charles Manson) the first time I saw him.  He was always staring at me and kept asking me to come with him into his bus and hear him play the guitar.  I was really scared of him,” said the girl.  She referred to the green and white school bus in which Manson and several of the girls arrived at the retreat and lived in for a time.

On several points Mrs. Todd and her daughter disagreed.  Mrs. Todd said the bus stayed near the retreat for only “a few days” but Virginia was sure the bus was there “for a couple of months.”

Neither she nor Sister Nekona could theorize why Manson had come to the Fountain, whose members they say abhor violence and seek to embrace all religious faiths as being equal.  However, it is known Manson studied mysticism in prison and referred to himself as “Jesus” and “Satan.”  Virginia Tod said that some of the group referred to him as “Charlie the Guru” and “Heavenly Father” on several occasions.

Mrs. Todd again affirmed her opinion that despite her fears she considered the group “friendly” but with Virginia’s help she was able to recall an incident in which “Katie” (an alias used by Miss Atkins) called her and two other women “pigs.”

(The words “pig” and “piggy” figured prominently in the murders of musician Gary Hinman, who befriended Manson, the Sharon Tate slayings and the death of Leno LaBianca and his wife.  Miss Atkins is charged with the murder of Hinman.  A girl now in custody also told police that Manson directed his followers to go to the Benedict Canyon home of Miss Tate and eradicate the “pigs.”)

“I think it was in September or maybe August when it happened.  ‘Sadie’ (Miss Atkins) and three other girls came to the main hall of the Fountain and said they were going to stay here,” said Mrs. Todd.

“Sister Muriel, Sister Barbara and myself told them that they could not stay here.  And Sadie said that had ‘been told to come here’ or that ‘they had been sent here’ and they refused to leave.  We told her again that she could not stay and would have to leave the private premises,” continued Mrs. Todd.

She explained that the Fountain is a humanitarian group and that when Manson and the others first arrived in October or November 1968, they had helped them.  “They were just dirty, nasty looking people.  They looked like they needed a bath and some clean clothes and we did not mind helping them,” she said. 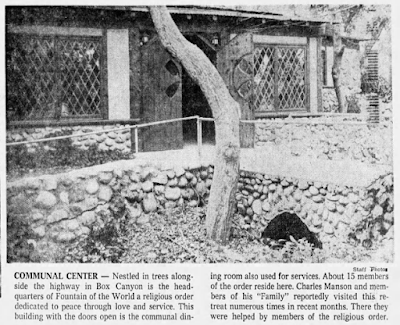 But she related at the time of the return of the four girls they had read about the arrest of most of the Manson Family at Spahn Ranch on charges of auto theft.

“We will help people but we won’t harbor criminals.  It is against our rules and against the law and we had our children to consider,” said the worried mother.

After the second refusal of the girls to leave, Mrs. Todd said one of the Fountain members went across the road to the Ventura County Fire Department station and summoned a county sheriff to the retreat.  The group went up the hill and sat in their car, according to Mrs. Todd.

“It was when Sadie was sitting in the car that she said ‘Why you pigs’ and she began to sing a song about pigs,” said Mrs. Todd.

Virginia, who was also present at the incident and says that Miss Atkins “hated me,” said she told her mother and the other women, “You’re three pigs, you’re the worst pigs I have ever seen.”  She said that the deputy ordered them to leave and they departed.

The fears of Mrs. Todd go beyond concern for the members of the Fountain and her girls to her missing son.  Hugh “Rocky” Todd, 15, has been gone since Oct. 1 and his mother fears that he may have joined with the Manson Family before they left.  His sister, Virginia, said the boy seemed to be infatuated with Katie (Miss Krenwinkel) and talked with her for long periods of time about horses and motorcycles.

Missing along with the boy were two knives which she said her brother always carried with him.  The girl said they were given to him by a man “with a long beard” who lived off and on at the Box Canyon commune.

While Manson professed to be a religious leader, Sister Nekona and Mrs. Todd said that he did not discuss the topic very much with any of their group.  Mrs. Tod remembered one instance when Manson observed her correcting one of the younger children and he assertedly told her, “Why correct a child.  A child knows what it is doing. You should let them do whatever they want to do.”

Virginia said most of the time the Family’s conversations were very confused and she felt they “were usually up on something.”   She related hearing a conversation in which Miss Atkins reportedly told another girl that “she hated killing anything, even an animal.”

Manson also made this announcement about his “philosophy.”  “Why fear anything?  Let Man do anything he wants to do or has the nerve to do.”

Both the mother and daughter said that Manson exerted a very strong influence over the group which they said also included Charles D. Watson, currently fighting extradition from Texas to face murder charges, and Paul Watkins, arrested for auto theft in the raid on Barker Ranch in Death Valley, where the clan assertedly lived following their departure from Spahn Movie Ranch in late August or early September.

“He was the Lord and Master and anything he said they did.  They never questioned him or argued with him,” said Mrs. Todd of the frail penetrating-eyed Manson, who is said to have had a hypnotic control over his followers.

They said that during the year that the clan was in the area they saw several men and women come and go.

Mrs. Todd told of a “Mary” who first arrived with Manson in the school bus and reportedly gave birth to a child on the bus.

Virginia told of a girl named Beau, whom she described as small and petite with brown hair and brown eyes.  The girl called Beau told Virginia that when she did something the group did not like they would stick long pins in her.

She told of Mary, a blond-haired attractive girl with a college education, and Stephanie, a tall girl with kinky white hair and a very bad complexion.  And also, of a woman about 30 who Virginia said was either an entertainer or “a prostitute.”

None of them recalls anyone but Manson and Watkins using last names.

Both the Todds said that they never heard any of the group mention the names Tate, Polanski, LaBianca, or Hinman but Virginia recalled one of the girls mentioning a “big rich home in Benedict Canyon.”

The Todd girl, who at one time attended Valley College, said also that she thought she recognized Terry Melcher, the son of Doris Day, as being with Manson on one occasion but she could not be absolutely sure.

Manson assertedly blamed Melcher for the failure of his songwriting career for the singing group known as the Beach Boys.  Melcher, who was visited many times by Manson, lived in the Benedict Canyon home before it was rented by Miss Tate.

Even now as the case progresses in the courts the residents of the Fountain of the World would like to forget the name Charles Manson or that they ever saw him and his band.  Mrs. Todd and her children live in fear. 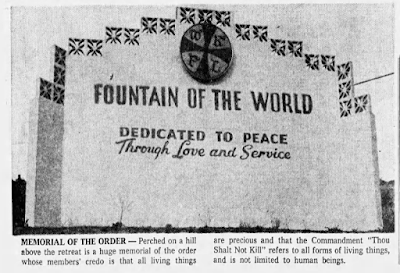