Charles Watson’s marijuana ripoff of Bernard “Lotsapoppa” Crowe on July 1, 1969 was the catalyst for the murderous events associated with Charles Manson and his “Family” in the summer of 1969.  The circumstances of this event have been recalled numerous times, but one aspect of it remains puzzling to this day, namely the contention that Bernard Crowe was somehow associated with the Black Panther Party.

According to this “Panther” scenario, Manson et al. were greatly disturbed by the possibility that Crowe was a member of the group, which had a reputation for sometimes violent behavior. And this belief served to increase “the Family’s” paranoia about blacks. (For example, a rare group of black horseback riders at Spahn’s shortly after Manson shot Crowe caused considerable concern that they might be a scouting party for some future incursion into the ranch.)

But where did this idea that Crowe was a Black Panther come from?

The logo of the Black Panther Party

The Black Panther Party (BPP) was founded in Oakland, California, on October 15, 1966. Its original goals included providing services and security to black ghetto neighborhoods, but as its ranks and revolutionary rhetoric swelled it was inevitable that excesses would occur and that it would attract too much attention from law enforcement officials. That attention led to numerous armed conflicts with The Man, ranging from Panthers brandishing firearms in and around government buildings to fatal shoot-outs with the police. “Off the pig” was a popular Panther chant, and the image the party projected was taken by many as a serious threat to society's white-oriented status quo. 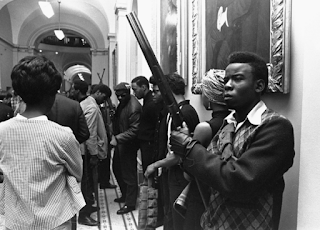 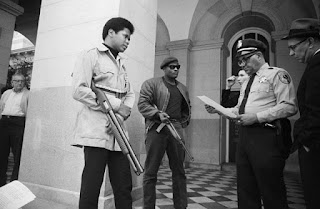 A Sacramento police lieutenant informs armed members of the Black Panther Party
that they will be allowed to keep their weapons at the capitol building as long as
they don't cause trouble or disturb the peace. 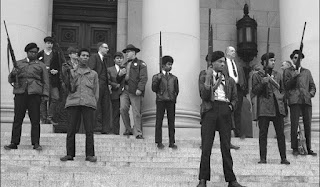 Panthers on the steps of the Washington state capitol building in Olympia on February 28, 1969

The Black Panther aspect of the Crowe incident merits mention in much of the TLB literature.  Vincent Bugliosi, in Helter Skelter (page 141, early paperback edition), has snitch Danny DeCarlo saying that the body of a Panther was disposed of in Griffith Park: “According to DeCarlo, after Tex burned the guy for $2,500 on a grass deal, the Panther had called Charlie at Spahn Ranch, threatening that if he didn’t make good he and his brothers were going to wipe out the whole ranch…. Friends of the black, who were present when the shooting occurred, had later dumped the body in Griffith Park, Danny said.”

In the 1989 updated edition of The Family  (but not in the first edition), on page 172,  Ed Sanders  quotes Charles Watson from Will You Die For Me? (paperback edition, page 123) about a dead Panther whose body had been disposed of on the Westwood campus of the University of California at Los Angeles  (UCLA):  "We all assumed Crowe had died, especially when a report came on the news that the body of a Black Panther had been dumped near UCLA the night before. This made us a little uneasy, since we hadn’t figured on getting involved with the Panthers.”  (Watson’s narrative here is sloppy. He seems to say that the Spahn’s group heard about a fatal Panther shooting ”the night before" on “the next day“ after the Crowe incident which, if accurate, would mean that there must have been considerable media reportage of a Panther shooting in the days immediately following Manson’s encounter with Crowe. It must have been a big story in order for it to filter down to the denizens of Spahn Ranch, who were supposedly famous for their lack of paying attention to the news unless they were the cause of it.)

In The Myth of Helter Skelter, page 49, Susan Atkins-Whitehouse says that Bernard Crowe himself told Manson that he was a Black Panther: “When Manson answered the phone Crowe told him he was a Black Panther (which wasn’t true) and he knew where Manson was and if Manson didn’t come down and give him his money he and all his Black Panther buddies were going to make a raid at Spahn Ranch and kill everybody there.”

Simon Wells (Coming Down Fast, page 191) seems to concur that Crowe gave Manson the impression that he was a Panther: “Lotsapoppa’s fever threats were peppered with ghetto patois, prompting Charlie to believe there might be a connection with the Black Panthers.” One page 194 Wells writes that TJ and Brenda “heard a report [on the radio] that a member of the Black Panthers had been shot the night before, and his body had been dumped at the entrance of a local hospital.”

I repeated the “they thought Crowe was a Panther” scenario in my own book (page 129), albeit with the caveat (footnote # 9) that no contemporary media reports of such a shooting had ever been brought forth.

I thought it was very unusual that no TLB researcher had yet discovered the alleged media report about a Black Panther being shot to death at the same time as the Crowe shooting. Such an occurrence, I knew, would have been very big news. How big? The fatal shooting of Alprentice “Bunchy” Carter and John J. Huggins, Jr. in Campbell Hall on the campus of the University of California Los Angeles in Westwood on January 17, 1969 was headline news all across the nation. (The pair were apparently killed as a result of a party leadership struggle.) One would expect similar press coverage if a Panther had been killed in LA in early July. 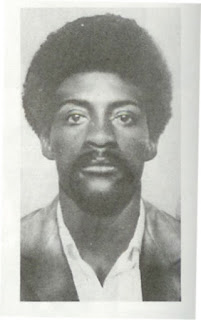 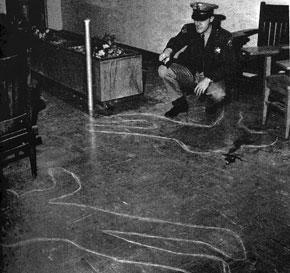 Chalk outlines mark the locations of the bodies of Bunchy Carter and John Huggins
after their murders at the UCLA campus in January of 1969.

From the front page of the Rushville (Indiana!) Republican, January 18, 1969.
This is the kind of news coverage one would expect if it was thought that a
member of the Black Panther Party had been slain. 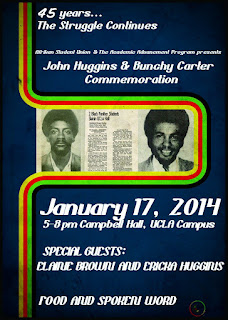 The murder of Carter and Huggins was such an important and high profile event
that it was commemorated 45 years after its occurrence. A plaque has
been installed in the classroom where the pair was slain.

I was curious about a possible source for this “dead Black Panther” scenario so I decided to look into it myself. Finding nothing on the Internet about such a shooting I went to the main branch of the public Library in downtown Los Angeles and asked to see copies of the local newspapers for the time period in question, namely July 1, 1969 and the week thereafter. I looked at every edition of both the Los Angeles Times and the Herald Examiner. Not only was there no mention of the killing of a Black Panther, there was also no mention of the killing (or wounding) of any non-Panther negro. I did, however, eventually find a general information feature article online about the Panthers that went out from United Press International and was published in area newspapers on Sunday July 6, 1969. That article referred briefly to the fatal shooting of Bunchy Carter and John Huggins (below, bottom of column three). 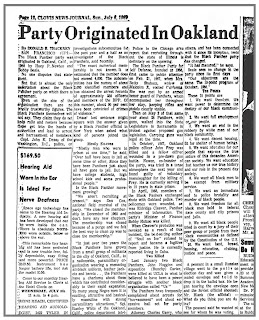 Did this feature article on the Panthers, with its brief mention of the Carter/Huggins murders at UCLA, in someone’s hurried perusal, become the media “source” for a mistaken conclusion that the shooting had occurred just a few days before its publication instead of almost six months earlier?

Did Bernard Crowe imply to Charles Manson that he was a member of the Black Panther Party? If so it would readily explain why Manson and the people at Spahn ranch concluded that he was. But if that’s the case, where did the story of the media report of a murdered Panther come from? And if Spahn Ranch was as “unplugged” as has always been alleged (i.e., no newspapers or TV), where did whoever got the story get it so quickly? How did somebody see the feature article about the Panthers (if they did) and jump to such a wrong conclusion?

Like so many other aspects of the Tate-LaBianca murders and the circumstances surrounding them, the "Black Panther" incident raises many unanswered questions. In this case, though, the answers are perhaps not all that important. Because whatever the source of whatever the rumor, the shooting of Bernard Crowe ratcheted up the pressure and paranoia level at Spahn Ranch and contributed mightily to the violence that spilled over into the Benedict Canyon and Los Feliz neighborhoods just a little over a month later.