Letter from Steve McQueen to his attorney regarding Manson Family Threats

Letter written to McQueen’s attorney, Edward “Eddie” Rubin on Le Mans / Solar Productions letterhead, by Steve McQueen, documenting his concerns about Charles Manson and his murdering crew of misfits. He, as well as, Elizabeth Taylor, Frank Sinatra, and Tom Jones (good company…) were believed, through an investigation of the murders, to be targeted for assassination by Charles Manson’s crew. 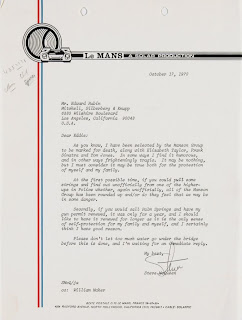