Dennis Wilson: I Live with 17 Girls 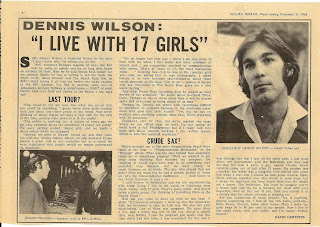 According to Wikipedia: Record Mirror was a British weekly music newspaper, published between 1954 and 1991. The paper became respected by both mainstream pop music fans and serious record collectors. It was the most progressive of the four competing music weeklies of its day, the others being Melody Maker, New Musical Express (NME) and Disc magazine.

Wow. I've never seen this before. I wonder how many other magazines Dennis talked to over in England about Charlie. I've only read the article when he calls Charlie "the Wizard" I do think it's funny how he says he's dumb. The Family Gems...do you think that was a mistake by the writer and was supposed to be Family Jams?

Who was the pregnant girl he met? Sadie? I always thought Pat Krenwinkel & Ella Jo Bailey were the 2 hitchhikers he picked up. Did Ella Jo have a baby?

I would like to see Matt demonstrate "The Inhibition" dance!!

AustinAnn74 said...
I would like to see Matt demonstrate "The Inhibition" dance!!

Perhaps on the tour, on the table at El Coyote?

Charlie is their guru...so I guess we have more confirmation that CM was the leader.

Also, sounds like he had another guy with him when he picked up the girls hitchiking...didn't know that either.

It's obvious Manson lead them being the eldest, commanding, and the one who had the direction. But calling someone a "guru" doesn't necessarily appoint someone as a leader. Did Maharishi Mahesh Yogi lead the Beatles- no. He was their guru. A man they went to for the answers and spiritual enlightenment.

I think "Guru" is said more because of the times. Mike Love got hooked with the Maharishi around then. I think he was just saying Guru, but he could have said leader.

Is this article real? I am just asking because I've never seen it referenced anywhere before.

I am sure "The Inhibition" dance is probably like the dancing the girls do in the movie MANSON and INSIDE THE MANSON GANG.

Here’s a documentary from 2008 made by the BBC on Dennis Wilson. There’s six parts total but the Manson experience begins in Part 2 at (9:06):

If only Dennis had his voice fade to a quivering and vulnerable Cocker-esque end (9:02 – 9:10) of ‘You are so beautiful’, he would have sold millions of copies of that song. Music is that precise ya know.