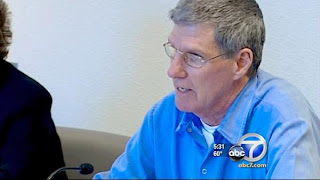 DALLAS - A federal judge in Texas says the Los Angeles Police Department should be able to obtain the decades-old taped conversations between a Manson family disciple and his attorney.

Judge Richard A. Schell ruled Sunday that Charles "Tex" Watson waived his right to attorney-client privilege when he allowed the lawyer to sell the tapes to an author.

A bankruptcy court ruled last year that the LAPD should get the tapes, but Watson appealed.
The LAPD has sought the tapes on the basis that they could provide clues to unsolved murders.
A message left for an LAPD spokesman was not immediately returned Tuesday.

Watson is serving a life sentence in California for his role in the 1969 murders of actress Sharon Tate and six others.

Great ruling. I don't have high hopes that the tapes will be as revelatory as we'd like, but I hope he's messing his drawers nonetheless.

Why would a self serving person who cares more about himself than anything in the world- tell a family friend, back when he still had high hopes of getting out someday....

a single word he didn't have to??

according to his own book he couldn't tell his parents or his lawyer the things he did do right away...

so a short time later - he starts spilling the beans about other crimes nobody else is mentioning??

This is one time I really hope I am wrong, but my guess is that these tapes are much to do about nothing...

Still would be interesting to hear Tex back in the day.

I, for one, would like to listen to these Tex tapes! I recently spent a few days listening to Al Springer's taped statements to police, half an hour at a time, and I really enjoyed his description of the fly-infested and filthy Spahn Movie Ranch and the Devil's Canyon encampment, his comments about the girls, where everyone stayed, etc. I was interested to learn that Springer only met Charlie and the girls 3 or 4 times in total, and that (he claims) his main reason to visit there was to try to get Danny DeCarlo to leave the Spahn/renounce his affiliation with Manson and rejoin his biker club group. Really interesting tapes, and I was unaware of their availability, until recently.

I think it pretty obvious that Tex would not reveal any secrets on these tapes that would be damaging to himself. He might however reveal something that could be damaging to others, namely the Family members currently imprisoned. While California can collect DNA from prisoners the law that allows for that is not retroactive and DNA can only be collected from those arrested after 2008. In order for DNA to be collected from the prisoners that were incarcerated before 2009 there needs to be grounds and compelling evidence to demand the DNA. These tapes have the potential to create the grounds to do that.


Today it's all about the DNA, it transcends any witnesses that may or may not be alive today. DNA does not suffer from faulty long ago memories. Matthew Roberts had to do a DNA comparison with a probable grandson of Charles Manson to try to determine if Charlie was his birth father. Why? Probably because Charlie would not willingly give up his DNA because then it could legally be entered into the databases. Sure, the prison personnel could grab a fork or cup that Charlie used and do a DNA test but collection by that route would not hold up in court. The same goes for any of the others currently imprisoned, Davis, Beausoleil, Van Houten and Krenwinkel.


I think the Tex tapes hold a great amount of potential and am pleased at the ruling by the Texas judge. Here is a five page pdf on the California DNA collection law.

wow sucks for Tex huh? I wonder if their is only one appeal allowed?

"But there is a 30-day appeals period before detectives can start reviewing the tapes. It's unclear whether Watson will appeal. If he does, that could delay the review even longer."

So the waiting begins again.