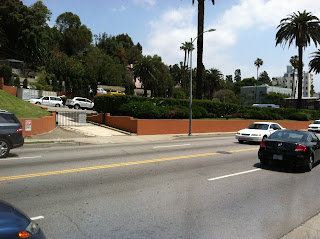 The actual spot where Crowe's apartment building stood is now the parking lot for The Magic Castle. 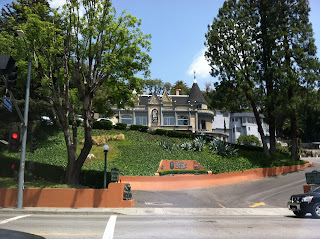 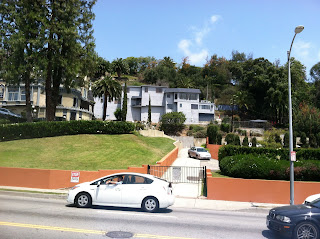 This building sits to the rear and to the right of  The Magic Castle boardering the parking lot. 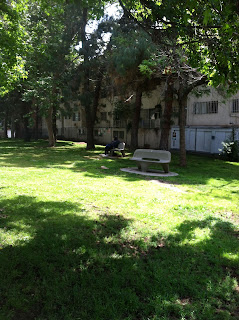 The ghost of Bernard Crowe... 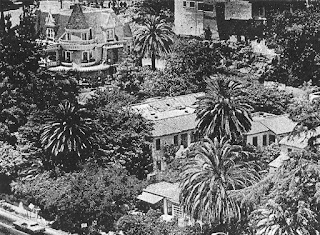 Trilby, from the comments section:

Here's an article (a link to) that has a pic of what the Franklin Garden Apts. looked like during Tex's residence at Rosina's apt. It's my understanding their apt. was 2nd floor, left side, to the rear. Rosina had an off-on roommate (sp.?) who was a cast member of a production of "Hair". I'd better not name her, because she was extremely upset when I attempted to interview her awhile back. I was referred by a friend who "dated" her during that era, I'm fairly likeable and kind - yet her reaction was actually pretty hostile and proactively defensive. I found that interesting. Recently another name and e-mail address crossed my paws, another resident of the building in that era - hopefully she'll have some info. The trouble is, alot of the people I talk to remember specific details of the 60s about as well as I remember the 80s (the beginning and end, okay... The mid-80s not at all, really.).

What is the magic castle? I have heard of it for years and I have no idea what goes on there. Awesome pics, thanks! :)

It's a restaurant / magic club. Invite only. You have to know a magician/member. I just received an invite. I've never been. You have to dress up and spend a lot of money on food and drink.

not to sound like an ingrate, but I honestly have minimal interest in where Crowe's building once was.
I am far more interested in the conversations that took place on the tour. I mean, seriously, the Col being unmasked as a great guy is huge in TLB blogger lore. Can you guys share anything on what he and the great Robert H and others discussed?
Did they, for example, discuss the Boston bombings and other events as they relate to CM's race war predictions. Things like that.

Seeing these locations, especially in their geographical relationship to one another and the story really help bring it to life. The apartment building is gone, but the vibes aren't.

Sorry leary, what happens in Vegas stays in Vegas...

damn Matt, I swear I almost wrote that...or is it a case of what happens on the tour stays on the tour.
I'm just envious of all the interaction and conversation. And anxious to see the Col's blog come alive again with his take.

I believe Tex mentioned watching people coming and going from the Magic Castle from his apartment at Franklin Gardens. Another thing that's interesting about the Tex/Kroner apartment is that it's right behind the Chinese Theatre. Also across the street from Manson's '59 apartment. I wonder if Kroner continued to live there after the shooting.

Boston bombings? Race war? What are you talking about? The only war going on is the government's war against the people.

Candy I think you misunderstood my comment. We did not consider going to see Grey Wolf and Star because it was too far out of the way. If we had considered going it would have taken up one whole day to do one thing. We tried to do as many things as possible in the little time we had in LA.

Candy, we made no such assertion. Maybe they would have met with us, maybe not. Our point is we have no preconceived notions about them and we would have been willing. However time wouldn't have allowed even if they were amenable.

sorry, no disrespect Max, but you are out to lunch with that claim.
Read the intro to Robert H's book about how rise of Islamic jihads coincides with CM's predictions of a race war.
I have always been more wary of "personal jihads" like the Boston bombing and the recent attack in London than I have with 'group jihads' simply because the personal jihad is far more indefensible.
How many personal jihads will have to take place before they spark reactions from the other side.
This IS EXACTLY what Charlie was talking about nearly fifty years ago - the black man (Islam) lashing out against the white man (Christianity).
Could it really be that the vile, despicable con man was a prophet ahead of his time?

the "far right", i.e. white majority, just marched across northern England to protest the soldier's killing.
wouldn't it just be a mind-blower if CM's predictions about race relations came to being - albiet fifty years late.
and sorry again, Max. but being from Boston I am not going to sit silently when someone claims the govt was behind the killing of innocents at the Marathon. That just doesn't fly, no way no how.

That's your problem. Keep your head buried in the sand while the REAL evildoers continue to get away with what they are doing.

You should do some investigating of your own rather than blindly believe the "official" narrative brought to you by your corporate government and media. I suppose you blindly believe Bugliosi's version of Helter Skelter?

Manson was telling people back in the '60s that the JFK assassination was an inside job brought to us by the CIA. He knew what was up. Most people in prison know more about what's going on in the "real world" than the people living in it.

And yes I know all about the Muslim's predictions that they shared with Manson.

Fear your government - not your neighbor. The biggest criminals in a society are those who control the society.

Hey Grump,
Please don't leave. I like your book reports!!!

You don't have to leave. I'm not saying another word about it. I was responding to Leary.

This case was hijacked by the same government and media back then. It was exploited and inflated for so-called political purposes. It effectively ended an era. That's why Manson was labeled "The Man Who Killed The '60s."

That's the relevance to my Leary response. I'm not here to rant anything - this isn't the place.

Leaving it at that.

What I'd most like to know is the documented date of the burn/shooting of Crowe. I've seen it both as the first week of July and the first week of August. Anybody?
Here's an article (a link to) that has a pic of what the Franklin Garden Apts. looked like during Tex's residence at Rosina's apt. It's my understanding their apt. was 2nd floor, left side, to the rear. Rosina had an off-on roommate (sp.?) who was a cast member of a production of "Hair". I'd better not name her, because she was extremely upset when I attempted to interview her awhile back. I was referred by a friend who "dated" her during that era, I'm fairly likeable and kind - yet her reaction was actually pretty hostile and proactively defensive. I found that interesting. Recently another name and e-mail address crossed my paws, another resident of the building in that era - hopefully she'll have some info. The trouble is, alot of the people I talk to remember specific details of the 60s about as well as I remember the 80s (the beginning and end, okay... The mid-80s not at all, really.).
http://bigorangelandmarks.blogspot.com/2008/10/no-192-site-of-franklin-garden.html?m=1

Yes, Trilby rocks. Never quite been able to corral her, though :(

Oh, boy, Matt... If I had a nickel for everytime I've been told I'm hard to corral... Seriously, though, thank you for being so patient and kind. I think you and the Eviliz crew are just the greatest, & I will turn in my long-overdue first assignment when you get back, if you'll still want it. I really like Grump's posts (& his awesomely handsome dog), so I won't piss him (or Leary) off now by inserting a politically-tinged comment about how much it sucks to be overwhelmed at losing everything due to serious illness and starting over again; in a society that values spending money for a senseless war(s) over providing Universal Healthcare...
And Matt, you know I'm always ready to share my names and contact info with you/the gang - I truly prefer talking to people in an organic face-to-face situation - I really dislike the phone! You do interviews and follow-thru soooo much better, buddy.

right there with ya Trilby. A triple-by pass, diabetes and cancer have rendered my world a constant uphill struggle too.
Debating extremists has never been an interest of mine. I should have kept my mouth shut but the Boston thing is a sensitive area for me.

What is an extremist, Leary?

Because your awareness is limited to the inside of a box, your knee-jerk impulse is to label someone when they talk about something that is beyond your comprehension?

That's why this country is in such bad shape - too many people just bow down like good little slaves and let their captors walk all over them. Try thinking for yourself rather than parroting a bunch of professional liars.

This could happen to you, Leary:

right behind ya Grump. I've no desire whatsoever to engage with the lunatic fringe.

Were Woodward & Bernstein part of the "lunatic fringe" Leary?

Sorry, I forgot what planet I was on. Leary's right - our "elected" officials have proven to us time and again that they never lie, aren't corrupt, and always have our best interests in mind.

What was I thinking? Thanks for clearing that up Leary.