This is some recently released film of those arrested for Lauren and James Willett's murders.  It's from San Francisco Bay Area television station, KPIX.  It's kind of cool that it is in color and you can tell exactly where the newspaper pictures came from.  There is also some footage of the exterior of the house on Flora St. 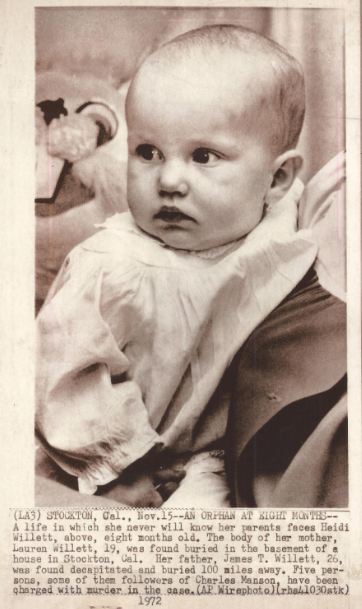 Wow, Nice find!
The only people laughing THIS time however are the Woman in front of Nancy & Squeaky & the Cop and Woman behind them!

Thank you for reminding us that the victims of The Manson Family were not all wealthy and famous. They left this beautiful baby as an orphan.

For me, this is one of the more tragic episode of The Family, and thank God they're locked up.

Nancy Pitman had to have known about the murder of, at least Lauren. The body was in the basement, and her and the others continued living in the house, playing Betty Homemaker like nothing. It's unbelievable that she is out & free enjoying her life, children, and grandchildren. Lauren and James can't.

that is some super clean footage. the stockton house has not changed much, just the buildings around it.

WOW! How do you guys do it?
Does anyone know what became of the baby? So sad. The killers are so creepy looking in this footage, holy cats!

Baby Heidi grew up with her maternal grandparents and is well as far as Mansonblog.com knows. You share her name, how about that?

Heidi S, Heidi was raised by her grandparents. She is alive, well and has commented on this blog a few times. Not lately, though...

How incredible to survive something like that. She must be one tough Heidi! :)

I have always wondered where the photos in the photo album went, which were buried in the basement of the house where Lauren Willet was buried. Did we once have some of these photos posted here? (A group sitting on the couch, a couple of candid shots with the familiar cast of characters + Lauren Willet) Does anyone remember anything about the photo album buried with other documents in the crawl space/basement?

That Cooper sure looks like a cold bitch.What karma they created for themselve.