Were Enforcer Bruce Davis and Members of The Charles Manson Family Responsible For The Zodiac Murders? 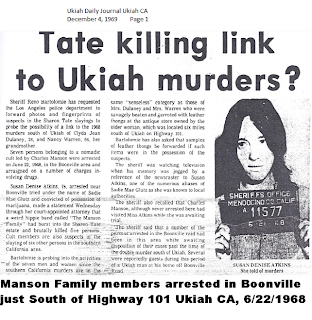 The commonality of the thong is interesting. However, thongs weren't rare during the day of the hippie. Leather boot laces were, widely available.
Has the Zodiac been connected to the Ukiah killings?

Bill Nelson was convinced that Bruce was the Zodiac killer, that tells me Bruce nor the Family had anything to do with those murders.
But after I hit the lottery Im going to dig up all of Death Valley and Goler Wash and find the Families real vicitms!!

They were definitely responsible for more murders, including the Habe girl. There is no doubt in my mind that Tex was a serial killer before he killed the TLB victims. I think all of the hardcore girls new, including that orange freckle named Squeaky Fromme, and her frizzy-haired friend Sandra Good. Oh, not to mention Miss Malibu herself, Nancy Pitman. What creeps!

I don't think Bruce was/is the Zodiac. The Zodiac was/is, first, and foremost a serial killer. Serial killer's usually work alone, and need privacy. I can't see the Zodiac living at a commune, dancing around a campfire with a bunch of hairy beaver. I picture Zodiac in his mother's basement, sharping his knives, and blinking excessivly while wearing black socks with sandals.

Research1,
Serial killers work around people have families(think BTK!),friends, and sometimes are married with children and when they 'leave' to kill most of the time those around them had no idea they were engaged in killing people!
Even friends,pastors(like BTK!) and neighbors are stunned!
Bruce would leave the group "to do his thing" as Paul Watkins wrote,and the others didn't know where he had gone for days or weeks at a time.We do know he would go from time to time to N CA,Great Britain,and other places that remained a 'mystery' to those around him.
I am told he was more feared than Tex or Charlie!
www,thezodiacmansonconnection.com