The Trial For James Willett's Murder

Michael Monfort and James Craig ultimately pleaded guilty for James Willett's murder but a jury was picked and the trial did open before a plea deal was reached.  The articles begin with Billy Goucher in June of 1973 pleading guilty to second degree murder in the death of James Willett.  Goucher agreed to the plea to reduce his charge from first degree murder and therefore do less prison time.  He also had to become a state's witness in the upcoming trial of Monfort and Craig in order for that plea to stand.

Almost six months later the trial for Monfort and Craig was ready to get underway.  Nancy Pitman and Priscilla Cooper were brought from Frontera to testify as witnesses.  There were the usual motions and protests voiced by the defense attorneys.  Along the way there were a couple of surprising twists and turns before the deal was done. 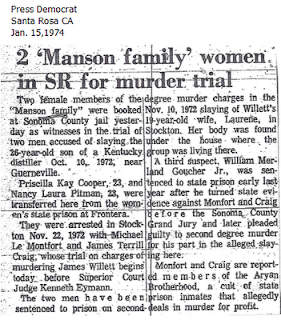 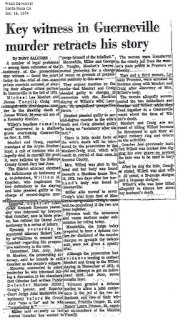 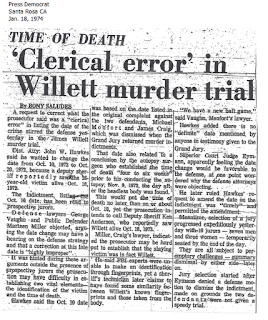 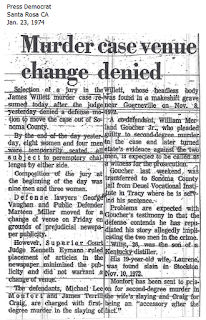 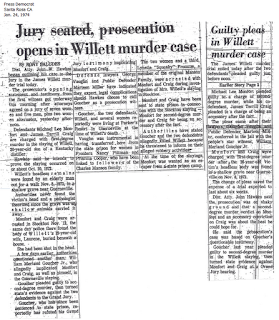 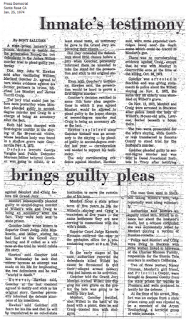 A nice epitaph to these killings in 1978
http://news.google.com/newspapers?id=3H9KAAAAIBAJ&sjid=GCMNAAAAIBAJ&pg=1813,3960344&dq=james+craig+trunk+car&hl=en

I wanted to know how these groups of people ultimately ended up also.

Priscilla ‘Tuffy’ Cooper apparently went on an armed robbery spree and was sentenced to seven years in 1980. I don’t think she got that much time for her participation in the murder of Lauren Willett. She claimed that she was depressed over the murder of her boyfriend (James Craig), and this was the reason for her actions this time. I don’t know what else she may have been involved with before she died in Nevada at a relatively young age.

At the same time I was curious about the gang responsible for the murder of Craig and Barabas. It was a group of two women and two men who were brought to trial. One of the men is currently an RSO still living in Sacramento, with the other still serving time in San Diego, presumably for those murders. The women moved north with one of them being in the news after her daughter and grandchild escaped a house fire of an unknown origin. The other woman’s son was freshly released on parole and made the papers after he was killed after being hit by a boat on the Sacramento River drifting in an inner tube.

Bad luck appears to be their constant companion.

Wasn't Priscilla sentenced to something like 5 years for the Willett incident- I thought I read that somewhere.

So Nancy and Priscilla were in the same prison that Mary,Gypsy,Sadie, Katie and Lulu were at?

I've always wondered how Nancy Pitman would react if someone stuck her with a knife and told her "I just reflected you back at yourself".......

i think nancy and pricilla where at the women's prison in chowchilla, ca. it is where atkins was sent when she got really ill.