TEX WATSON IS A PAIN IN THE ASS 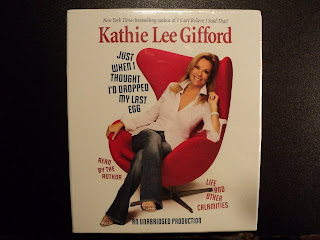 There is a lot you don’t know about Eviliz personally.  For example, Eviliz rarely talks in the third person like Panamint Patty does.  And-Eviliz digs Kathie Lee Gifford (and Panamint Patty I guess too).  Go ahead and laugh about it but keep in mind you are about to benefit from Kathie’s book titled ~
“Just When I Thought I Dropped My Last Egg.”
From the chapter titled One Degree of Separation Anxiety.

And Eviliz?  Well she still can’t stop laughing after picturing/reading the whole ordeal.

Great story, Liz! Shows you never know where your going to find something related to the Family.

I wonder if Bruce was in the audience!?!?

Liz, that Great Gatsby font is godawful. But, Patty has definitely missed the pink and lilac color scheme.

Patty once heard Kathie Lee say that she had met Tex, but she had never read Katie's entire story. Thanks, Liz!

PS Heidi, that is a beautiful dog. Is he yours?

interesting thought the sisters had - not so much that they didn't want to die, they just really didn't want to die IN THOSE DRESSES.
I know it was probably written for humor but it fits into Kathie Lee's personality too.
Just not my type.
I wonder how many times Tex spanked it thinking of her. Did you know Albert DeSalvo, the Boston Strangler, used to jerk off forty plus times a day in prison. That's what they say, but I still question if it is humanly possible.
Wait, I've gotten off track here. Kathie Lee will do that to a man.

Only her pillow knows

Thanks, Leary. Just when I thought I hadn't learned anything today...

Albert was an interesting case, Matt. There is serious doubt he was the Boston Strangler, but he was definately the "Green Man". He used to knock on women's doors and say he was with a modeling agency and offer to measure them for photos and such. For a rather ugly fella it is amazing how much nooky he got.
He also made some serious cash in prison making "choker" necklaces.
I still clearly remember the fear he caused in Boston in those days. It must have been similar in L.A. in 8/69.
By the way Matt, I hate to ask this but I may have screwed up referring to CieloDrive as "she". Is the blogger Cielo a he or she?
Maybe I should ask this in a seperate post from one about strangling. Just kidding.
I love the Cielo site, just didn't wnat to insult the person who runs it.

LOL. Cielo is of the male persuasion. One of the most knowledgeable TLBers on the planet.

i think there's an interview of kathy lee telling this story on a daytime talk show, very funny stuff. could any of you just imagine watson's face when he figured the inmates where chanting "sing helter skelter, sing helter skelter!"

Much thanks Matt, but I am not worthy of such praise. I used to think I actually knew something about all this stuff. Nowadays I don't even know what I believe. This whole case reminds me of the show LOST. You watch it looking for some answers and all you get are more questions.

But no worries Leary, I'm not easily insulted.

If he's stabby and you know it and you're not afraid to show it, SQUEEZE HIS HAND!

beauders I remember seeing that vid, too somewhere. I guess since it was daytime TV they skipped over the um ... onanazing and so on.

Matt,
Did you coin that term or is it a Catholic expression?
Orwhut :)

For those who wondered ….

Onan is a minor character in Genesis. He was the second son of Judah and died young (allegedly by Yahweh's will) on account of his wickedness.

Onan had a brother, Er. When Er died, their father Judah ordered Onan to impregnate Er’s widow, Tamar. This practice was not as immoral as it sounds and was later framed into the concept of the ‘levirate marriage’, which required a brother of a deceased male to provide his childless widow with the means to preserve the family line.

But Onan wasn’t playing the game, and when he and Tamar got down to it he pulled out prematurely and spilled his seed [read ‘semen’] on the ground. Although Genesis is unclear on this, the common interpretation is that as any issue of this conjoining would not be his own heir he wasn’t interested. Perhaps he would have had to support the sprog and his mum as well as his own family? Anyway, by breaking the law with regard to the obligations of a levirate union, he was condemned to an early death. For the whole story, read Genesis 38:3-10, preferably in the King James version.

So what does this have to do with wanking? Well, Genesis is strong on the spilling of seed, and the idea that sex should not be used for purposes other than that of procreation. Somehow the pulling out early seems to have become conflated with playing with Mrs Hand and her five daughters, although the Levitical regulations of the time would in fact have pardoned the latter with a mere ritual washing and the injunction to refrain from such temptations. The former was much more serious.

Frank, I made the word up in High School when my English teacher explained the "sin of Onan" in relation to a book we were reading. It still cracks me up...

Yes, I have referenced this before on various blogs, along the lines of "Tex Watson had an opportunity to kill KLG but didn't?...Goddam"

But like she said, he probably thought she might be better suited to help with his chances at parole. Wonder if he had Bruce turn off the lights...?

Ah yes, Frank...for thrills and chills you can always count on the Old Testament...kind of puts Helter Skelter to shame, doesn't it?

Doc,
Thanks. The masterbation part sounded unlikely to me but I wasn't sure.

It is always nice to see Starship here and-the back of his head. LOL

I would like to think that if I am ever incarcerated I would have greater self-control than that, but who knows??

I hope this has been educational for you all. I swear that I am not normally such a font of masturbatory knowledge, but I AM obsessed with Louis Theroux and that one scene in that one documentary did stick in my mind.