Manson Hopes to Pay His Way With Record Album 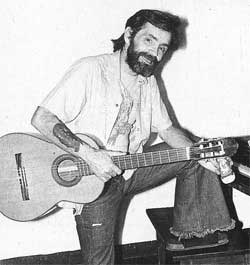 George E. Shibley, the lawyer who is handling Sirhan B. Sirhan's appeal and who has identified himself as an old friend of Manson, says the defendant is conducting negotiations with a record company.

Shibley said the negotiations are in connection with tapes Manson recorded prior to his arrest.

The attorney said the bearded, long-haired Manson learned to play the guitar while in federal prison several years ago and is considered an excellent guitarist and "an adequate vocalist." He said the album will contain a number of protest songs and numbers Manson improvised.

Manson was known as a musician in the Haight-Ashbury District of San Francisco where he lived after his release from prison, before he and his followers known as "The Manson Family" moved to Southern California.

Susan Atkins, a defendant turned informer on the Tate killings last August and the slayings two days later of Leno LaBianca and his wife, has indicated Manson bore a grudge against Terry Melcher, son of Doris Day. The grudge came about, Miss Atkins said, when the young producer was not interested in recording Manson's songs.

Miss Atkins, 21, claimed Melcher's home became a "symbol of rejection" to Manson and he later sent his followers to the Benedict Canyon house, by that time occupied by Miss Tate.

Does anyone know what protest songs the article referred to?

Glad he did not rely on record sales. The album stunk, just like the people singing on it. The Family Jams is even a little better than the LIE album.

AustinAnn,
Is it the Lie album they're talking about?

I think it only sold a hundred copies or so, he was probably pretty disappointed... would have been better off funding his defence through dope sales. Or pimping out the girls from within jail.

His music certainly wasn't genius, but I do like some of it (although I think Family James wasn't actually Manson singing/playing?):

I mean, these wouldn't win any awards, but they're kinda nice, Ride Away especially. I wouldn't listen to Mechanical Man if you were hung over or stressed out, but as it's the auditory equivalent of a DXM trip it has its own certain appeal!

If I ever become a travelling folk singer, tho, pretty sure I will call myself Family James.