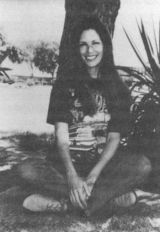 One not-very-discussed fact about Leslie Van Houten is that in 1978 while awaiting re-trial, she was free on bond.

During the original trial Van Houten's attorney, Ronald Hughes went missing in late November of 1970 while taking a break at Sespe Hot Springs. He later turned up dead. The Manson Family brashly took credit for this as the beginning of the "retaliation murders". It is far more likely (and agreed upon by TLB Scholars) that he died tragically in a flash flood.

She therefore won a retrial in 1977 on the grounds of ineffective representation by counsel. Her second trial ended in a hung jury. She was then granted a third trial.

A fact that is rarely brought up is that Leslie was granted bail for her third trial. That bail was $200K. She was free for around six months or so. During that time she worked as a legal secretary while she prepared for court and lived with an old friend.

While out on bail in 1978 she attended the Oscars with a friend... and wasn't recognized. John Waters wrote about her experience that night:

"But what did you talk about to the people you met that night?" I wondered, knowing she had been released from death row not that long before, not exactly a center of industry screenings or "For Your Consideration" Oscar campaigns. "If someone brought up one of the nominees," she shrugged, "I'd just say 'No, I missed that one' or 'I was away when that was playing.'"

Interesting to think she was granted a new trial because of a missing lawyer....

when she tried to fire him a couple times and not one of them listened to one word an attorney said in the first place..

I guess had a few of them had a few years cooling off period before the trial they might have wised up too...

She attended the Oscars? What in the F*CK??? That is one of the sickest things I have ever heard out of this whole thing. One of the Manson murderers at the Oscars. What next?

Does her lawyer ever bring up the fact at her parole hearings that she was out for half a year in 1978 and held a job and wasn't slashing people up. Didn't the family have a so called hit list of celebrities. Well she was at the Oscars and some from the list may have been there.

she was at the Oscars and some from the list may have been there.

Goes to show what a different world it was in 78. Now she would have been confined to home with an ankle bracelet (if she were allowed to bail at all).

I find this tidbit fascinating. The judge was nearly apologetic when he sentenced her back to prison.

I found a bit a case law which may give another beam of perspective about crime and punishment in the Golden State. Like most tales from the files of death penalty cases, one must truly wonder why anyone would feel the need to embellish anything since truth is stranger than fiction.

This story is as Spartan and short in lifespan, as The Family’s story is mercilessly long, complex, and the most fertile of grounds for future mythology, added for reasons which I’ll never understand.

This is about Randall Ray Houseman (Remember, three names = murderer) and Gary Dale Hines (presently on Death Row). These two individuals had a mutual acquaintance that owned a hot pink, Model T, Ford automobile which Hines coveted. So the twenty year old Hines and sixteen year old Houseman hatched a plan to steal the blaze pink vehicle, and parade about town being cool. So it’s off to the Roberts’ (owners of the car) home to get the car by killing the mother and daughter occupants, then ransacking the place and stealing some guns along with the hot pink car which the pair drive about town, and which several people take note of.

The duo end up at a friend’s home where they ask for some blankets and sheets to cover the electric pink hot rod, and as any of us would do, the friend agreed without protest and supplied a quilt and some plywood.

By now the news stations in Sacramento were reporting the double homicide of the women who were bound, gagged, and shot four times each in their home, which was absent a Day-Glo pink, 1923 Ford Model T. Well set your faces to stunned, because a neighbor noticed the neon pink car under the covers and called the cops, who arrested Houseman and Hines less than a day after their crime spree began which included a beefcake, promenade in a sweet little pink car. Wow, I’m so surprised.

So Hines gets the death penalty and presently sits in SQP. Houseman, the misunderstood and confused sixteen year old, was sentenced to 52 years to life with the drop of a gavel. But what does that mean?

Houseman got an indeterminate sentence which is a minimum of 52 years to life, so he will be eligible for his first parole hearing after serving 52 years, when he will be 68 years old. Houseman who just went along for the ride, for one day, and didn’t kill anyone, won’t have his first parole hearing till the age of 68. Where Leslie Van Houten will have her next and 21st (not first) parole hearing, at the age of 68, isn’t that something? Is it fair? Where are the cries of outrage for Houseman, who was just a little boy, and didn’t even kill a dead person, and won’t get considered for parole till he is 68?

But that’s the hard, cold, and verifiable facts, as I understand them:

So why all the butthurt regarding Leslie? I would assume (yep, I’m assuming) it is the product of a very narrow and shallow horizon, which results from the limited study of crime, due to Manson’s notoriety. Isn’t that ironic? The very people who think Manson people will stay in the slammer, because of their association with Manson, are only known to people who think there is some illusive injustice, because they were/are drawn to the Manson notoriety. Where the quickest of comparisons to other capital crimes would indicate a string of good fortune has followed them. Death commuted to life, second and third trials, marriages with private visits so this prime breeding stock can continue their DNA sequence. Houseman gets none of that. Well he may get some forced man-love since he’s in prison for stealing a pink car, but I don’t want to speculate.

What’s the base line for fair and equal treatment here? I feel that the likes of Houseman and Hines are right where they belong, and marvel at how many people were not charged as accomplices during their crime. But I’m an amateur student of the law and history, and certainly not a master. I was foolish enough to think what David Cash Jr. did to Sherrice Iverson, would have guaranteed (GUARANTEED) him a life sentence, but I fumbled because he’s innocent, and was never charged with anything, and walks among us today. So life’s fair.

She should have made a run for the border....hindsight 20/20 of course,she was stunning,she could've sweet talked some dude into it.

Some people think she will get out, will Rose Mary and Leno LaBianca ever get out of their grave ?

She should remain in prison for the rest of her life.

Leslie didn't grow up a violent person and she was known to take care of the children on Spahn Ranch. For over 40 years Leslie has been a positive influence on other troubled girls in prison.

You can tell by watching interviews of Leslie that even when people bait her and try to make her angry she has kept her composure and responded kindly. She's been in prison for 50 years in a place where people want to make you lose your temper, but she hasn't committed an infraction. It's impossible to fake for 50 years.

Lots of people don't change, but there are exceptions. I'm not comparing Leslie to the Apostle Paul, but note he was a murderer and he was fierce for a while, yet when he realized he was wrong he made changes. God forgave him and he went on to write 14 books of the Bible.

Lots of people don't change, but there are exceptions and the fact that about 20 psychiatrists have cleared her and she's been recommended for Parole 4 times, this is not a fluke. People that analyze criminals for a living have said she is "not a threat to society" No one should think they know better than all the professionals or ignore that Leslie has spent a half-century becoming a dependable person. Others have been freed after a few years and have killed. Leslie stabbed someone that was already dead - yes, a horrible thing, but she's not that person any longer.

I had read before that Leslie attended the Oscars in 1978. Do you know who did not attend the Oscars in 1978? Sharon Tate. She didn't attend because she was 9 years dead at the hands of the Manson family. I know woke with not a thing back in 1978, but the lack of self-awareness and self-accountability this woman must have had to attend the damn Oscars while on parole after her so-called family had murdered a prominent actress is just almost hard to believe. She shows about as much remorse as she has to show to get by the parole board. I doubt very seriously she was a damn bit remorseful at the Oscars in 1978. I am appalled that she got to that. I think of all the family members particularly those who took place in the murders, she is the one I just like most. Governor Newsom stated in 2019 when he denied her parole that she had yet to adequately explain how a upper-middle-class prom princess ends up living in a cult committing murder. Don't even bother telling me that Rosemary labianca may have been dead already cuz I don't want to hear that b*******. Leslie Van Houten did not need to join Charles Manson and his family. Unlike many of the girls in the family she did not suffer from family abuse she did not suffer from a lack of education and she did not suffer from mental health issues. He was a highly functioning, well-educated and athletic upper-middle-class teen who made her own choices. My parents divorced about two minutes after they dropped me off at college. And the 18 years I lived with them my sister and I enjoy word their horrible marriage. The. When my fault and the Furious when they didn't speak at all and worse yet too times when they actually made up and became sickeningly lovey-dovey. It was a horrible marriage to grow up in, but neither my sister nor I turn to drugs, joined a cult or killed people. This woman made her own choices, and she needs to suffer the consequences. It is good that she is doing so well in prison, but prison is not just about Rehabilitation it's also about punishment. I have listened to every interview and read every interview and any information I can get on her, and I think she is without remorse. The last thing I want to see is this woman out of prison living a life of notoriety where she indirectly actually price and benefit from her time in the family and her crime. I saw one interview where she actually laughed about the X on her forehead. This woman does not get it and for some reason there is a segment of the population that is totally drawn to her. I do not want her out of prison living a life of luxury while the victims of this families crime are still damn dead.