Update! The House At The End Of The Drive 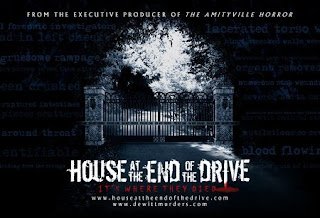 The Anniversary of the Manson Murders August 9th.


Ghost stories…  We’ve heard them for decades and they’re a dime a dozen in Hollywood where every mansion and storefront has a link to a restless spirit.   But can a thirty-six year old murder haunt four people enough to rip open a doorway to the past and catapult them back in time to a horrible night of ritual slaughter?  It can if they live two doors down from the House at the End of the Drive.
In part based on the actual experiences of its producer who lives near the site of the original Sharon Tate murder house of 1969, House at the End of the Drive is a terrifying horror thriller about a group of people who live near a famous murder site and via a time vortex, are then transported back to the night of the original killings.  The twist: they materialize as the soon-to-be victims of the massacre.

To Read More Click On The Link You Dink~

Looking at the tally for the money raised to do the Sneak Peak, they have a long way to go to reach their goal!

A movie like that should have a few good ooo-eeeeee-ooos.

Does he read this board?

We should have knocked that door while we were up there.

Lady woulda hit us with her broom

I dunno. This looks like a pretty stupid movie. Almost ten years after filming and they are begging for money just to get it into one theater? Pretty lame