MansonBlog.com had the distinct pleasure of spending a day with John Aes-Nihil. John directed (among others) a film called "Manson Family Movies (1984)". If you haven't seen it, you should.

Aes-Nihil is an archivist, collector and broker of all things Manson (among many other subjects). His Manson archives alone covers 3 buildings, so we only scratched the surface of this magnificent  collection. Today we present you with a small taste of what we saw. If you are looking for a particular item you can contact him through his website.

One thing that caught our eye was a collection of paintings. If you peruse Facebook (for example) you can find some pretty good artists who use the Family as their subject matter. Back in the day, there was an artist by the name of Caesar Lindhersch who was pretty damned good. Here are a few examples: 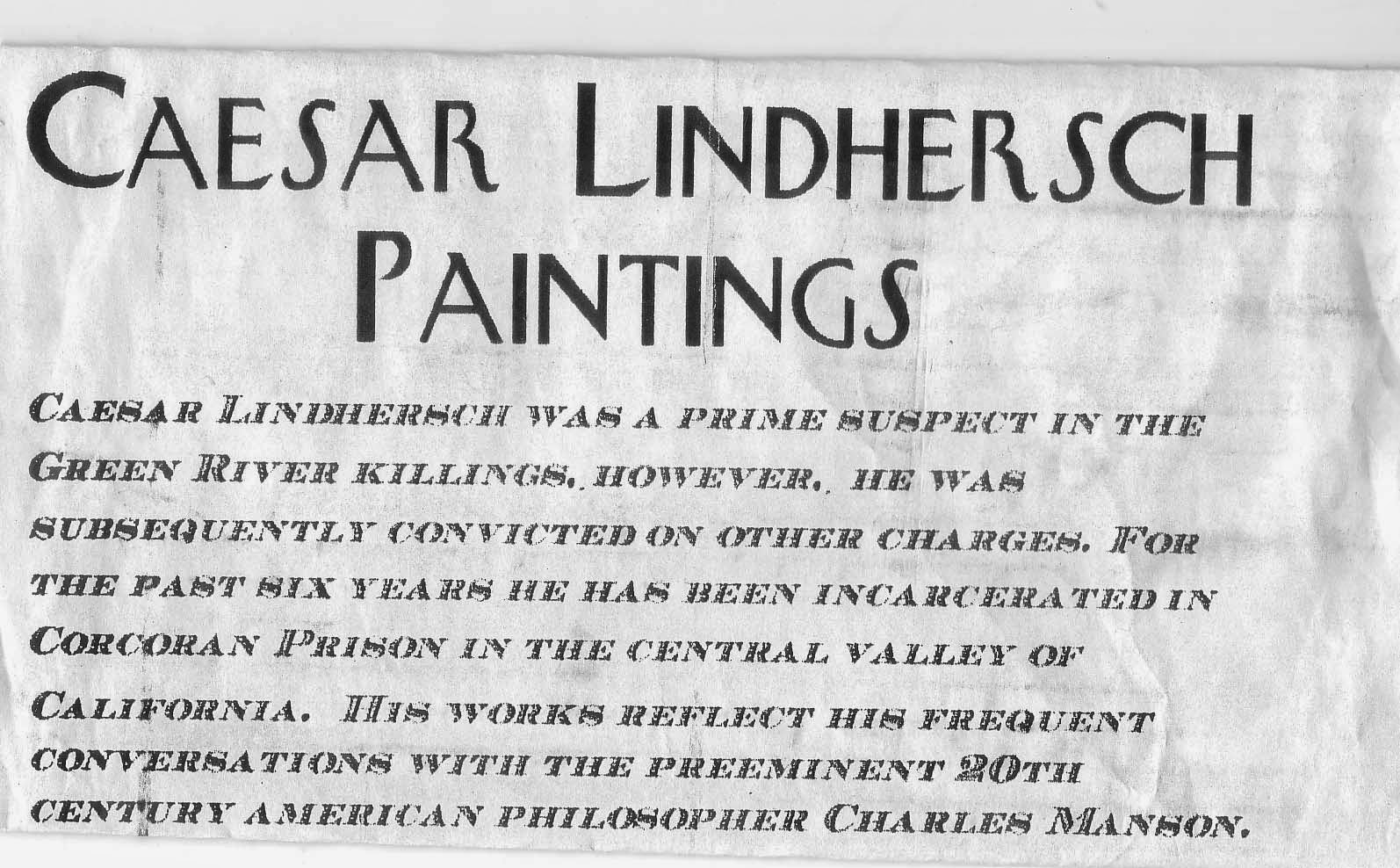 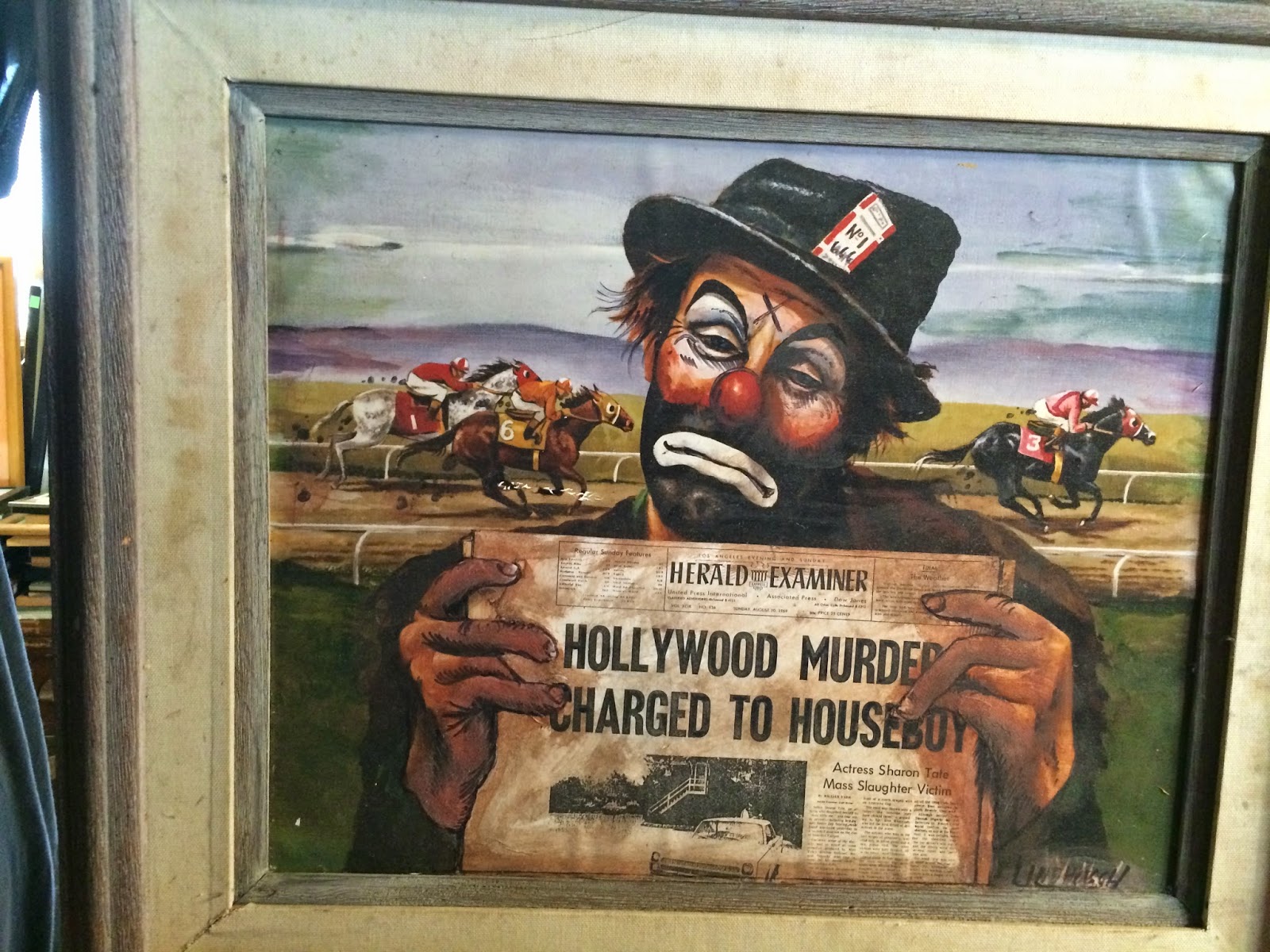 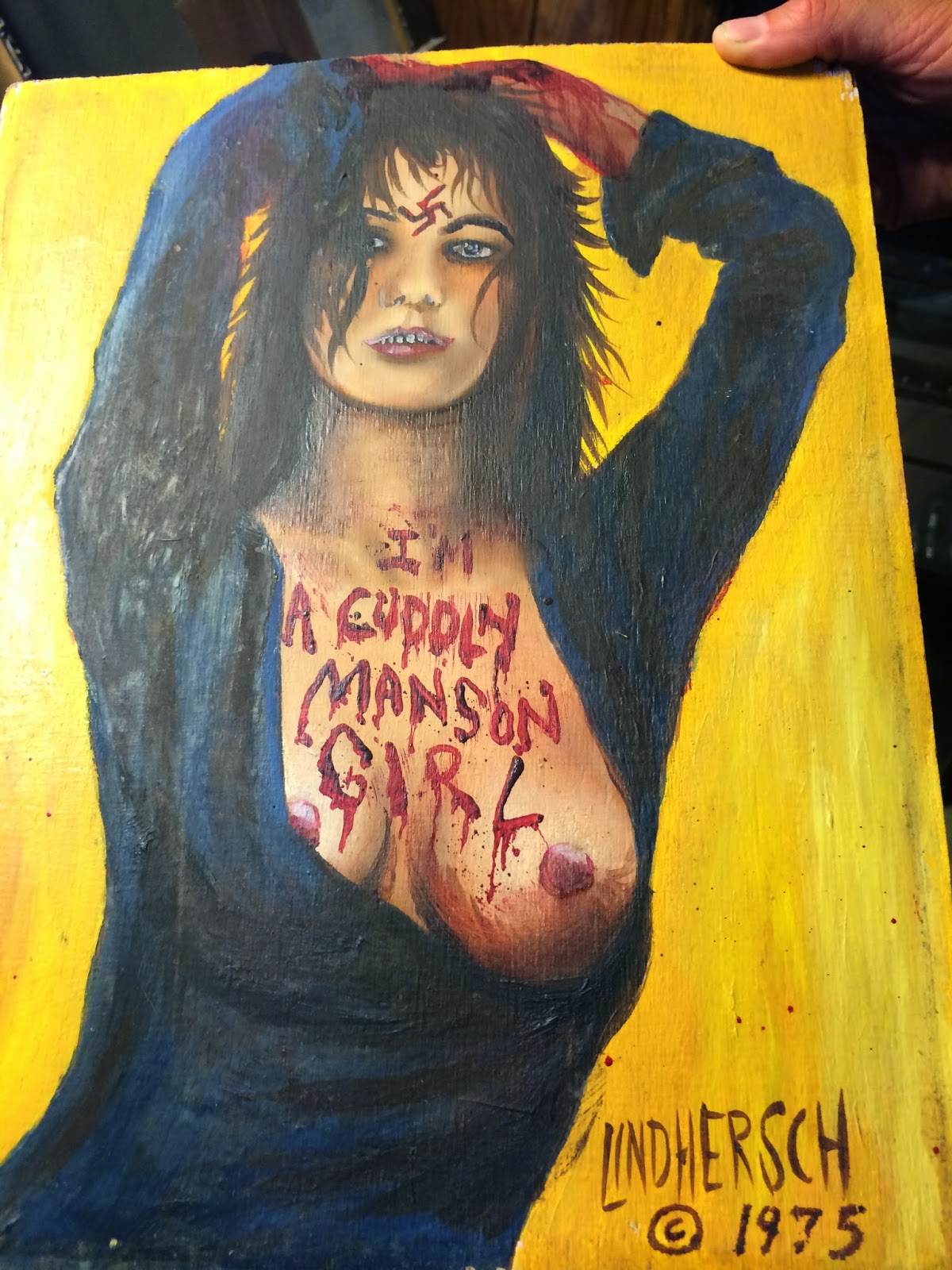 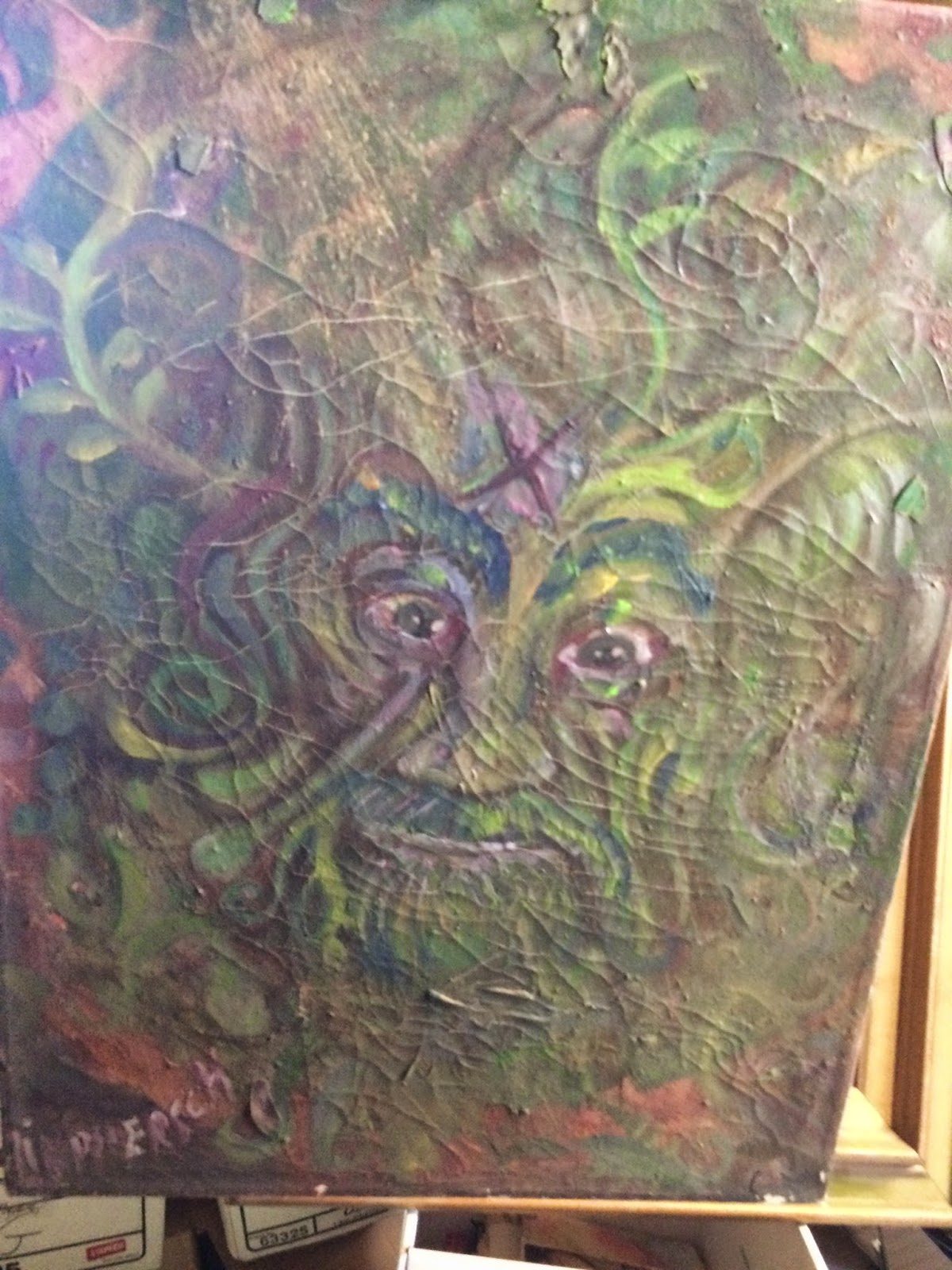 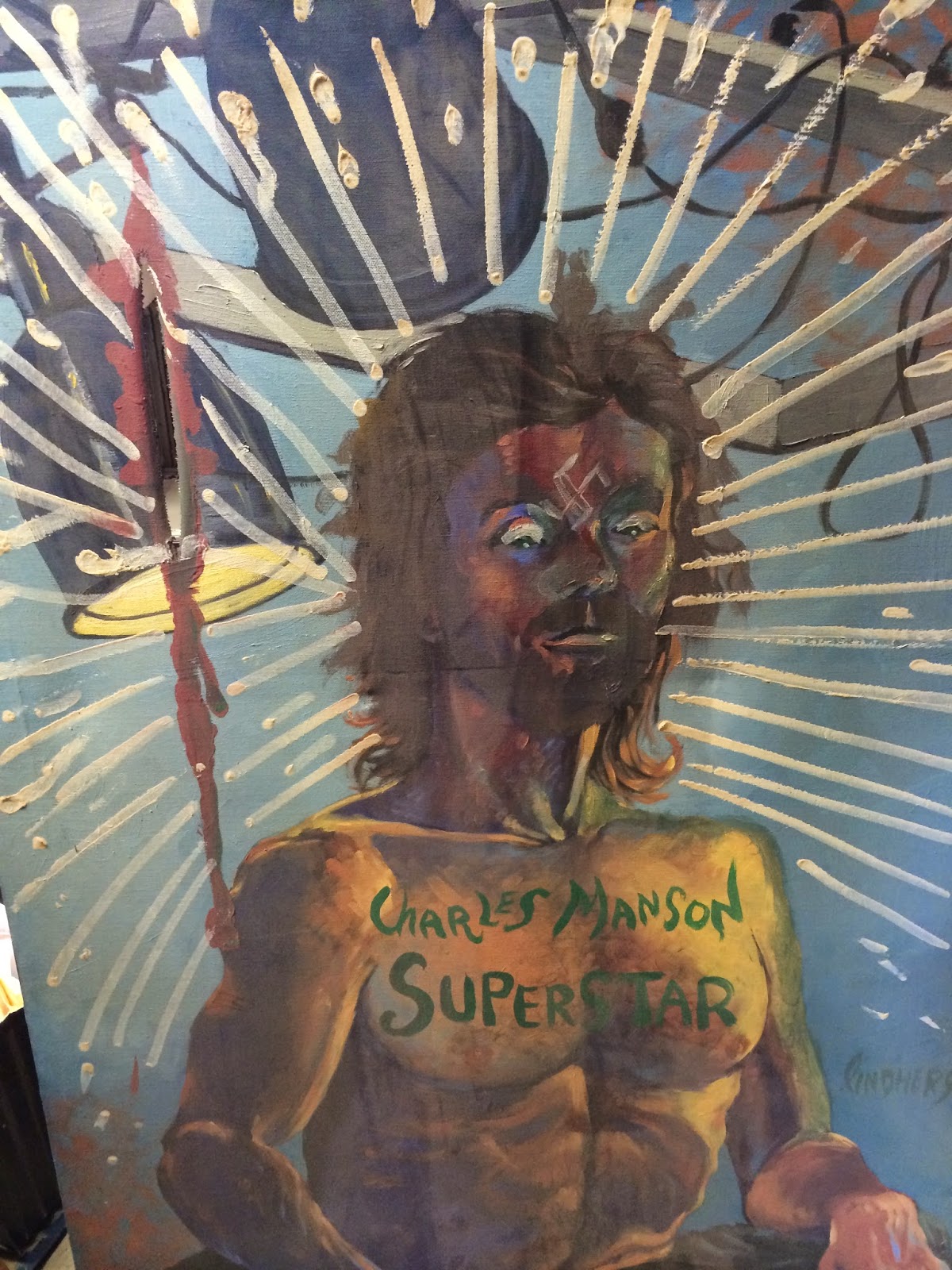 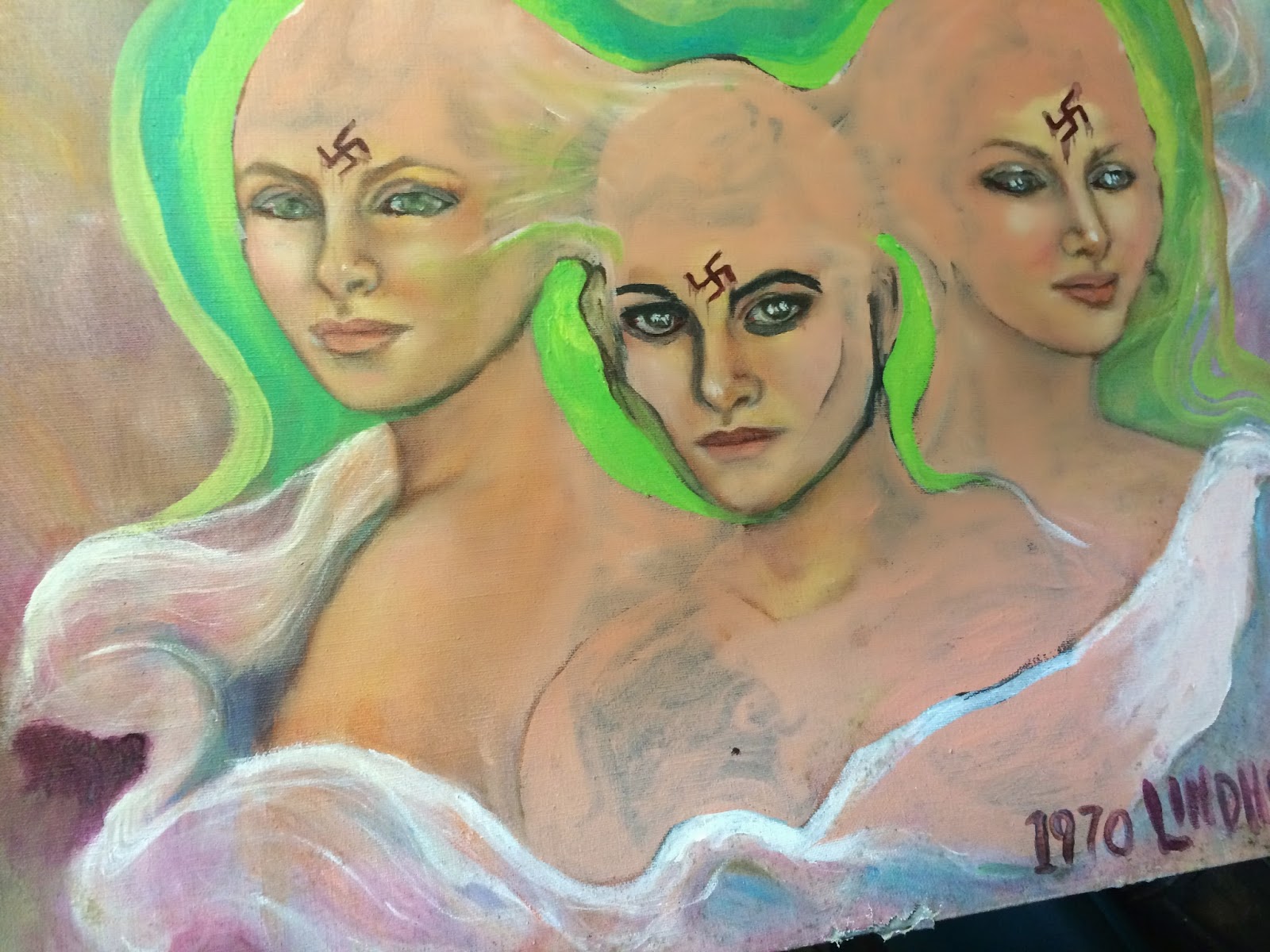 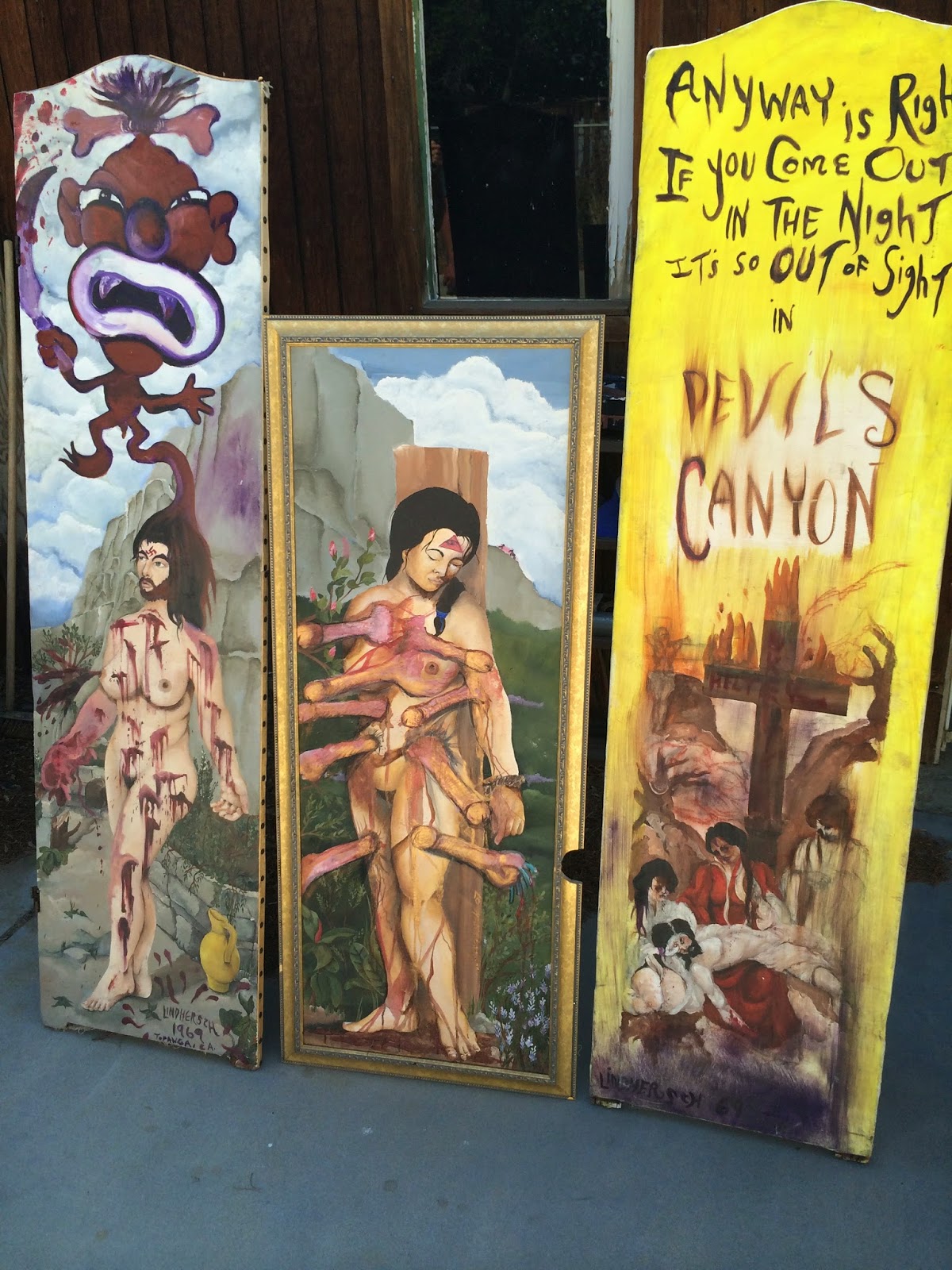 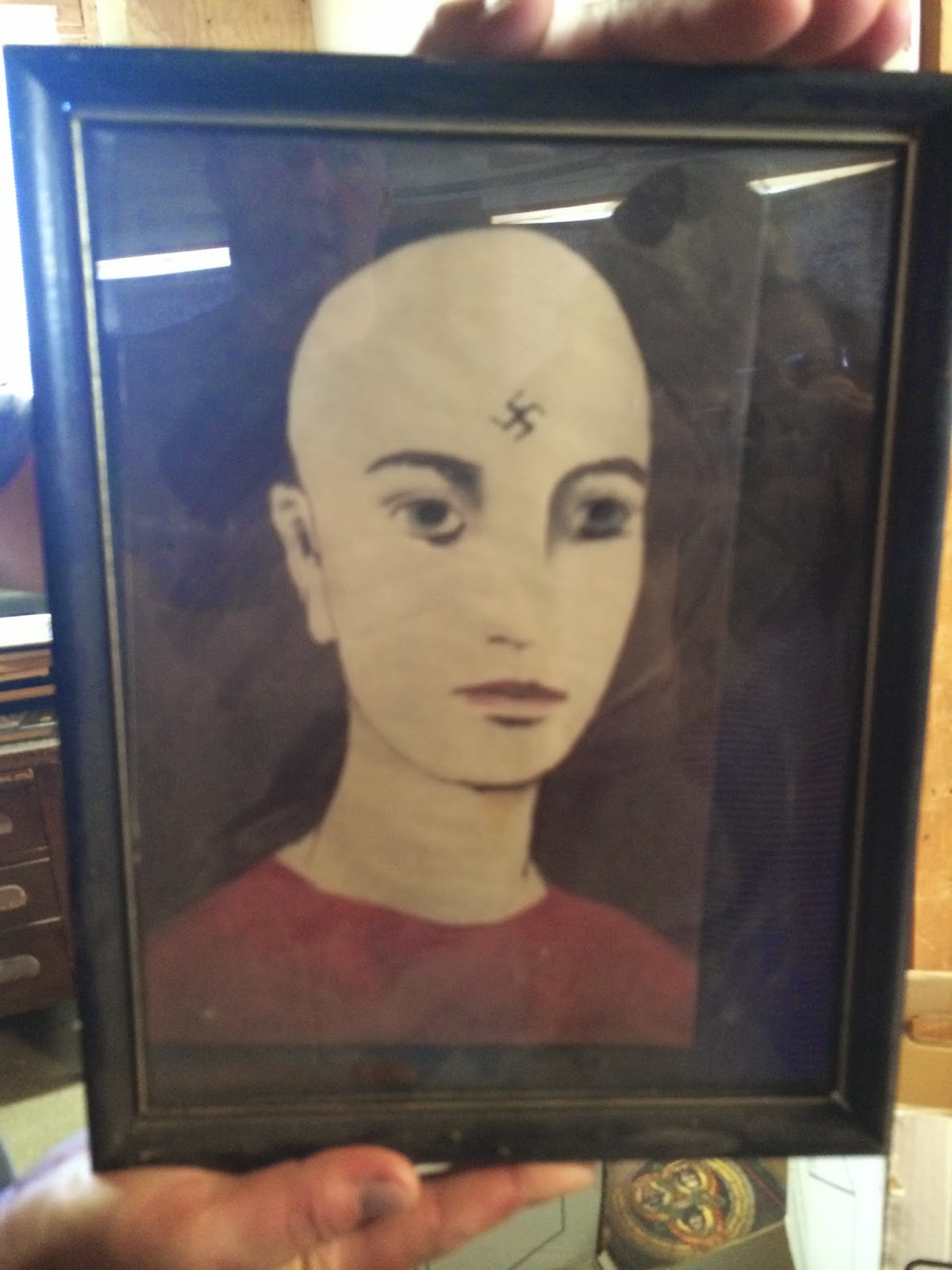 While we're on the subject of art,  DebS was delighted to see a print from a wood cutting that friend Robert Taylor did many years ago.  It is a self portrait.  Robert has a long history with the counter/alternative culture dating back to his involvement with The Process in Chicago in the mid '60's and then and his association with Robert DePugh's Minutemen in the late '60's, early '70's.  Robert, who is a writer and a musician has authored a thing or two that you may have read when researching things on the periphery of the Manson saga.  He writes under the name R N Taylor .  His folk noir genre band is named "Changes". 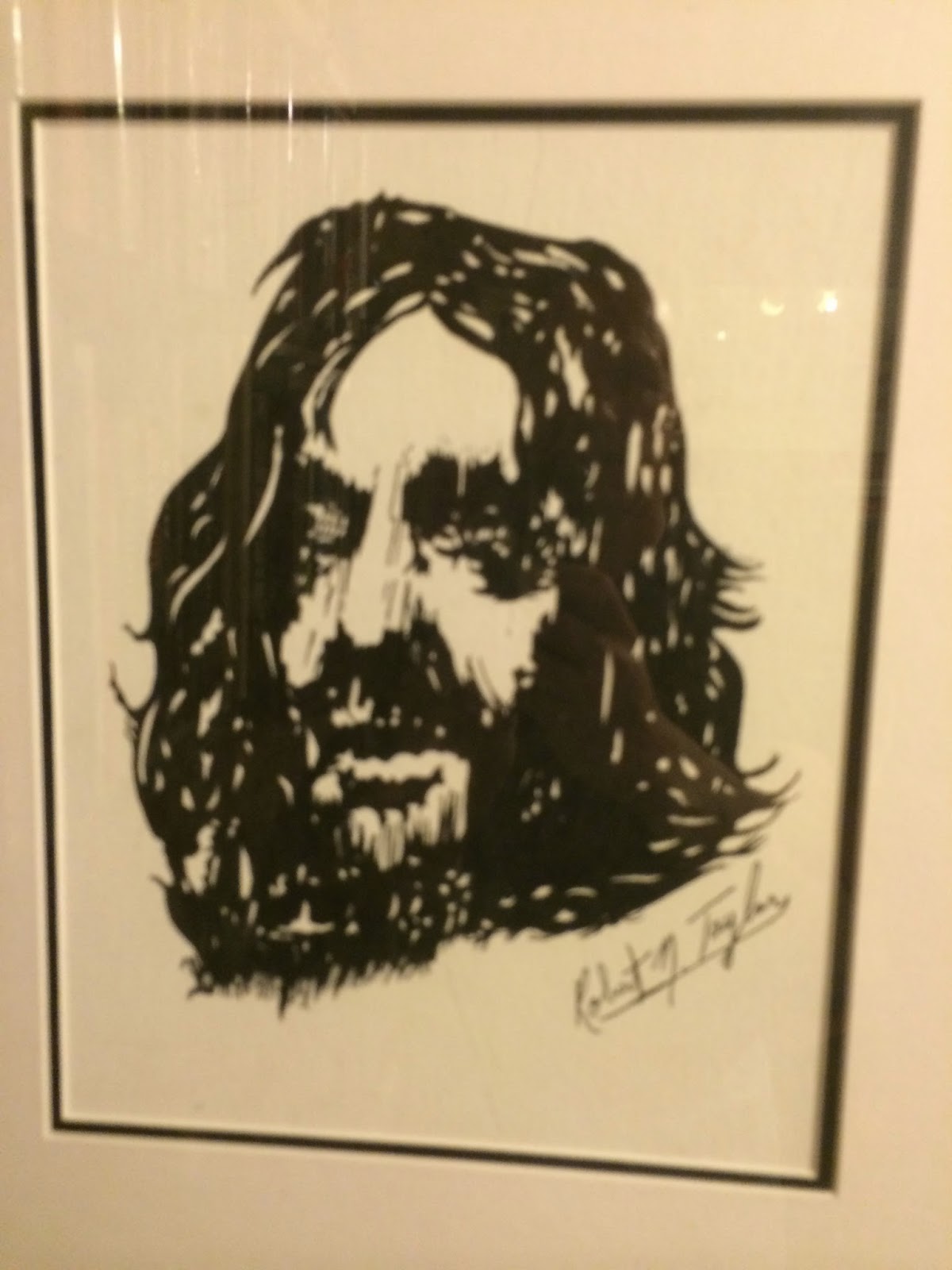 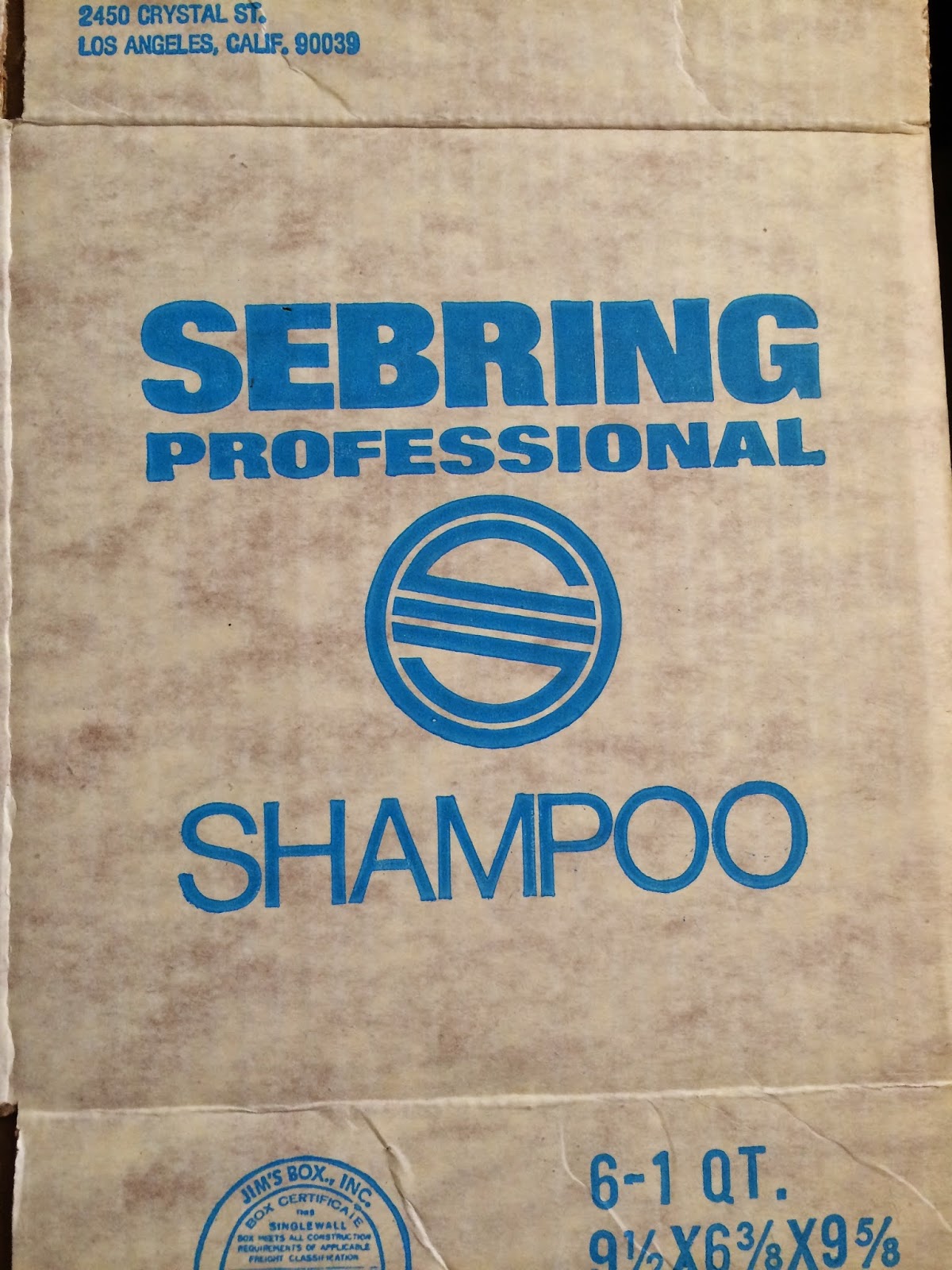 Here's something that caught our eye pretty quickly. An original 16mm reel of Robert Hendrickson footage from his time embedded with the Manson Family at Spahn Ranch: 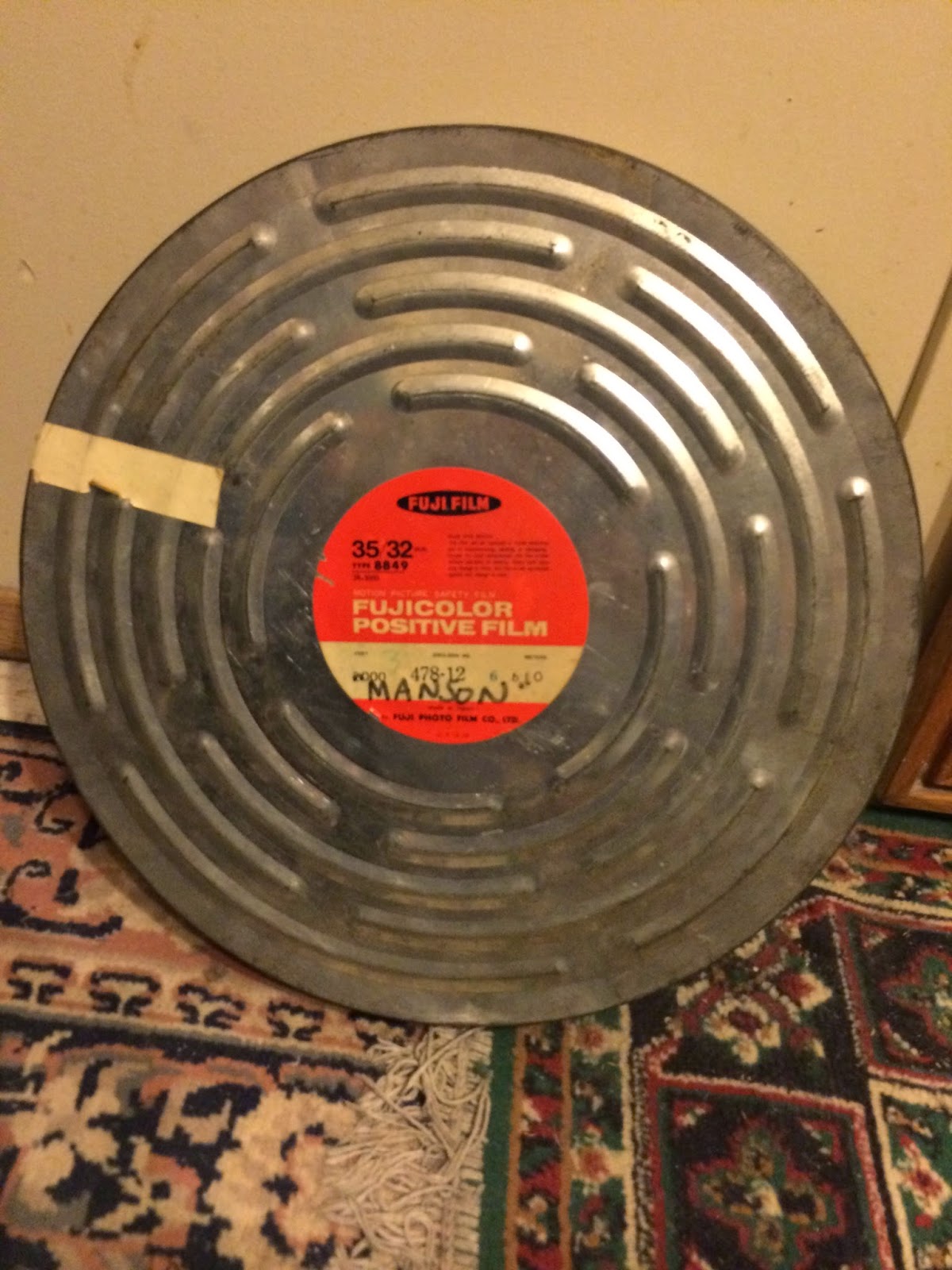 If you'd like to own this photo of Bobby Beausoleil, John has it in mint condition in the original magazine: 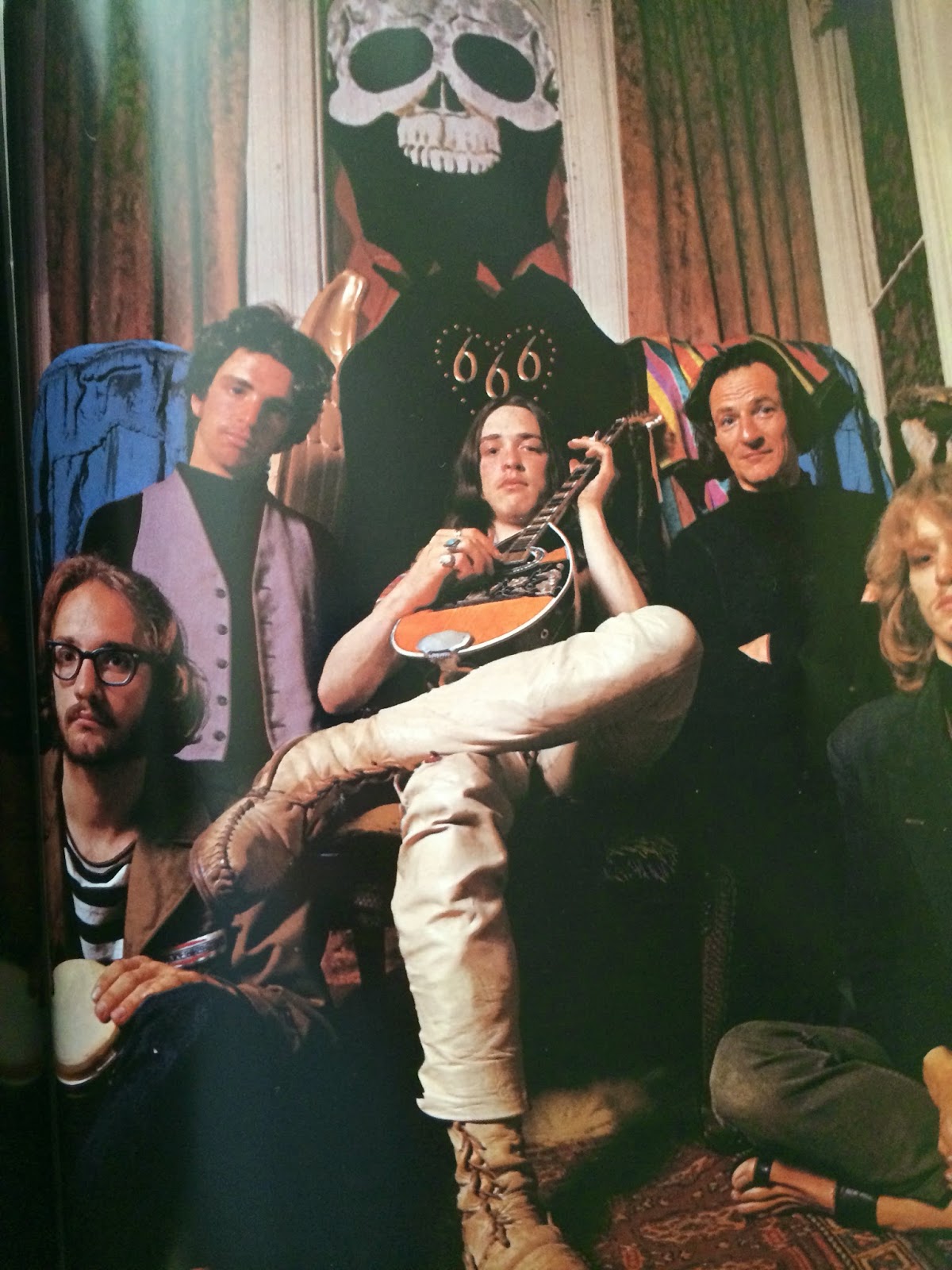 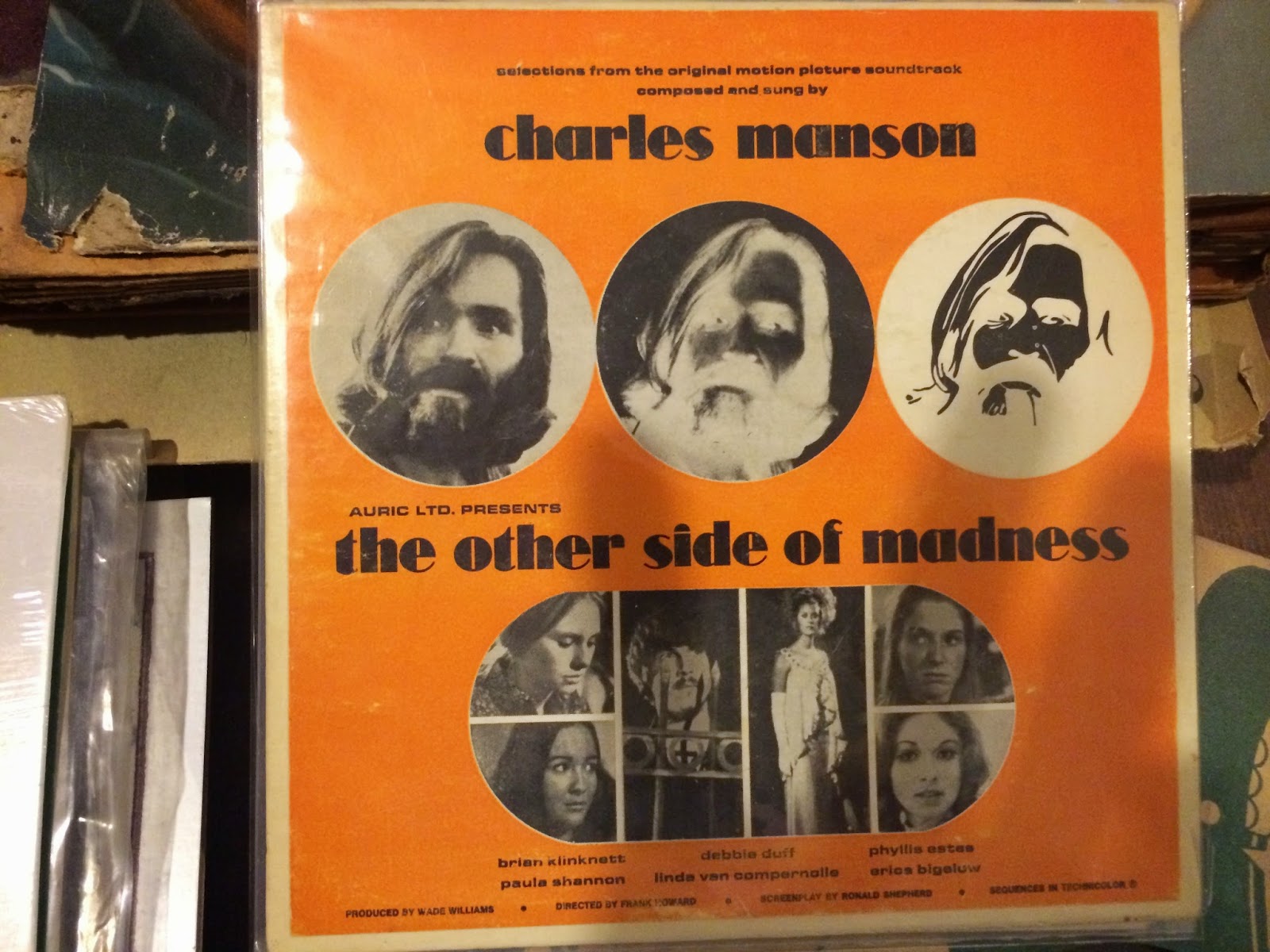 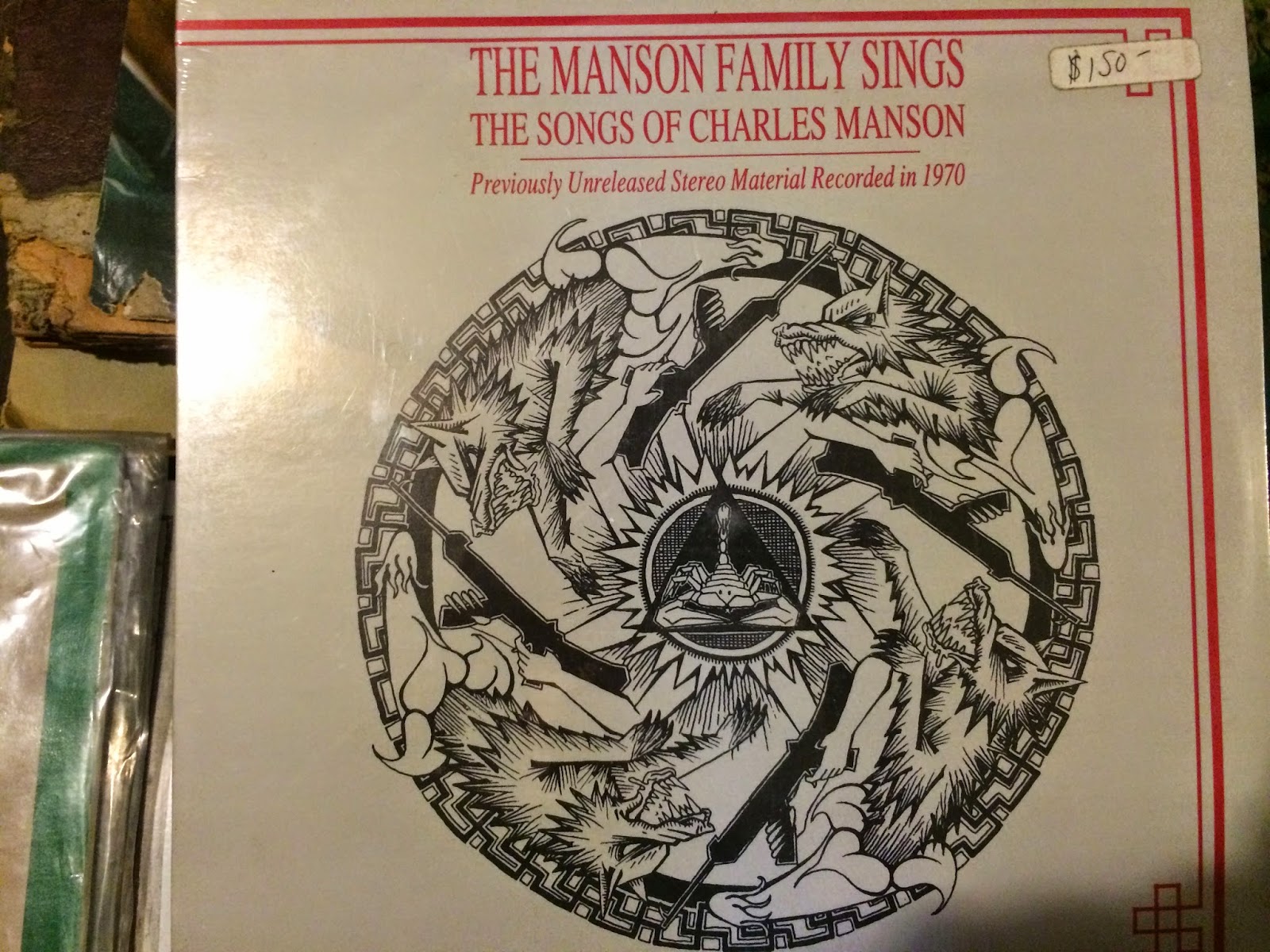 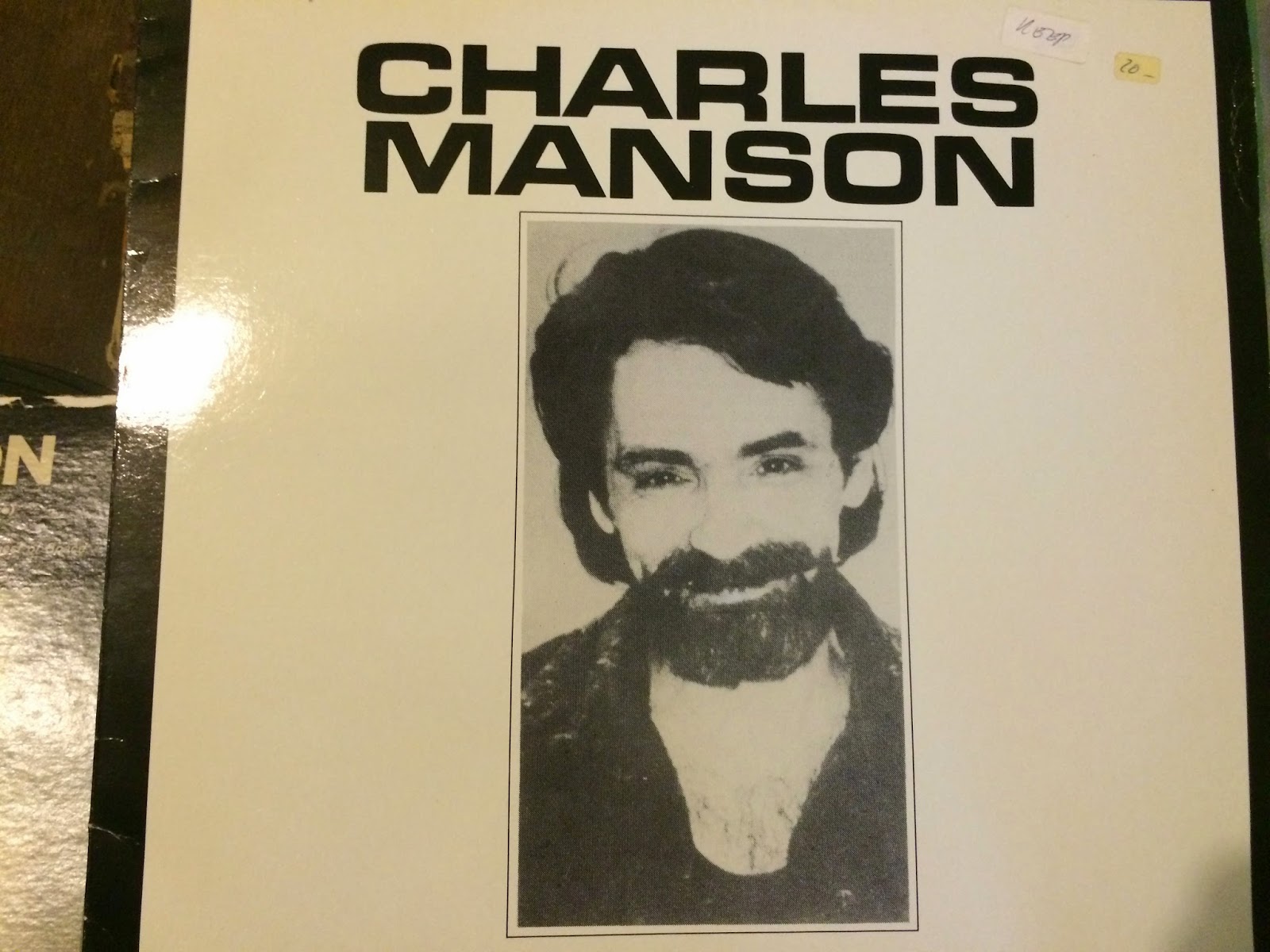 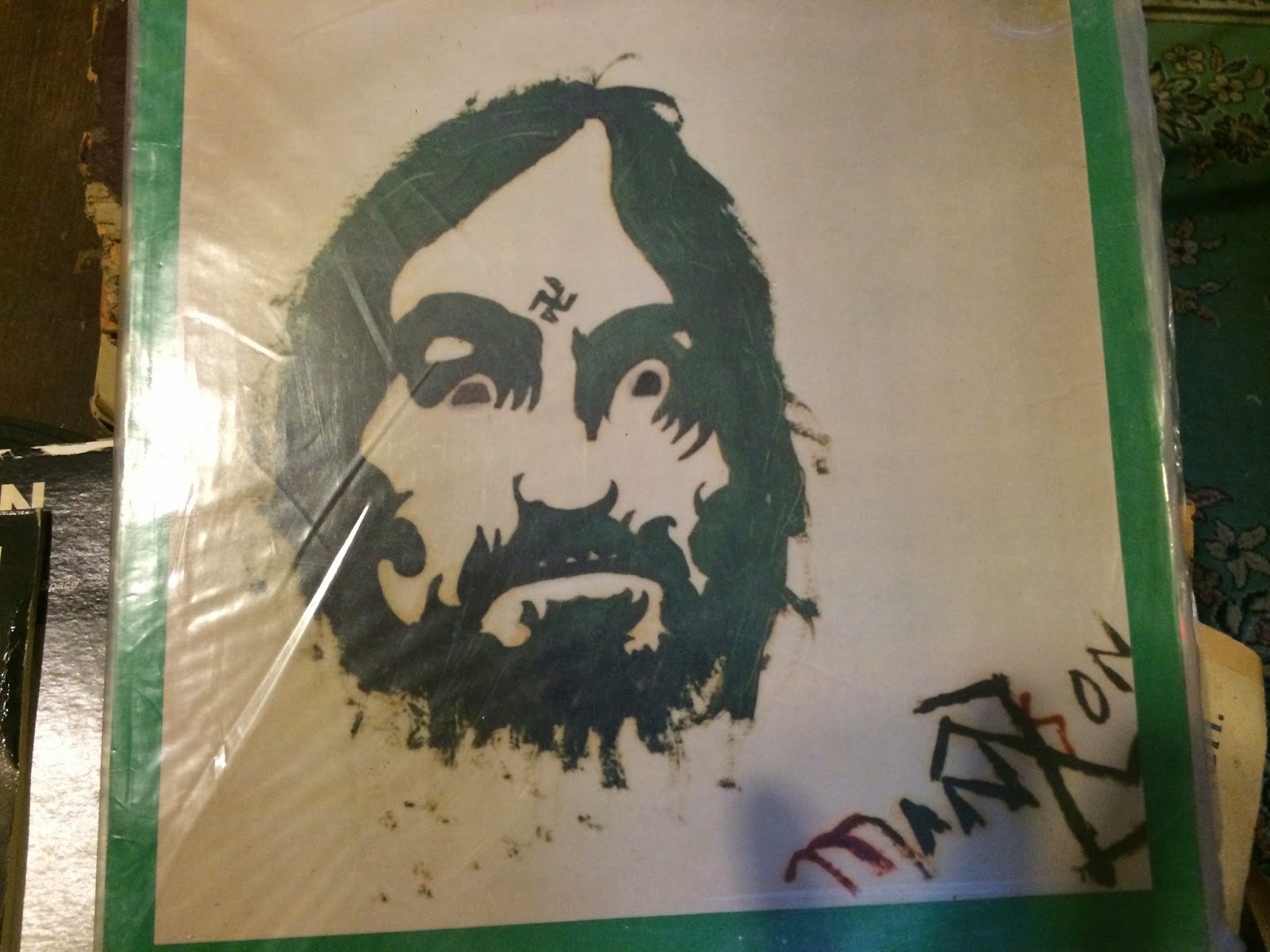 Aes-Nihil's personal Manson bookshelf (there are separate collections of books around the property, but these were within reach of his bed: 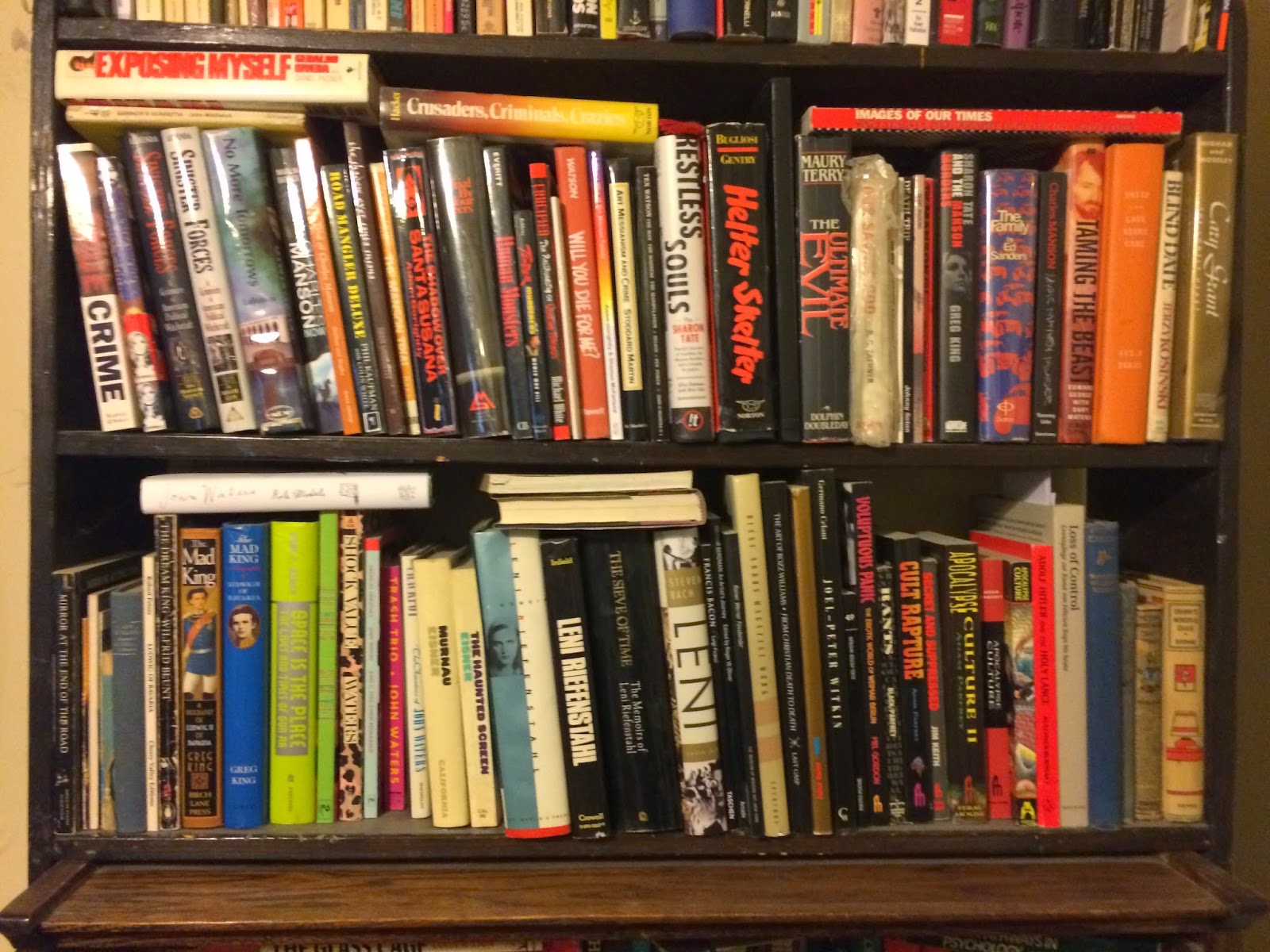 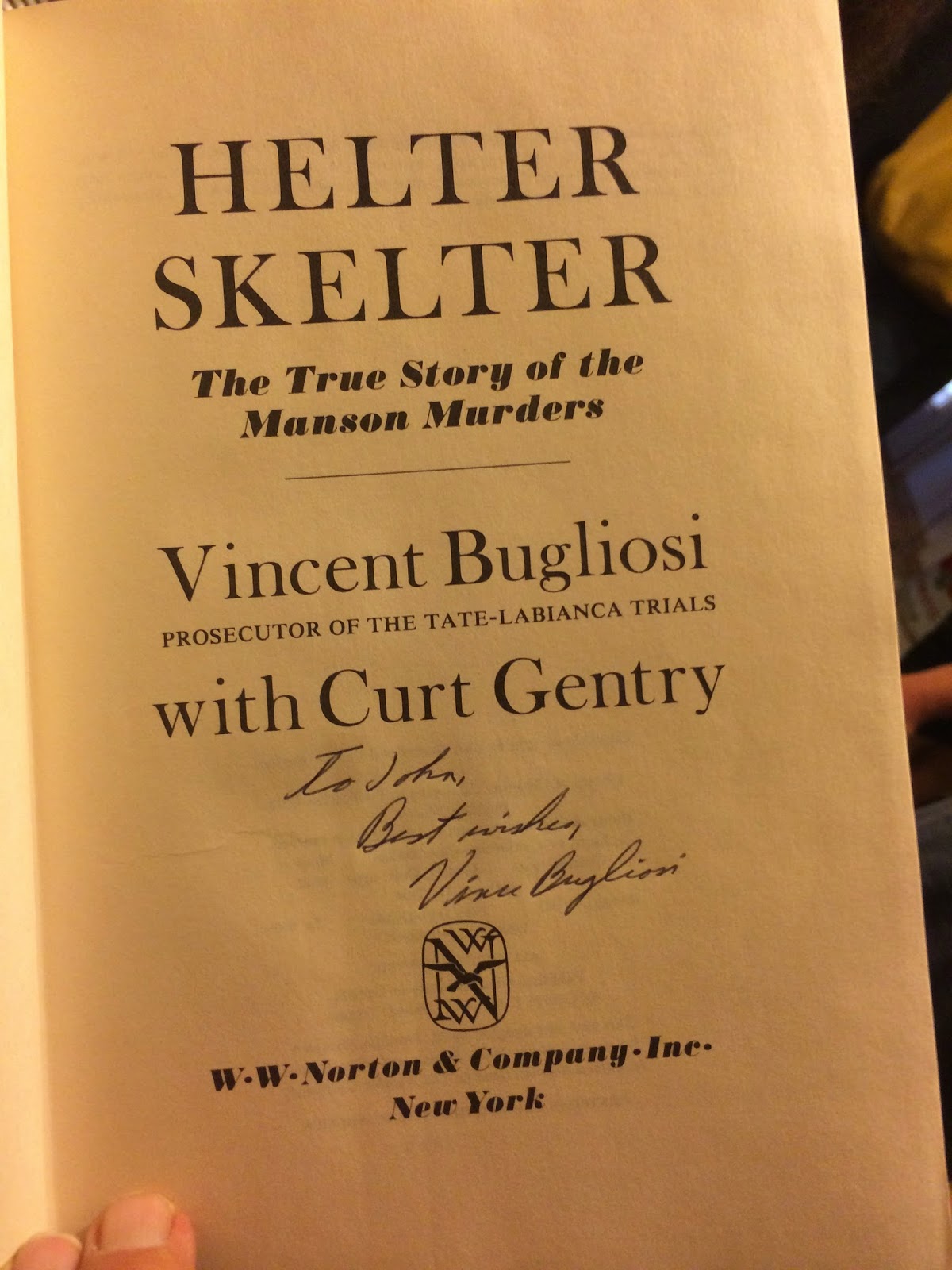 A hard-copy edition of Stranger in a strange land: 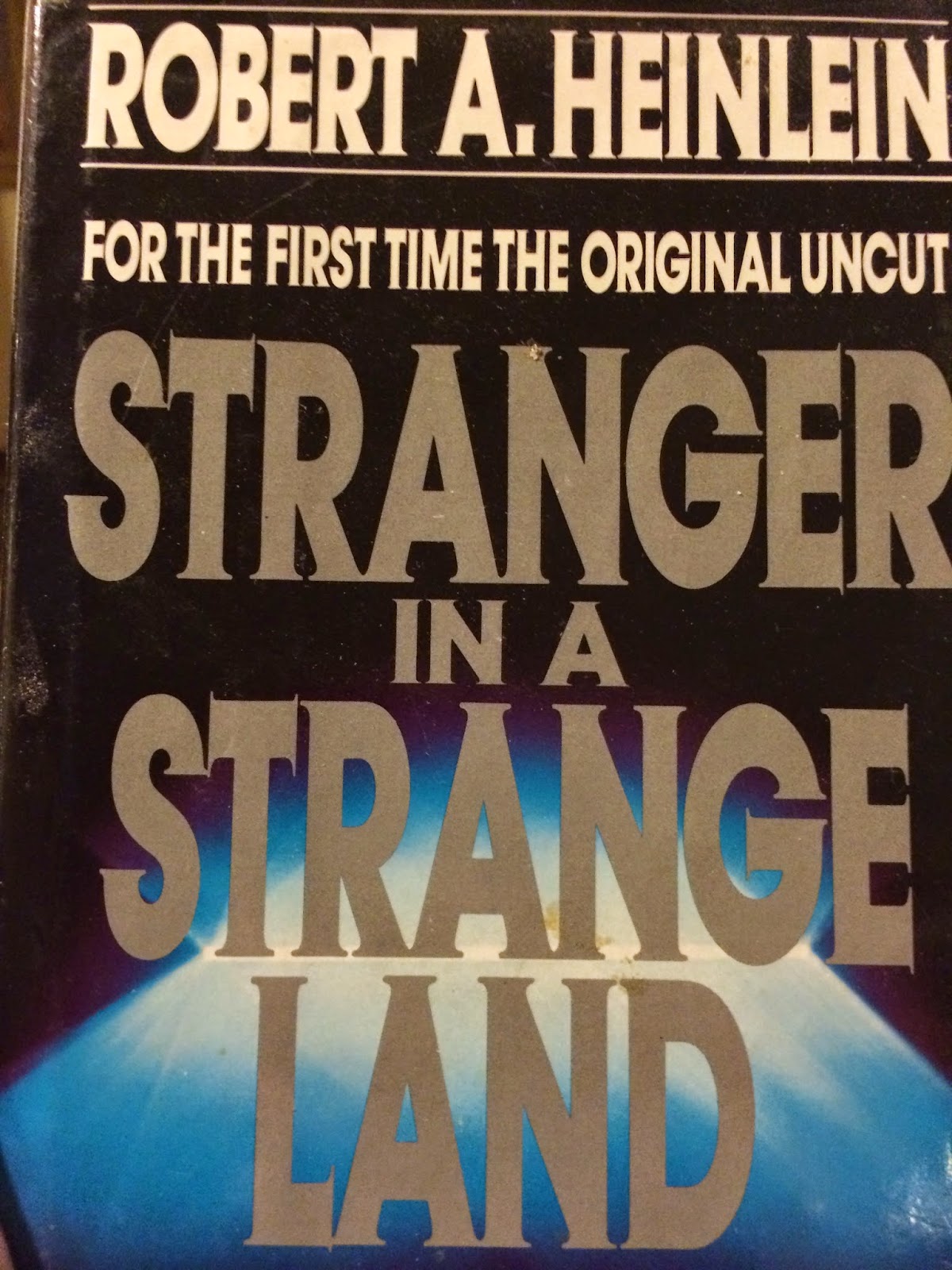 This is an original copy of Mel Lyman's "Autobiography of a World Saviour". Below is a first edition copy which John explained is extremely rare. Mel Lyman headed The Lyman Family and the The Fort Hill Community. Manson reportedly corresponded with Lyman as he was "already doing what we're trying to do".

You may have heard this quote:


The only difference between us and the Manson Family is that we don't go around preaching peace and love and we haven't killed anyone, yet.
– Jim Kweskin (perhaps in jest) 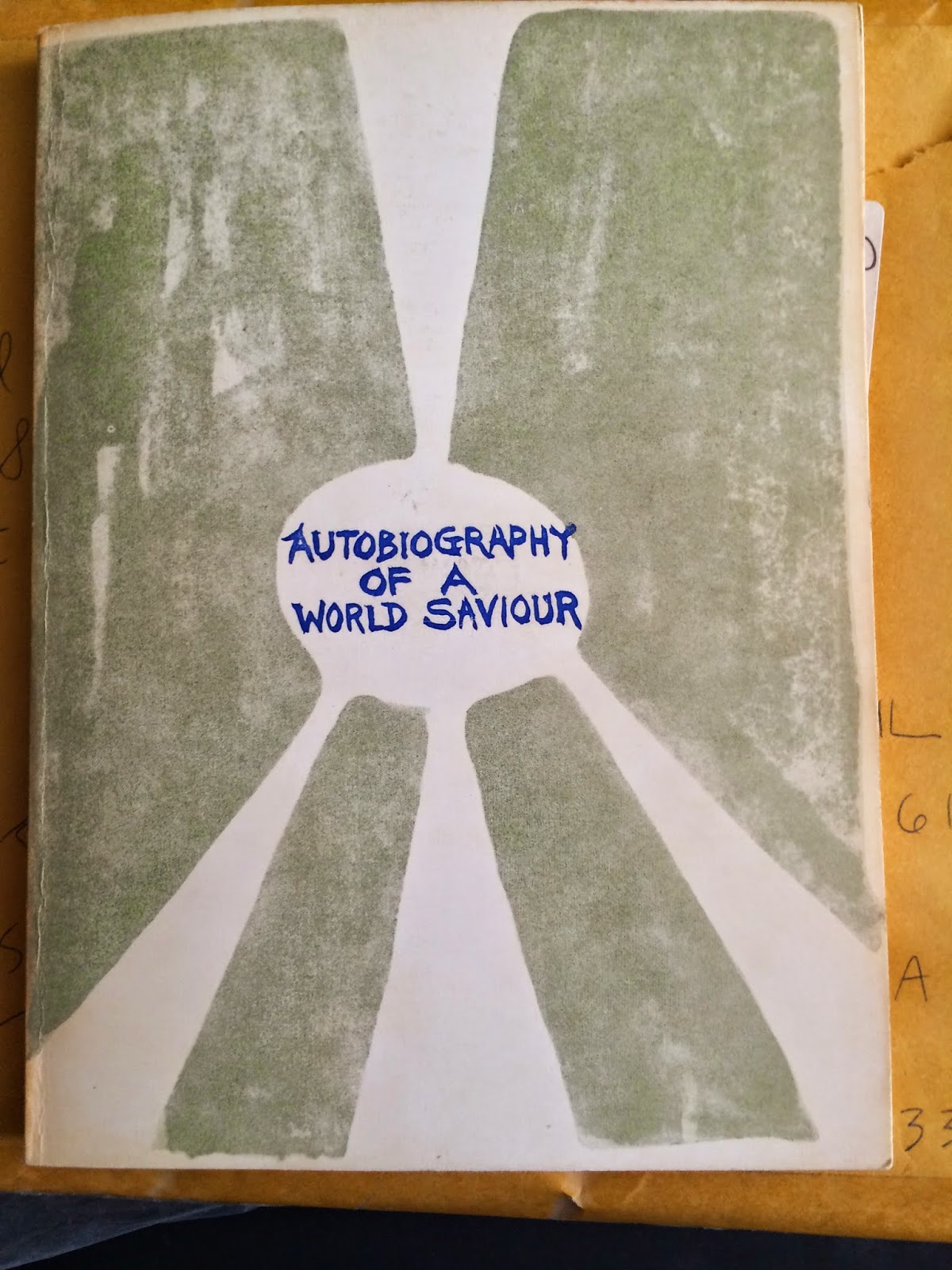 Lyman addressed in The Freep: 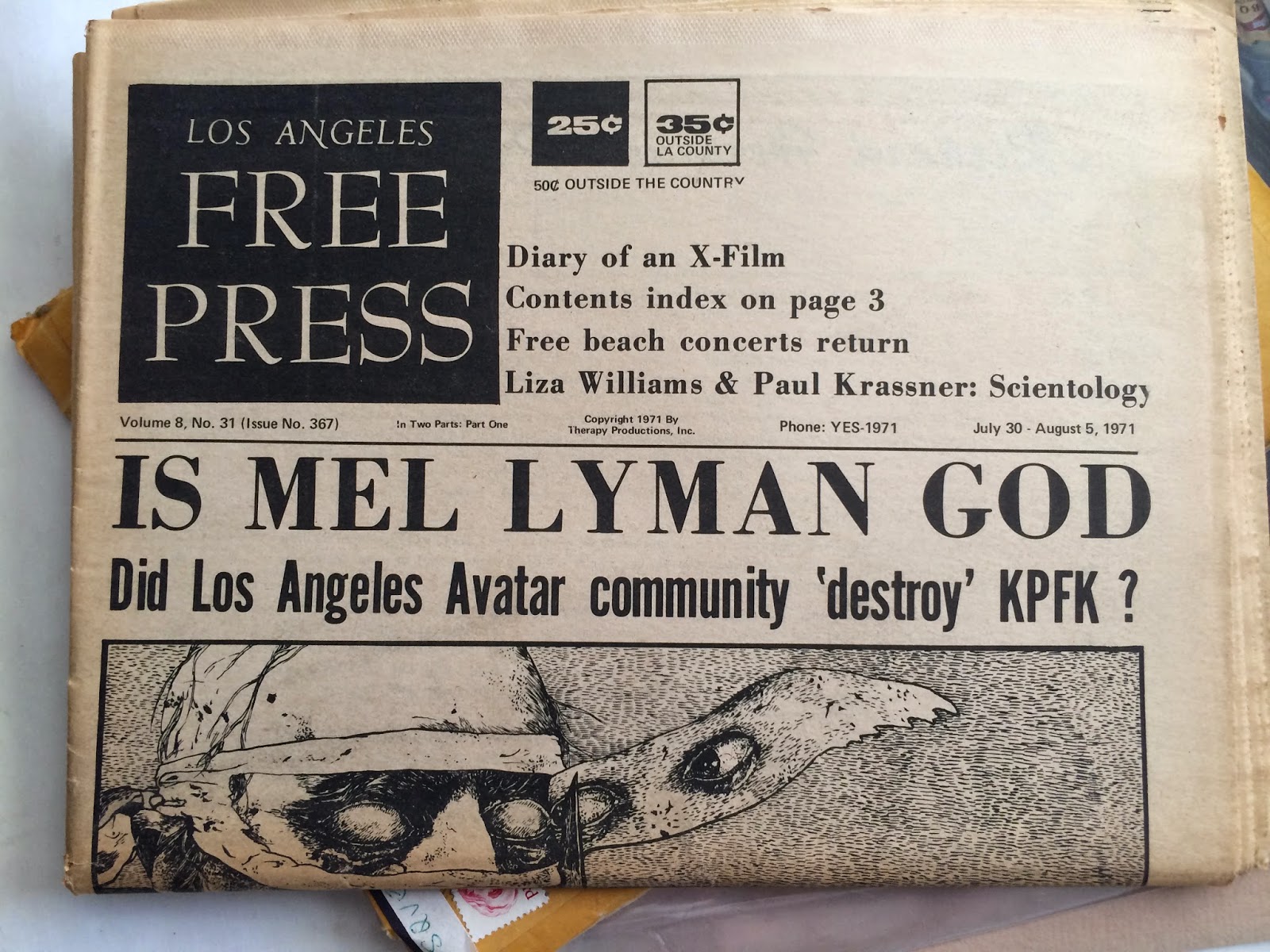 Speaking of The Freep: 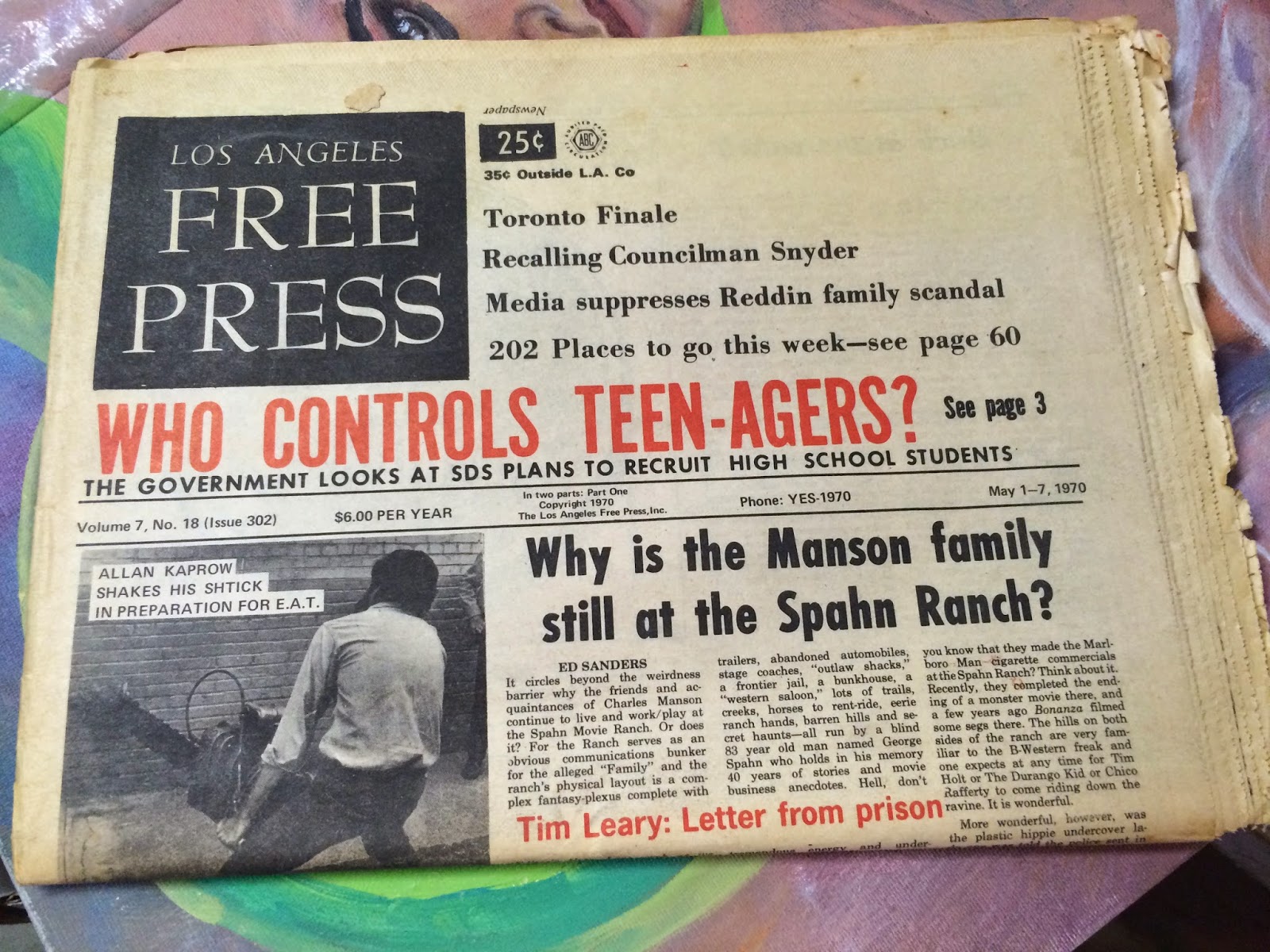 Ok, now here's a gem we just COULDN'T pass up. "The Psycho-Sexual History of the Manson Family". It's origins are not verifiable (yet). After perusing random sections of 850 pages, we were giddy enough to purchase a copy. Readers, you'll be hearing about this one over the coming months!

I randomly reached into that briefcase grabbing about 40% of the pages, cutting it like a deck of cards. The first thing I saw were these gems. All touring stopped as I gathered the group to look. How can anyone pass this up?

A prison sketch by Squeaky Fromme. John wasn't positive if it was original or a really good copy: 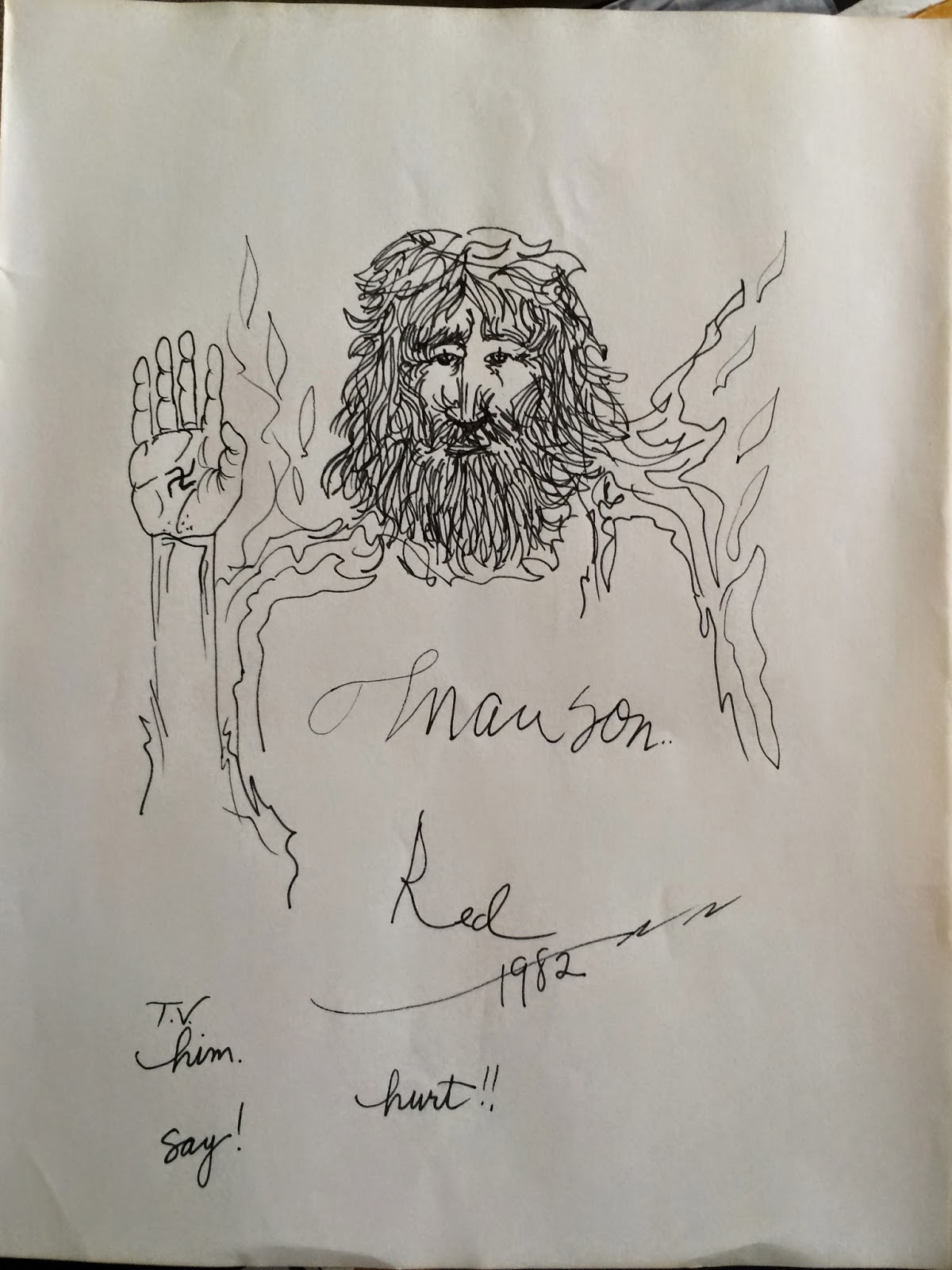 John showed us a photo of Steven Parent's corpse on the table at the coroner's office. This is a photo none of us had ever seen before. It gives a glimpse into the rarity of some of the items included in his collection. I'm no expert, but judging by the photographic paper I could be convinced that it' is original.

Out of respect to the victim's families we shy away from posting post-mortem photographs directly on this blog. However if you want to view it we have made it available to our readers HERE. If you do not like to see graphic content, DO NOT click the link. 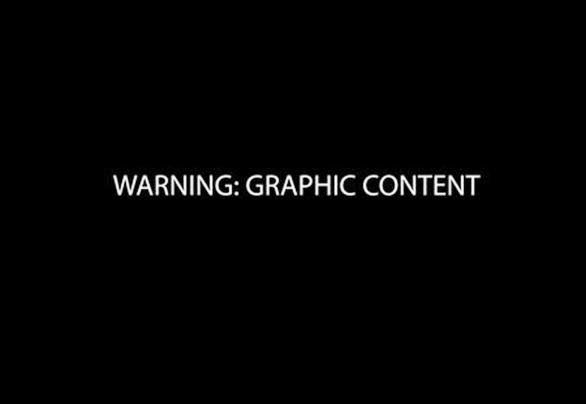 Saying our good-byes. Thank you, John for your hospitality, patience and generosity with your knowledge! 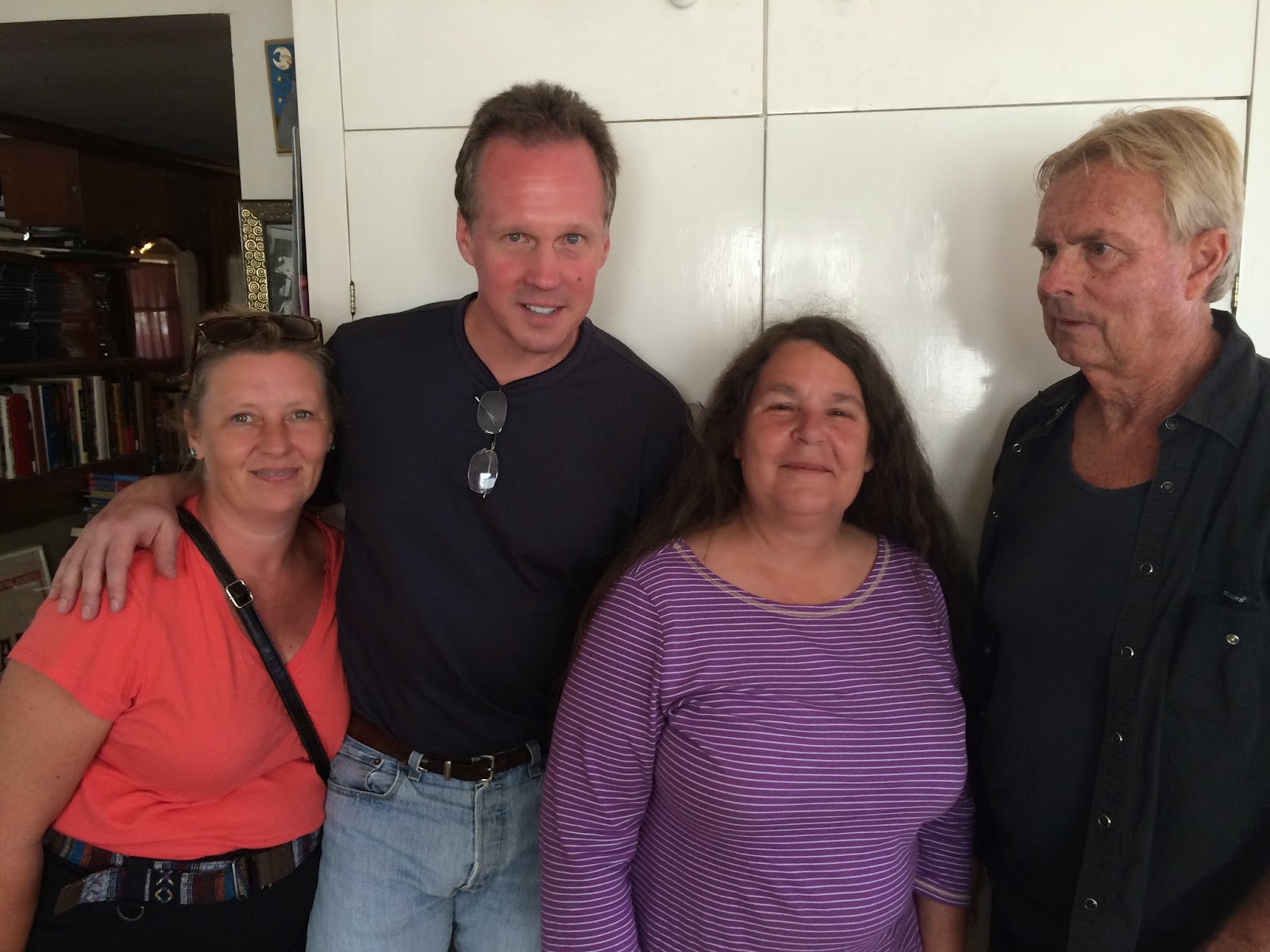 John is the only honest Manson dealer I have ever dealt with.

Yes Beauders, he is a solid guy.

It's actually kind of an inside joke.

Anybody recognize the handwriting?

What was that? The description of the sex? Were they making sex tapes? Wow! Mary Brunner was butt banged. You learn something new everyday.

Ok now that sounds like MY kind of reading! Can't wait for the book report! That is obviously female handwriting. Squeaky maybe?

Very sharp thinking Cielodrive. Shaved heads - maybe coincidence, BUT swastika NO.
This is the real story of the MANSON case - nothing makes sense as presented by the STATE, but IF ALL the pieces to the puzzle are arranged in their proper perspective, IT ALL makes sense.

It's just like the ESTABLISHMENT's "Education" CON game! IE: The government scammed so many into DEBT for an "Education" that NOW they can't buy a house until they pay off their student loans. BUT by the time they pay off the loan, house prices will be highly inflated AGAIN.

The GOVERNMENT is NOT your friend - just read the US CONSTITUTION.

It should glare back at YOU, just like the 1970 date on the MANSON girl picture did to Cielodrive.

Perhaps he reworked it?

Evidence would suggest that he was either Clairvoyant or Confused.

As the Brits would say, he gave her one up the marmite motorway.

@Suze,... dont think its Squeaky who wrote down the ,,script,, for maybe a Snuff movie, because She is on the list of ,,Actresses,, too. And I do also think the actual Dates on the paper are fictive, for the movie. And my good guess is that the title would have been ,,In Hippy Land there were those People.....,, There is also another male ,,acting,, in the movie,called Jack, He is blowing ,C, in the beginning ,while Brunner watches. Who was that ,JACK, ??

Bellz, is Jack the prison buddy who traveled on the bus and did not care for LSD?

Trippy stuff. I'm gonna have to check it out in depth.
I just placed "Manson Family Movies" at the top of my DVD Queue in Netflix. It says "Very Long Wait".....

The handwriting on Squeaky's prison sketch made me double-take. It looks exactly like mine. Oo-ee-oo?

Also digging the cover to 'The Manson Family Sings', despite the Nazoid vibe. It is an absolutely fantastic drawing. Would love to know who the artist is.

You guys were a helluva lotta FUN!

Wow! Look at all this cool stuff! My favourite picture of people people visiting the Manson cave of all time is the pic where John Aes-Nihil and two friends are sitting in the early 1980s, looking so goth. The talent of Manson and his friends has always amazed me, music, painting, embroidery, and more. Amazing art is also inspired by the Manson people. John Aes-Nihil's movie, and of course Hendrickson's movie which I've watched so many times I've lost count, and many paintings. Theres a shop on etsy that only sells ATWA inspired jewelry. Yes I have purchased two pieces because they are really unique. I still listen to Lie. I was listening to it last night and I've heard it hundreds of times since I was a teen, but I was thinking this is really a classic album. It's really great album. My friends disagree, but they just don't get it.

I've been working on a diorama of Spahn Ranch for years. Every building is hand built. Started with popsicle stick frames and then reinforced the outsides with salvaged pieces of wood and and wallpapered the interiors of the rooms. So far I've only completed 3 buildings. I work on terrain a lot. I add a lot rocks and small soda bottles meant for doll houses from craft stores. I always imagined that Spahn Ranch had a lot of litter and trash, like bottles on the ground. Am I correct? Anyone who was ever there, please let me know. I wasn't born until 1975, it was already burned down by the time I was born. i'm trying to make it as historically accurate as possible.

Barrie, take a diorama photo and send it to us if you want. We'd like to see it.