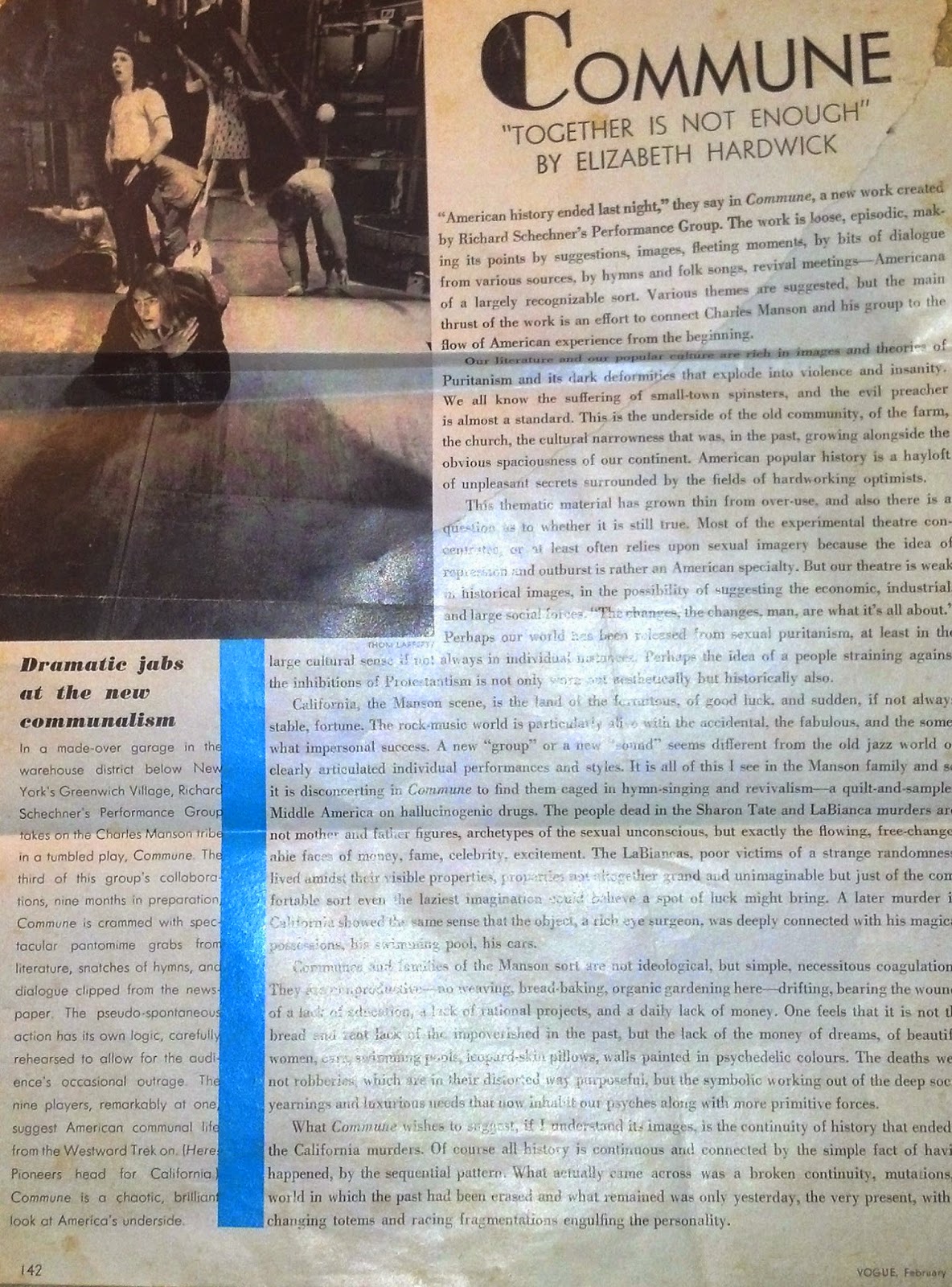 Patty's friend Zachary came up with another beauty for your reading pleasure, this review of a Richard Schechner1971Greenwich Village play called "Commune."

The nine players, remarkably at one, suggest American communal life from the Westward Trek on...

Various themes are suggested, but the main thrust of the work is an effort to connect Charles Manson and his group to the flow of American experience from the beginning...

Our theater is weak in historical images, in the possibility of suggesting the economic, industrial and large social forces. "The changes, the changes man, are what it's all about..."

The people dead in the Sharon Tate and LaBianca murders are...the flowing, free-change able faces of money, fame, celebrity, excitement. The La Biancas, poor victims of a strange randomness, lived amidst their visible properties, properties not altogether grand and unimaginable but just of the comfortable sort even the laziest imagination could believe a spot of luck might bring...

The deaths were not robberies, which are in their distorted way purposeful, but the symbolic way of working out of the deep social yearnings and luxurious needs that now inhabit our psyches along with more primitive forces.

What Commune wishes to suggest, if I understand its images, is the continuity of history that ended in the California murders."

Heady stuff, Patty. "The continuity of history that ended in the California murders".

I guess that is why we still discuss TLB 45 years later. Was it indeed a seminal historical event or was it just a random happening made infamous by excessive media coverage?
I hate wishy/washy answers but it was probably a 50/50 thing.

It was a culmination - a perfect storm of cultural forces - but it was also just a bunch of delusional idiots lashing out. Interesting that the statement says 'California murders' as if they couldn't have happened anywhere else. Would the Manson Family have turned killers if they had been based in Vermont for instance.

There have been many Plays, Movies and TV shows related to the Manson Family story, but even Steve Railsback never made it to the "A" list of actors. Did ANYONE make it big time AFTER playing in such a venue ???
Just curious !

Good question Robert, Patty cannot think of a one...

Robert I am remembering someone who became well known played William Garretson in Helter Skelter. I looked for it on IMDB but it's not in the credits.

Oh there it is...it was John Gries, not exactly a big name but he was in Napolean Dynamite and Men in Black.

First, California and specifically Hollywood is America's MECCA. It truly is the land of "dreams" where the Greyhound bus station has long since been the gateway to heaven OR Hell - whichever you prefer. The other 49 states are where the "delusional idiots" as you call them, come from.

The "delusional idiots" as YOU call them, are America's children - that their parents didn't want - so they became runaways. BUT the President of the U.S. saw a use for them - to drown in the rice paddies of Vietnam for HIS personal agenda.

I suppose the only exception might be Charles Manson (born and raised to be a lifetime prisoner) physically apart and away from the "the Great Society."

As usual, RH, with all respect your thinking always is to abstract for me to grasp. I've never been able to make the connection between TLB and Vietnam that seems at the core of your analysis.
As for the "idiots" tag, I am just borrowing from Harold True and others who were there. Though I did spend some time in a couple of communes in New England during the 70's and nobody acted like the Family.
Take away TLB and you still have a wealth of imbecilic nonsense from the creepy crawls to the excessive nihilism to the rampant STD's to inappropriate crapola with kids and on and on.
If you want to argue that American society 'created' this behavior that is of course your prerogative and perspective.
I just see it otherwise - these "idiots" were of the self-made category.

My apologies to everyone on the mailing list who got a 14+ mb email of Deb's Michael Brunner article.

I "upgraded my OS a couple of days ago and apparently it changed the way those things get sent in that it makes the images attachments instead of serving them from web servers.

I'll send it again from home tonight and it will be nice and easy to download.

@ Robert Hendrikson says;
There have been many Plays, Movies and TV shows related to the Manson Family story, but even Steve Railsback never made it to the "A" list of actors. Did ANYONE make it big time AFTER playing in such a venue ???
Just curious !

If youre out there Zachary, thanks again! Patty appreciates your archival talents and kind advice. xo

Matt and Deb: I enjoyed what I've read so far of the Michael Valentine article, especially the part where writer Cookie Mueller gives her impression of the Manson girls when they were in the Haight Ashbury; "Maybe it was their dull eyes, maybe it was their girlie prattle, but they seemed like boring people, dressed like hippies. They were like ducks quacking over corn..."

Image that every time a "teacher" in school mentions an ABSTRACT idea (like God or Socialism) he/she has to issue a disclaimer that such a "theory" is based on pure speculation - that there exists absolutely NO physical evidence showing a "connection" between EARTH and GOD.

NOW, carefully read what ANN just wrote and view the photos which certainly show a "connection" between Debra Tate and Arnold - IF the photos are TRUE. AND we all know there is a definite CONNECTION ( "conflict of interest" ) regarding Bruce Davis and the "governator." BUT with Arnold, there is actually a possibly that HE was ONLY aware (at the time 1976) that HE was ONLY inserting HIS round peg in a round hole. He may NOT have even been aware that the hole was "connected" to a violent "history." So IF he was unaware of Tate's situation, what would be the extent of that "conflict of interest." I suspect Bruce's lawyer would love to see this POST.

You see LEARY - your entire life is a culmination of compounding ABSTRACT ideas - and that is what makes it so hard to understand what the fuck is really going on. Especially because TRUTH is so subjective.

Whether there was a "connection" between Vietnam and TLB - I did NOT say that. YOU somehow invisioned a "connection" with my statement that the President was involved because of HIS personal Vietnam agenda.

This POST can go in many directions and in some ways it is newsworthy TODAY. Hey - here's an ABSTRACT idea: Arnold borrowed some pills from Polanski and was merely prepping the young'ns for some minor sex. If the girls had TOPS on that would be one thing, BUT topless - come on LEARY - you take the discussion from here.

Mr. Humphrat said "...especially the part where writer Cookie Mueller gives her impression of the Manson girls when they were in the Haight Ashbury..." Is this the same Cookie who was part of John Waters' Dreamlander stable? Please Mr. H., can you give me the link to this Michael Valentine article that you speak of?

Bucpaul, The Michael Valentine article is something we sent out to the people on our mailing list. To the best of my knowledge it is not online.

BucPaul should I forward it to you or did you get it?

And BucPaul I really don't know anything about who Cookie Mueller is.
Mr Hendrickson, if you see this, what I've read would suggest JFK may have been ready to get us out of Vietnam, but do you think he was as culpable as LBJ and Nixon?

"If you want to argue that American society 'created' this behavior that is of course your prerogative and perspective.
I just see it otherwise - these "idiots" were of the self-made category."

Leary, i am with you.
Homo homini lupus est, or man is a wolf to [his fellow] man. I am sick of hearing criminals are a product of society. It's like saying all men are good, society is what made them do what they do.
We all have bad behaviour too, but there are people who go beyond the line. That's about all.
I know some people don't like the Bible but just think about Cain & Abel. It's all there.