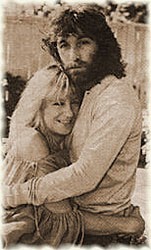 Dennis Carl Wilson was born on December 4, 1944 in Hawthorne, California, the second son of Murry and Audree Wilson. He was only sixteen when the Beach Boys were formed; the group consisted of Wilson brothers Brian, Dennis, and Carl, cousin Mike Love, and friend Al Jardine. Handsome, rebellious Dennis, who was often the object of Murry's harsh temper, spent much of his life chasing girls and getting into trouble of one kind or another. His relationships with women tended to be passionate and tumultuous; he had just divorced his second wife before he and Christine McVie fell wildly for each other in 1979 while Fleetwood Mac was making the Tusk album.

Christine referred to the drummer as "a multifaceted jewel...Dennis has thrown me into the deep end, literally and figuratively." For two years, the couple more or less commuted between Wilson's ketch at Marina del Rey and Christine's house in Coldwater Canyon-- they had even made 'definite' plans to marry. Although he was adored by Christine as well as other members of Fleetwood Mac (Dennis and John McVie even used to have drinking contests after Mac gigs), the Beach Boy eventually proved to be too eccentric for Chris to handle. Lindsey Buckingham recalls, "I knew him pretty well. . . . he was a good guy. He was kind of lost, but I thought he had a big heart. I always liked him. He was crazy just like a lot of other people, but he had a really big heart, and he was the closest thing to Brian (Wilson) there was, too. He was halfway there." 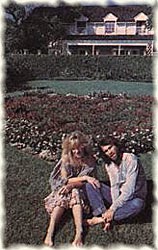 Mick Fleetwood, who had introduced the pair, wrote that Chris "almost went mad trying to keep up with Dennis, who was already like a man with twenty thyroid glands, not counting the gargantuan amounts of coke and booze and pills he was always shoving into himself." He surprised McVie once by having a beautiful heart-shaped garden planted in her backyard (shown at right); she later learned that he'd charged it to her. Wilson crashed Christine's Rolls Royce so many times that finally the vehicle had to be written off. He would storm through her house in a drunken rage, breaking things, before leaving for a few weeks to get himself together, at which point the two would reconcile yet again. Needless to say, Christine soon tired of this and called an end to the relationship. The couple did not part on very amiable terms and had not seen each other for about two years when she received news of his death; "My secretary called me up at eight in the morning. I knew something was wrong. She said, 'Dennis drowned today.' And my first reaction was to say, 'My God, is he all right?' I still really can't believe it. He just seemed indestructable." The thirty-nine year old drummer drowned on December 28, 1983 while diving off the boat slip on Marina del Rey (an autopsy showed he was legally drunk) and, with a special dispensation from the White House, was buried at sea.

They don't make 'em like that anymore. Except for Justin Bieber of course.

The part where Dennis made that grand romantic gesture of the heart shaped garden and charged it to Christine was something you could actually see Charlie doing.

Murray Wilson was such a piece of work, it's hard to imagine how Dennis could have turned out much different. A shame really.

Given the way most kids are raised it's a miracle most of us aren't serial killers.

Well now I don't feel so bad for Dennis that the family crashed his Ferrari. They crashed it before he had a chance ;-)

Suze, given the way my two-year old talks to me when she doesn't get her own way, it's a wonder most parents aren't serial killers.

Hmmm, 1944 ? Dennis was ripe for the Vietnam War Party ! Wonder why HE could NOT attend.

Maybe the answer will be revealed in the new David Ducoveny "Aquairous" Manson case detective mini-series-slated for airing beginning May 28, 2015.

We are sold OUT of the MANSON book, except for some copies with a few miss-aligned printing on some pages.
Also OUT of "Inside the MANSON Gang" DVDs. Now I suppose I'll have to order some more DVDs - in case the new TV stuff sparks some interest. Damn - just when you think it may be over - it looks like it will NEVER end.

Susze, we're on the same page. Start making note of ALL the BAD fathers involved with this case and you will see a definite PATTERN.

BTW - Most young men, at the time, were shitting in their pants at just the thought of DYING in the rice paddies of Vietnam, BUT poor Dennis had an even worse fear -- DYING at the hands of the MANSON Gang.

Reading Brian Wilson's bio a few years back is what peaked my interest in Manson. He only briefly mentions Dennis/Manson run in but i was still surprised enough to look in to it. Murray was a scumbag who specialised in humiliating and terrifying his sons. He seems to be the one responsible for Brians lack of belief in himself from the very beginning of the Beach Boys. I think the book was co-written by Brian Wilsons therapist who many hated for taking advantage of his depression and taking control of his finances and giving him shite advice concerning life choices

I saw the Beach Boys at the Pacific Amphitheater in Costa Mesa, CA in 1984 or 85 after Dennis passed away. Damn They were good.....

Hey JC, If what Mackenzie claims is true, Murray is not even close (but still a prick).

try this on for size:

Why bury him at sea?

Possibly that's what he wanted.

I should add this happened not long after the kerfufful with former interior secretary James Watt stating that bands like the Beach Boys encourage drug use only to be shot down by First Lady Nancy Reagan.

Murry Wilson was actually not an abusive father - yes, he did admit to smacking his boys whenever they misbehaved, but he denied beating them.
Yes, he was strict, but he did a lot of very good things for his boys: he bought a go-kart for Carl and Dennis, a BB gun for Dennis, hosted a jungle gym party for Dennis's 10th birthday, helped The Beach Boys get recognition and bought a bass guitar and amplifier for Brian.

What a lot of people don't realize is that in those days, his disciplinary methods, namely corporal punishment, were not unusual back then and Dennis and Murry regularly socialized with each other in the last two years of Murry's life.