A Shrine for Shorty

I drove by the site of the Spahn Ranch today to give a tour to a female friend who had never been and wanted to see. Our last stop was at the turnoff where Shorty Shea was murdered. I was narrating his final moments and about to pull the car back onto the road when my friend  shouted "Look! Is that him?!"

She was pointing to a white piece of paper tacked to the "Manson Tree" and I immediately recognized, even from a distance, the well-known photo of Shorty on his wedding day. Someone had put it up as a bit of a shrine to this oft-neglected victim of the horrible murders during the summer of 1969, complete with what looked like a couple of Mardi Gras necklaces. 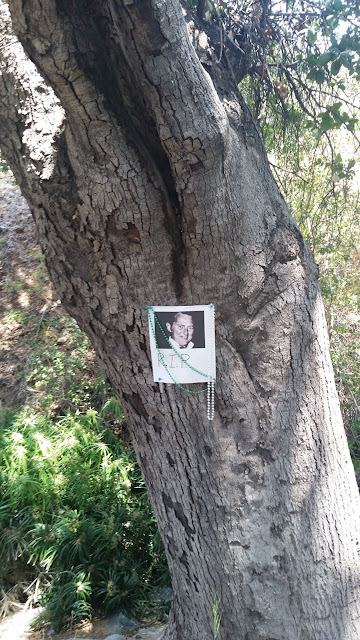 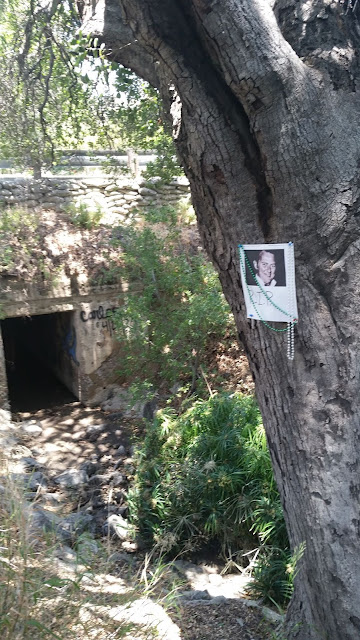 Truly the "first of the retaliation murders"

Across the road a ways lay the green of swingtown
and the orgy type 'lovemaking' in that room was a different hour or three
from the reality of the next days stark sun and horse shit and big flies
my oh my
and love and music playin' and harmony was soon to be very gone
well a goodbye bye bye
you see friends (all one or two of you)
I stood and gazed at what was the ranch in 2007 but I had not known of the spot that
Shea had met his demise (I had just been sparked to a serious interest that year in the crazy fun loving, not hippies, at Spahn.)
When I do venture to Spahn ground and up a hill I'll have a smoke and a drink
and I don't wanna hear any lip from anyone or they'll find themselves rolling down
the hill in a couple seconds
yet what about the murder of Shea and the life of this fella eh?
Shea was irresponsible alright and so as a cowpoke and a bum he married, he fathered and was not a good guy when it came to such matters
but wait if he went from this female to that, some underage, how was that different from what we constantly read about (rest in peace, there is redemption) brother Charlie? The life that was lead with the ladies and so on?
In showbiz, we had the sexual goings on, the heavy drinking, drug use, such as Quaaludes from the fancy houses and apartments of Beverly Hills and other hills and Canyons...ahem... to the sleazy 'musicians' in Laurel Canyon. Bringing 13, 14 year old runaways from Sunset and Venice to use after giving 'em drugs and well...
But it was the girls at Spahn that were wild and crazy?
Like the crude prosecutors saying things, during and after the persecution of brother Charlie and the Cherished girls at the trial on Temple Street...ah...Temple..?
Anyhoo, things said, for example about sweet eyes Leslie- look, 'how dolled up she is' and more ridiculous statements. Sounds to me like anti female talk. And, people on trial and in prison were always told: don't look serious, try to dress nicely as to show that you're not mean and would do violence if you had the chance and so forth. One note here (again, you say? Oh boy)
Having seen people during the disco 70's day, I gotta tell ya, the Sweeties at Spahn
were fair maidens and even more honest than a heck of a lot of American girls and, whether some of you like it or not I know, I lived it. But wait, what about the picture of Shea at the tree? I think a permanent tribute would be nice. Ask the park
people if a modest sign could be placed there and say, well. "this is about rejecting violence and so, a memory to an innocent victim." Also, I feel for Shea's children, I hope they are well, yet so many innocent children brought into this shallow society with only one patent or, not taken care of, you know, like some of the girls and a couple of the grubby guys that were hanging at Spahn had experienced. I'm sorry about Cielo, Waverly, Gary Hinman and Shea. I say prayers. Thank You- Have a nice 4th of July, I'm still waiting for an invite to a barbecue, maybe a gin and tonic or two.

Truly the "first of the retaliation murders"

Unless you consider the murders at Cielo retaliation against Terry Melcher or rich "pigs" in general. Or against society that didn't allow Chuck to be a rock star.

Look, we all go way back and uh, I owe you from the thing with the guy in the place and I'll never forget it.

Ajerseydevil said: "I was wondering what the entrance is in the background"

I'm not sure what the official name is but its a water passageway/tunnel under the highway. Flood control.

Ajerseydevil said...
"Since unfortunately I still haven't had the chance to visit the ranch I was wondering what the entrance is in the background & does it go anywhere"

According to Grogan's testimony, that is where they placed Shorty's body after murdering him. Grogan came back the next day, pulled him out and dragged him down the hill to bury him.

Ha ha I can't stop shaking my head(like it's not shook enough already) when I think of those cute:(the girls only) wacky kids at year round Camp Spahnaah. (sic)
I just though of a novelty song, don't know if any of you heard it-Hello Muddah Hello Fadduh- by crazy old Alan Sherman-1963. Only most of the the kids at Spahn didn't write home much and didn't wanna go home. Except Sadie, pregnant, relatives wouldn't have her back, they were a holes to begin with after her mom left this world.
So, look here now. With what's going on out there, I also thought that shrines, markers and statues should be left alone, not torn down or vandalized. Any of 'em any where.
Having said that, that includes brother Charlie's rock and the one that is the subject of this post about Shorty Shea. History should be respected and so, it's good that issues to do with the ranch itself are being written and talked about.

Watching Season 5 of Mannix and, Episode 10 "A Button For General D." features Joanna Petett. She looks particularly like her bff Sharon Tate in this 1971 episode...more than usual

Here's a YouTube link to the episode...I'm watching on DVD so, I can't comment on the quality this link but, it is an OK episode - middle of the pack among s fairly strong season.

Did I mention that Joanna REALLY looks like Sharon here??? lol

History (via statues, flags, emblems, etc..) glorifying/celebrating racial inequality, crimes against humanity, socio-economic inequalities, discrimination based on sexual preference, espousing or glorifying hate and/or hate crimes should be documented BUT, NEVER should such events/historical figures/symbols be glorified, celebrated or perpetuated via visible reminders of horrendous acts/people via staues, flags, symbols, etc...

Give your head a shake Bro...I gotta vehemently (but respectfully) completely disagree with you.

Well, you know, what's happening now?
What part of history is acceptable to be written and talked about?
By burning stores and the usually bad English graffiti on private and public property?
How about, in the Vietnam war America's military committed many crimes against humanity there. Shall we take down the Vietnam Memorial-where, by the way, by best friend in junior high died, as an American soldier, there, in April,1967?
How far is this attacking gonna go of statues, murals and so on?
Remove photos of Clark Gable and Vivien Leigh from studios walls and books cause they were in Gone With The Wind?
And, not allow film buffs to see Al Jolson movies, cause he was in The Jazz Singer?
Remove President Roosevelt from all pics on walls and books and such cause he approved the internment of Japanese Americans?
And how about boycotting The Beatles music cause they came from Liverpool and so, they posed with the Union Jack and well, look what was done to the Irish by Britain.
In 1965, a brave history making student, Mario Savio, made history in Berkeley, at the University campus, by leading the way, with demonstrations and speeches for free speech on campuses and against wars of choice like the war against Vietnam and for civil rights for all minorities-peacefully. He and those with him were pioneers.
Young Mary Brunner, by the way, came from the fine state of Wisconsin that year, right to the middle of those demonstrations, how 'bout that!
Abigail Folger volunteered at minority causes/places and gave money to the downtrodden at the Haight, like at the clinic. For various medical needs and for those that enjoyed getting V.D. like gonorrhea. Didn't brother Charlie and other hip types hang out nearby... he he. Or is it heh heh
In May, 1970, I and three other guys ran up and into the President of our college and demanded the dismissal of classes for a day and notices sent to all classes that we were gonna have a demonstration against the Vietnam war and that week, against the national guard for murdering four Kent State students. President Phillips said, "okay," go ahead. Cool, we did.
Mario and his friends paved the way for student unions to be allowed offices on campus that could hold activities on campus more than before and I walked into one of the first African American one and was welcomed as few were, actually. Many whites worked, argued and did good, on moving civil rights for all. I don't wanna hear any bull that puts down whites which is one of the ignorant things these days. What the hell, that's okay? Not with me, it ain't.
What and how does all of the above tie in? Well, I don't need no one out there to tell me what words I can use and what to freakin' think.
Violence blackmail, is that what it is now? Is this what we get after we worked and debated and were rushed by cops, angry 'super patriots' who were calling us communists, etc. No one these days, for the most part, appreciates what many, including good hearted Abigail Folger, along with 1.000's of well meaning whites did in the 60's and 70's. And they threaten us? Bully us old 'leftists?'
Brother Charlie met many people of different races and religions and nationalities.
Charlie was not a racist. He spent time with them in prison and on the streets of the Haight and on the floors and 'rap sessions' of those old musty smelly houses.
The 60's, I know well and most people attacking property here and there know no real history and now most of 'em out there have their own personal hang-ups and grudges. They really don't care about other groups, they're pissed off and it's all about 'me, my identity' identity politics and their self centered 'what I am' and so on.
Any one out there demonstrating against the illegal, immoral wars the U.S. is in?
Demonstrating about child abuse, or the weekly murders in the inner cities like Chicago and others?
Didn't think so.