John Linley Frazier Can Suck It 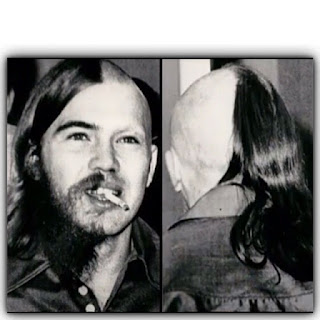 Don't sleep on the crazy. It's all there.

Say hello to John Linley Frazier if you're unacquainted. Frazier embodies my constant struggle for impartiality while I try to learn things instead of screaming for the executions of crazy people when they do crazy people things. Sentenced to death in 1971 only to have it commuted in California in 1972, Frazier hung himself in his prison cell in 2009. He likely passed unmourned.

Frazier has been linked to the Manson Family here and there since he committed his crimes fifty-two years ago. The focus of Frazier's wrath, Dr. Victor Ohta, pops up every now and then as the doctor who wrote the prescription for the spectacles found at the Cielo Drive crime scene. However, Ohta was an ophthalmologist specializing in cataract surgery. While I'm not sure how it works where you live, I visit an optometrist for my eyeglasses and exams.

Would Mae be in these comment threads trying to keep us from uncovering the names of her flim flammers if her game was in play today? I vote yes. Frazier is also linked to Zodiac because really who isn't?

I also have a screen cap I misplaced about Sandy Good knowing Frazier but it's basically the above with Sandy Good written in there sixteen times per paragraph. My apologies. She did type like him I suppose. You can verify below. 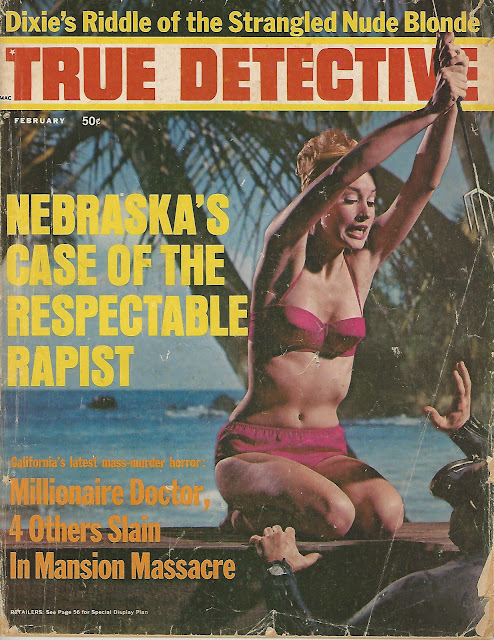 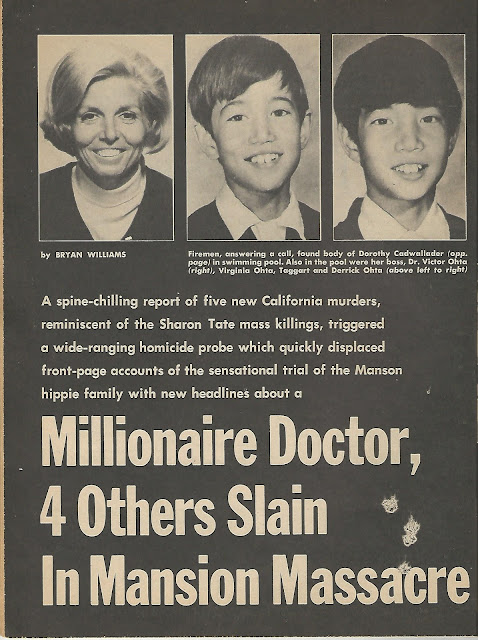 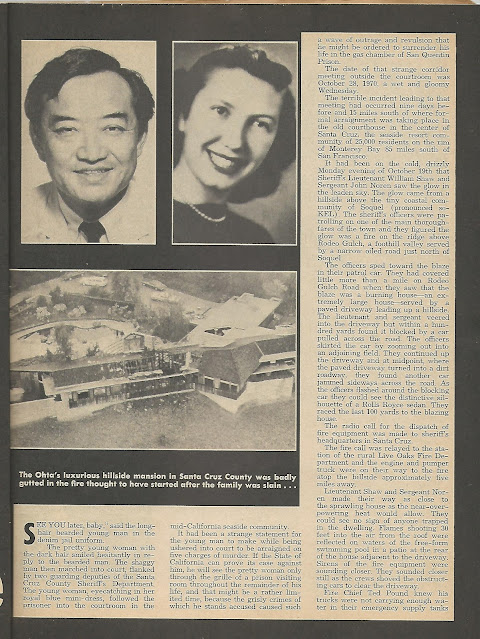 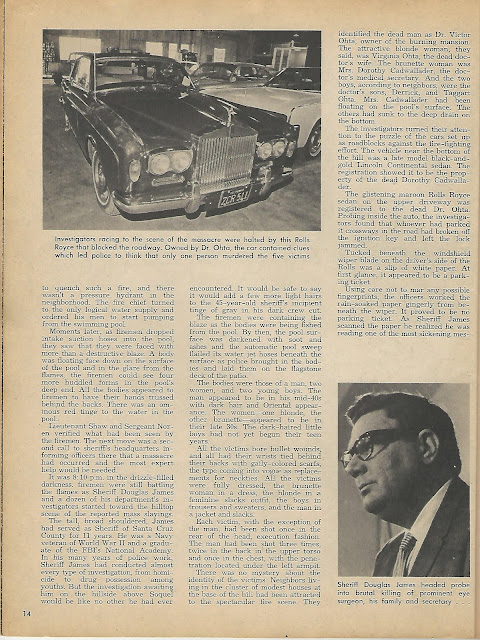 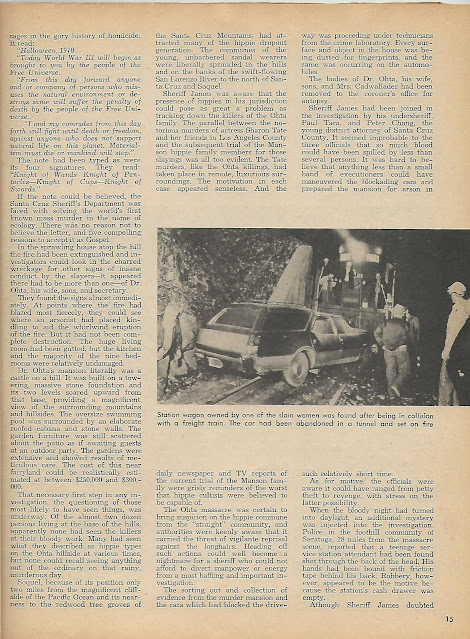 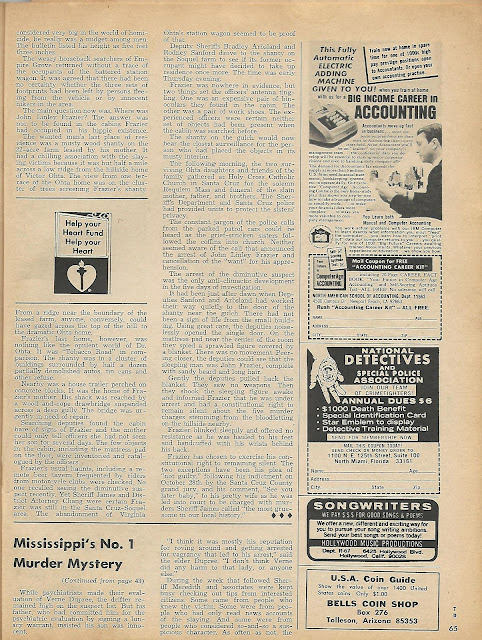 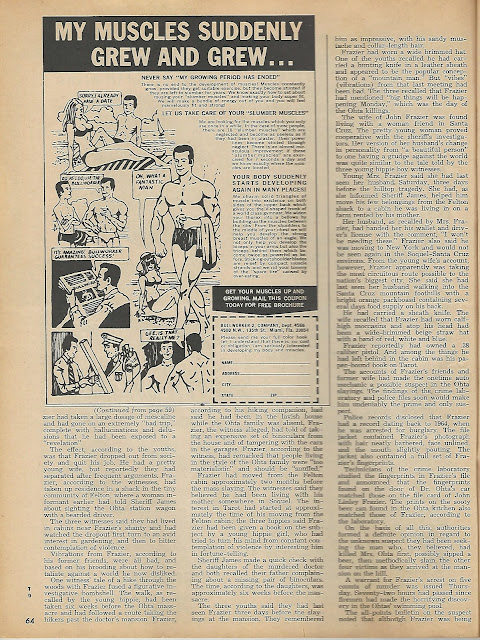 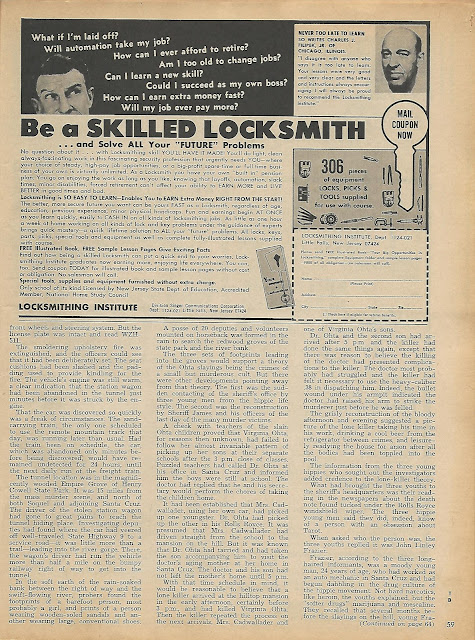 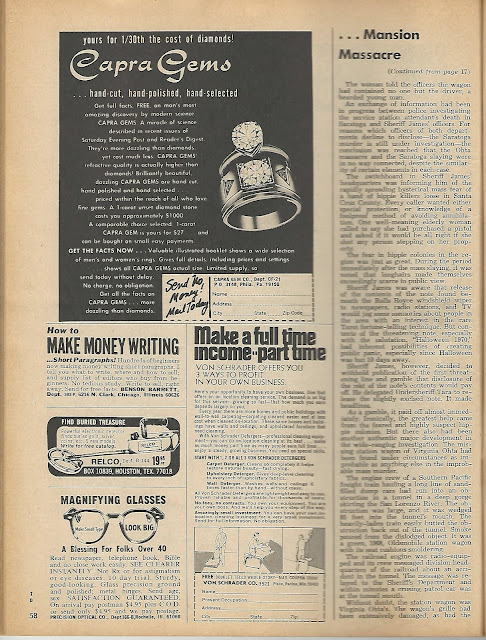 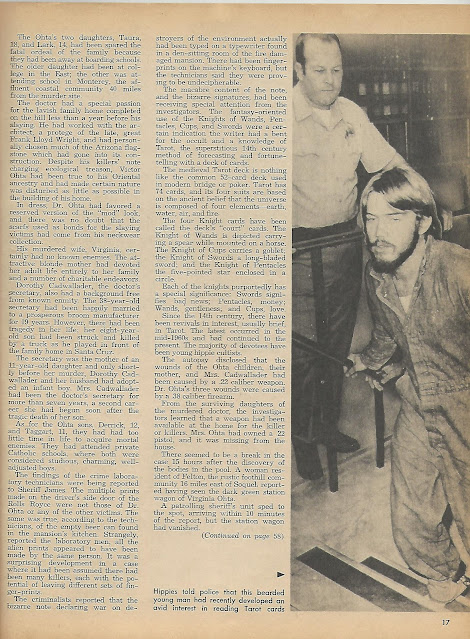 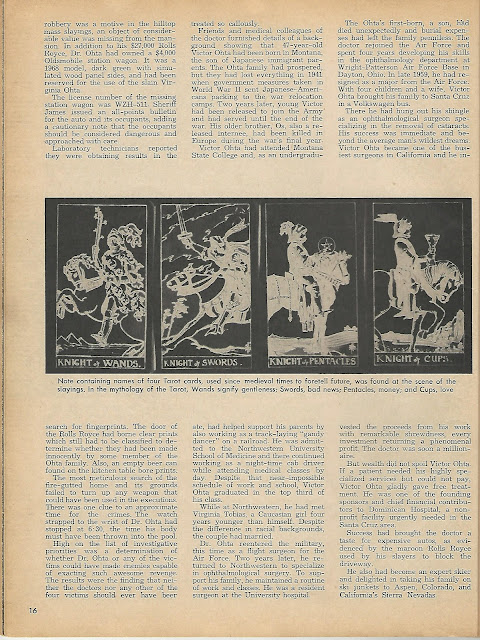 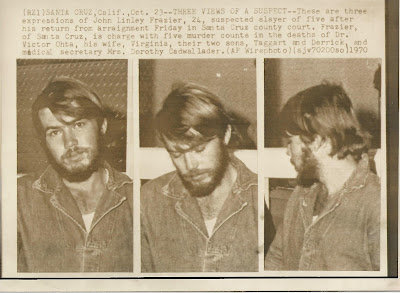 How do these lunatics always get pretty women btw? 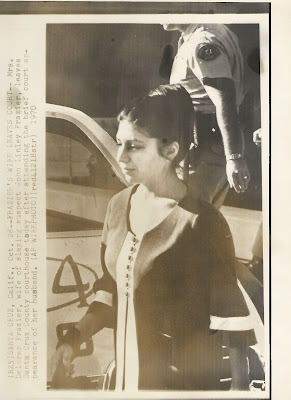 The scholars researched the ex wife. She's still kicking or we'd give you the deets. Here's Mrs. Ohta's car. 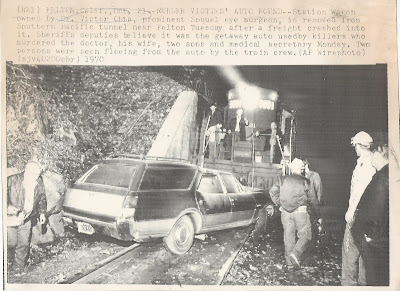 Frazier likely returned to his shack and watched the police and fire investigators comb the Ohta home for clues from the safety of the trees between his hideout and the murder scene. Not the smartest criminal, Frazier was caught with Dr. Ohta's binoculars. These are his tarot cards. 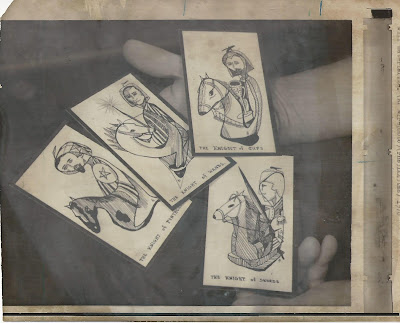 Have you ever noticed crazy people never trim their fingernails? Gross. 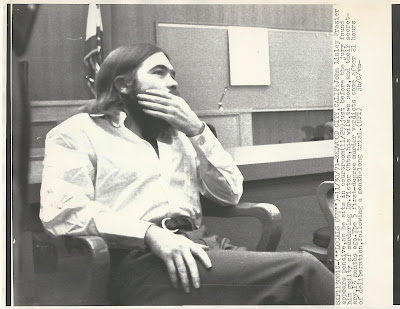 Frazier's crimes hurt my heart. Dr. Ohta's mother's and oldest daughter's suicides following the murders knocked me through the sidewalk like an ACME safe. Without protest, I'd pull the lever for the gallows fully knowing I was snapping the neck of person with a broken brain. We'd all get our revenge because revenge is all we have at the end of the day.
Fortunately, we have a bit more to celebrate this time. The daughter Frazier could not kill went on to live her best life and it's better than any life Frazier could've dreamed up even before he lost all of his marbles. He couldn't stop her. We saw her genuine smiles and joy.
The dark side did not win this time.
I had a blast putting this post together with Secret Agent Deb, Doug S., and Sir Buntline Heskey of Nottinghamshire. Many thanks to them as well as our esteem counsel for helping with the next one that is tentatively titled, I Know Why Werner Herzog Doesn't Smile in Photos.
- Gerald Greene-Whyte, Ohio.
----------- 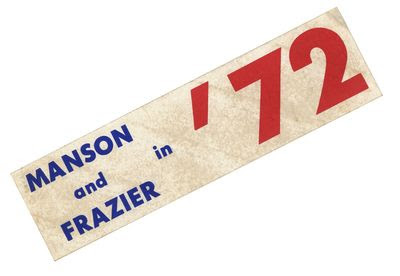 Another diminuative (5'3") troubled and mescaline soaked dude living in a shack on an environmental trip that led to the violent murder of five innocent people in a kick ass house on a hill...

"We'd all get our revenge because revenge is all we have at the end of the day."

Is this not a primary reason why the Mansonites continue to molder away behind bars?

Doug, environmentalism as a result of misanthropy? With Linley, I totally found myself wishing someone other than himself did the hanging. But then really what would that change?

Agree, Tobias. And thank you.

Dr. Ohta's secretary hit hard too. Her son is killed by a car in front of their home, she's an upper middle class housewife, she takes a new career to deal with her grief, and butthole Frazier kills her and a child she'd brought home from school that day. Awful.

Hadn't Mrs Cadwallader and her husband just adopted a short time before her murder too?!

Very sad. No words can describe the pallor of death hanging over this event. It just kept taking out people for years forward.

It would make it just a wee bit less awful. But awful is still awful...

You did all the work. That's I thanked you.

I always wondered about the eyeglasses. Thanks to all who worked hard to do this!

This guy was the stuff my nightmares as a child. Did the article say anything about the two serial killers, Edmund Kemper and Herb Mullen who were murdering in and around Santa Cruz at the same time. I grew up about forty miles north of Santa Cruz in Half Moon Bay. Kemper dumped a girls almost decapitated body on our road. For some reason he never claimed this one, but it was definitely his Modus Operandi.

Funny to see "awesome" used with its pre 80s meaning.

Curse of the glasses? Is that the Manson connection?

Kemper, mullin and this guy :. turn of the 70s santa cruz killer bonanza

I think ed dismembered to hide evidence, so not his M.O.

I've often wondered if the unsolved murder of Deborah Lee Shelton in March of 1969 was the work of Mullin, Frazier or, Kemper.

Was this near your home?

I miss those old detective magazines.

The Sommerhalder's murders were in Marin and Sonoma Counties, north of San Francisco. Johnny was denied parole for the umpteenth time last year.

There were lots of murders in Sonoma County and many of them still unsolved. Check out the website I've had for more than 10 years, Doug. santarosahitchhikermurders.com

I wonder if I can still order some X-ray specs?

That's good Green, heh, 'say hello to Frazier.'
I would have like to say goodbye to the fella.
I hate these guys.
'Hello scum punk, how ya doin'?'
That would be somewhere where there's nobody around for at least half a mile.
That would be where there are no witnesses and you have time to get rid of the gun.
'Meet my buddies Smith and Wesson.'
'Say hi to my old pal Mr. Glock, you disgusting piece of crap.'
Then, a quick 'double tap' to his belly. Gotta aim for the biggest mass, in self defense. Then, when he falls, one can walk forward, look down and say, 'How's it feel freak?' Then hurl insults and tell him that he doesn't wanna know what it feels like to be shot in the knees. Then shoot directly at his knee and say, 'bye punk, looks like your dying. What's up with that creep?' And laugh.
Yeah, we have thoughts of revenge and 'getting even,' but how else can you feel when you read of horrific crimes. Hell, it's worse now than before, murders, assaults, but the main stream media doesn't cover most of them, happening everyday across the nation.
By the way, I remenber Mae Brussell, from reading about her once in a while. I didn't know she had a radio show till I read about her. I ran across her when I saw her name next to an article headline about the killing of President Kennedy.
There were some really, horrible crimes, a lot of them, actually, in California the several years just before and just after the Cielo/Waverly crimes, but most weren't repported in nearly as much detail. Notoriety you know. Now, don't I remember reading about former Spahn
sometime resident Bruce Davis having been said to perhaps be the Zodiac killer? Come on, that was a bit too much. There were also stories such as freeway roaming killers in California and people being attacked and murdered while on hikes and constant cases of people turning up dead in the alleys of L.A. and what about Mullolland Drive and, you know.

I've often wondered if the unsolved murder of Deborah Lee Shelton in March of 1969 was the work of Mullin, Frazier or, Kemper

Kemper was still in prison in March of '69.

Really liked your website Deb. I recall stumbling upon the site during an epic rabbit hole quite a few years ago and, being very interested in the young girls cases and really absorbing the wealth of information you've posted about them.

This was probably even before I started joining the conversation here!

But, the band X-Ray Spex was killer

Yes, I forgot about him killing his grandparents and conning the shrinks (he's an extremely intelligent guy) to the point where he was assisting them with their work before being released with his teenaged record sealed.

Only to mutilate, defile and murder pretty much immediately after being released

A physically and mentally imposing (and freakin disturbed) dude

I would say Shelton was murdered by Frazier if any of the three. Kemper was still locked up and as far as I know Mullen was still 'sane' in 1969. I would love to read the article but I Cannot seem to get it focused.

For those interested in the Process, a documentary released around six years ago is up on YouTube. Go to Sympathy For The Devil Process Church and it should come up. I don't know how long it will be up so watch it soon.

That documentary was pretty good too!

Hopefully Mr Greene is okay with me suggesting this.

Thanks for that info beauders.

Thanks Doug, I think it will be easier to read on my phone than on my computer, just need to find the time. I've been reading the "Witching Hour" series by Anne Rice, and it's so good it's taking up all my spare time. I recommend it too you all but read it all together nothing in-between, "The Stand" by Stephen King is my favorite novel but this series is a close second. The books in order are "The Witching Hour, " "Lasher," "Tantos," and "Merrick." "Merrick" is usually not included in the series but I Like it as such. The first three novels are huge and take about 90 hours to read so it's a big commitment, but so worth it.