The only things we know about Manson's first arrest after being released from Terminal Island Federal Prison in March of 1967 are one newspaper article and many years later what Lynette Fromme wrote in her book "Reflexion." The section on Lyn and Mary meeting Dean Moorehouse, his daughter Ruth, and the arrest incident are on pages 107 to 113. 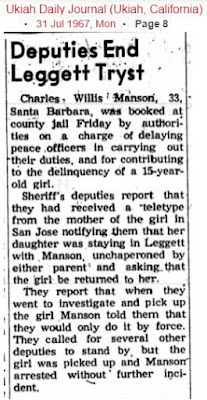 The newspaper article is brief, the headline is suggestive.  It reads as if Charlie and the 15-year-old girl were shacked up by themselves somewhere in Mendocino County. Fromme, in her book, dispels the misconception that Charlie and Ruth Ann were alone in the woods.

The police report goes even further to explain the situation. When the crime was originally written up it the crime on the first page in the upper left of the report was 148 PC (resisting arrest). Written on the second page is 272 PC (contributing to the delinquency of a minor) and 92 PC (threat of violence).  Those two crimes were scratched out and 148 PC (resisting arrest) was written above them.  So, the ultimate charge that Manson received was resisting arrest. There is no hint of contributing to the delinquency to a minor nor any charges of improper activities with a minor in the narrative of the report as the newspaper headline might have you believe.

Present at the incident per the report were Mary Brunner and Lynette Fromme. A young man named Christopher Walsh was also present. He had turned 18-years-old a week prior and his occupation is listed as musician.

The information on Manson's rap sheet, as to the charges, is at odds with what the Mendocino County Sheriff's report states.

Here is the two-page report. 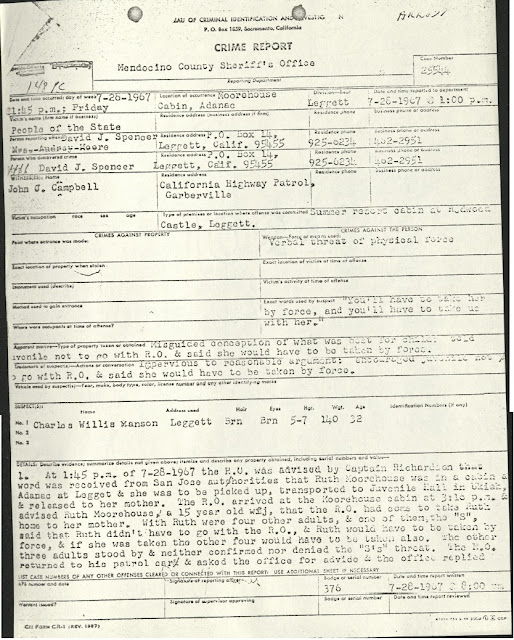 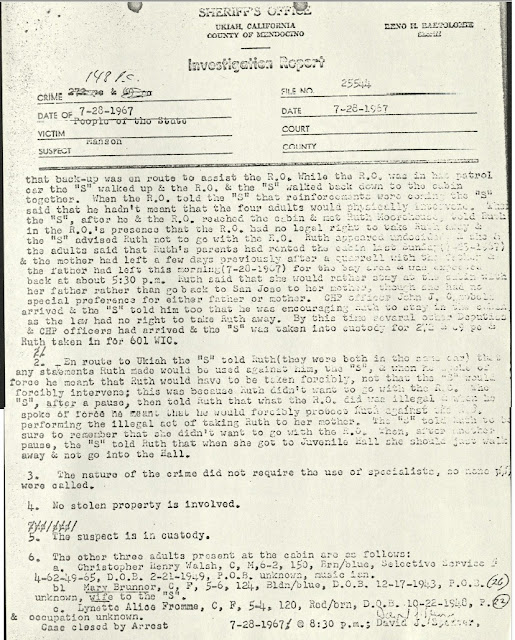 The day after Manson's arrest Dean Moorehouse wrote a statement for the Mendocino County Sheriff's Office absolving Manson of any wrong doing.

My wife Audrey, my daughter Ruth,15, & I moved into this cabin in Leggett one week ago.

My wife got angry with me Wednesday night, July 26th & on July 27th she left and went to San Jose, Calif.

On Friday July 27th about 9 AM I left my daughter with adults, Charlie, Chris, Mary and Lynn at my home. I left for San Jose on business & intended to return Fri. night or Sat. AM. I got back home this AM about 11:00 AM and found that my daughter had been taken to Juvenile Hall & my friend Charlie, was arrested.

The above people are friends of mine & I left my daughter in their care, temporarily. In my opinion, the order from the San Jose Police Dept., was invalid as no proceedings for divorce or separation, have been filed by either party. 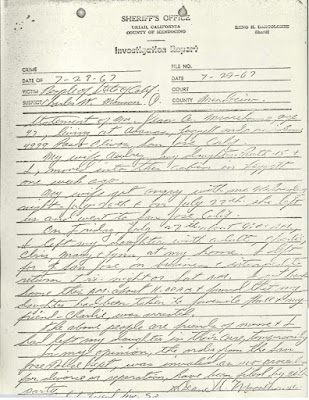 
DebS said...
There is no hint of contributing to the delinquency to a minor nor any charges of improper activities with a minor.

How dare them impugn Charlie's good name with such salacious allegations. Where do people get such crazy ideas?

LOL Starviego! The point of the post is that sometimes the allegations aren't what they seem on the surface. If you simply have the newspaper article to go off of, you'd think that Manson absconded with 15-year-old Ruth Ann and holed up in a remote cabin to have his way with her. But after reading the report we find that it is anything but that initial impression.

I'm not trying to defend Manson in any way but rather showing, with documentation, that there would be no reason to violate his parole and send him back to prison for this incident. I know a lot of people feel that Manson should have been sent back to prison for his activities that got him arrested at least ten times between March 1967, when he was released from federal prison, until he was finally arrested in Inyo County in October 1969.

It's by digging up the police reports from these incidents that we can see why he wasn't sent back to prison on a parole violation. This incident had nothing to do with a cover-up or mind control by shady government operatives.

This is what I admire most about this blog - the combination of original documents and in-depth analysis. I heartily applaud you

Another good one, Deb.

But theres no denying that ultimately thats just what he did. Hole up in a remote shack and have his way with her. So maybe the cops actually got it right the first time.

Excellent post. Interesting how often events turn on the simple fact that people sometimes either half-ass their jobs, or they just don't care. No conspiracies involved, just people muddling through their days.
how much weight do we give to the truthfulness of Fromme's account? Just curious on opinions.