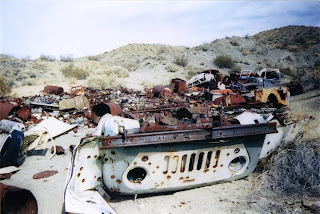 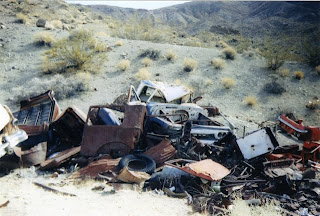 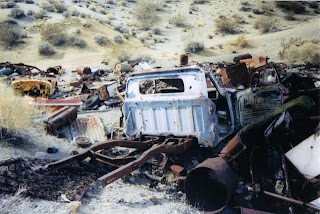 Barker, not Spahn. Tried to find the darned thing but could not - yes, it is VERY hard to find!

This was not left by the Family, right? How could it have been? They had no way to weld and cut and build when they were at Barkers, at least not at a large scale. In Desert Shadows (I think?) the author mentions a junkyard that he passed in the search. So, perhaps this was the one? Interesting nonetheless.

To be fair, though, most mining claim areas have the same junk heaps. From what I have read, this heap was there long before Manson (though they also contributed to it) and stuff was added after Manson. The blue truck cab and bed were somethings added post-Manson.