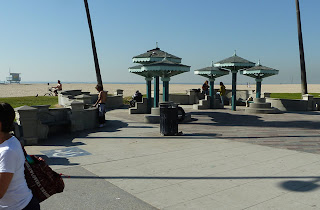 The benches on Venice Beach where Charlie most likely picked up a crying, thrown away Lynn. Thanks to Ken for the photo

The imagination needs pics like this to quench the thirst of curiosity all these books and conversations stoke...

I think that is an original quote lol- anyway Im drunk and it sounds good..

Can you stoke a curiosity?? lol ohhh well- that why I never write anything :)

I love you Liz and your site!! whenever I get into trouble somewhere else- It is nice to come here and let my mouse rest while I sit in my " home base" I think that you draw some of the very best people, and have some of the coolest information, and the most recent pics... blah blah blah lol

Your a good girl- but dont worry I wont tell anyone because I know you have to remain an Evil C to live up to your reputation, and ever since I saw Grease I know how important a " Rep" can be..

looks like someones been into the liquor cabinet again! :0

I only drink coors lite in a can :)

LOL hey it was my first drink in high school ,and I have stayed loyal after all these years- I take much heat for it- but when I have company I am aware its only my own poor taste lol- so when you visit The area- Ill have some Corona and Sam Adams for you as well..

That's a bet. You were in rare form last night over at T&L. Laughed my a$$ off reading it this morning.

Yeah I was home all night catching a buzz watching Mickelson play golf lol on DVR, and I guess as the buzz got greater... :)

That dude is such a tool lol

I ordered a print from Ken Keseys' sons website which I framed and put on a wall in my " music room" ..

It is an original poster the Merry Pranksters made to advertise for the acid tests.. Along with Cassady, and Ginsburg, and the Dead-

It also mentions the Fugs would be there...

I knew Ed Sanders claimed himself a major player in the hippy movement- but I read a few of his bios, and the Electric Kool-Aid Acid Tests.... and nowhere in any of it was it mentioned that he was involved in that scene... I thought he grew up and went to College and did most of his writing and music on the East Coast....

I was surprised to see the Fugs among the " probable happeners"...

Sanders did say in the family that the memebers of the family new the Fugs music- well that would explain how if Bobby and Sadie, and Charlie were all in the haight at the same time...

bobby has said on his site that the orkustra played early shows with the dead in the park...

and if the Fugs were playing with the Dead around San Fran at the same time...

Weird he wouldn't mention he was hanging around some of the same places roughly the same time???

Thanks! Love the photo. I remember reading how he jumped over the wall when he approached her. The walls look new(er), but I am sure they replaced an old one.

The round benches are new but the benches and the wall looked like they could of been there during this period. They had a different detailing than the round benches in the middle. The weathering on the benches/wall looked like some of the walls here in San Diego that have been here over 40 yrs. I can't say for sure they were there, but these are the only concrete benches in the area. These were at the end of 28 Clubhouse Ave.