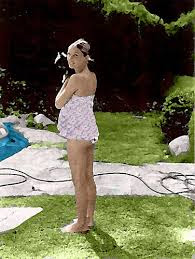 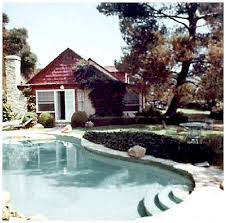 Yes I know, everyone has scene these pictures
a million times.  But I recently was told a little story
about the origin of these photos.  I was contacted
by someone who owns quite a bit of case
related memorabilia which was purchased from
Bill Nelson.


These are the supposed pictures from the undeveloped
roll of film the police confiscated after the murders and
later returned to Roman.


I was also told Voytek took all the above photos,
except for the one with him and Sharon together.
Did anyone else notice Jay's speedo is so tight
you can tell his religion?

Am reading Bill Nelson's book for the first time. What a XXXXing piece of work that dude was...

Obviously a member of the winning side the Battle of the Bulge...

While his 'religion' is no concern of mine (or that the supposed student of Bruce Lee looked so thin she could probably have beaten him in wrestling), what I'm reminded of every time I see these pictures the two together is differing opinion as to the nature of their relationship - and too how straight (or not) she was.

I’ve heard claims she was as pure as the driven winter snow, and just the opposite (drugs & escapades caught on tape that may or may not have included her as was said about the others lived at or frequented 10050 Cielo.)

I’ll play the part of a baby boomer of Midwest origins here (typecasting): I don’t believe it is ‘likely’ she was as pure as some believe, given the nature of her locale, friends, and industry. Too, while her husband (might have been?) ok (based on reports of the time) with her having a former beau around, it suggests to me the laissez-faire nee casualness prevalent in the 1960’s. I’m neither suggesting she was unfaithful/promiscuous (least with her former) or was not - I ‘am’ however wondering out loud about it, purposes other folks opinions, any.

Can only venture guesses / presumption, but as a guy who to this day remains so straight/clean he squeaks when he walks (though not when he talks), the specter via even appearances (at minimum) of a/my wife (who happens to be pregnant with their/our child) spending time with an ex-beau would be troubling... whether in Hollywood or the Heartland, guess I wouldn’t make a very good Roman as it were.

Thanks for the pics.
I've them all before except the Sharon/Voytek photo.......somehow I missed that one.
There are so few pictures of Voytek.

I agree Bill Nelson was a nut.
Not only that, his books are so poorly written....... its as if a child wrote them.

do you have a link to larger versions?

the man who e-mailed them to me is very-ecentric- i believe is the word. i can ask him. he never did say if he had the negatives. but like candy and nuts mentioned jon
aesnihil has a lot of the original negatives, he showed one on Charles Manson NOW. and it was the negative from a photo from this set.

the guy who sent them to me didn't say if he had negatives, just photos which he bought from Nelson.

i will ask him for you mr. foster.
but now that candy and nuts mentioned Jon, i think he is the only one with the negatives but not sure. i will contact the man and ask him later today.

daniel said...
do you have a link to larger versions?

nope but if you e-mail me at

i can e-mail you a larger copy. just make sure you tell me who you are and what you were looking for in the e-mail.
i get quite a bit of e-mails lately
so i will need a reminder.

candy and nuts said...
Im sure jon aes nihil contact you ont he story of this films he got the roll of films found after sharon died anyways liz Id relaly like to speak to you again.

candy and nuts-no i did not receive them from Jon. i find him a "strange bird" nice guy but, well you know i told you that before. if you still remember my other e-mail write me there. if not send it to:

i am the only one who has access to that e-mail account so i will get what ever you send. matt doesn't use that one so i will be the only one reading it. i am pretty sure i know what you want to talk about anyway, private shit- so don't worry no one else will read it.

Candy and Nuts- forgot to tell you, i don't remember your email other wise i would have contacted you instead of having to do it this way. <3

Panamint Patty said...
Am reading Bill Nelson's book for the first time. What a XXXXing piece of work that dude was...

i used to put a lot of faith into Bill. but as i started doing my own research, he embellished almost everything and lied quite a bit.
but i do consider him a mentor.
i so wish i knew he existed before he croaked. just a mentor on the Manson case. we all know of Bill's little child molesting incident, and he is in no way a mentor for me on that. we should start a little Bill Nelson chat. i know myself and quite a few others can go on and on about him all day. i think i will get around to doing that, a bash Bill post.

bashing bill one of my favorite hobbies and i don't need to embelish a thing.

LOL at the comment about knowing Jay's religion due to his speedos! He was buried in a Catholic cemetery.

To 1900 Yesterday, I couldn't agree more with your post. They seemed to be awfully chummy for just being friends. I don't know what their feelings for each other were, but apparently Roman didn't seem to care. Strange. I think your post was very well-written.