More on The Spiral Staircase

The following is a research project done on the house known to us as The Spiral Staircase by our official Paparazzi, Ken. The first two photos are historical records, the second two are his. 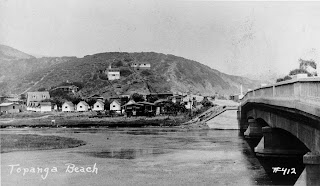 There isn't a lot of info about The Spiral Staircase out there and what is, is mostly speculation. Through several years of research, there have been some discrepancies and some explanations found. On some websites, it is said that The Spiral Staircase was a two story Victorian that had slide off it's foundation. It is said that only the second story was used due to the first floor being full of sand. It being the only two story structure is also something that is also mentioned.
Well, there were no homes in the area called lower Topanga (aka The Snake Pit) built in the 1880's or 90's. This removes the possibility that The Spiral Staircase was a Victorian. After searching the Santa Monica Historical website, this image was found. It shows a two story Dutch Colonial Revival home in the exact location as where The Spiral Staircase was. Quite often, Dutch Colonial style homes are referred to as being Victorian because it best suits it if one doesn't know architecture. This image is pre 1933. 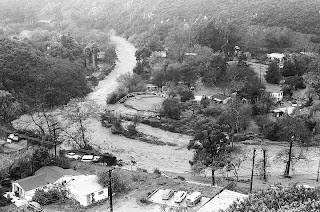 Building a house in a flood basin isn't always the best idea. This image helps to explain the house falling off it's foundation and why the first floor was full of sand. The Spiral Staircase was demolished in 1968 and this image might explain why. In 1968, due to heavy rains, there was heavy flooding that occurred in the Lower Topanga area. This probably is what brought an end to The Spiral Staircase. This image is of the same period that the family would have frequented the area and gives a good picture of what The Snake Pit looked like. The Spiral Staircase would of been behind the hill, to the left of the Palm trees in the upper left corner.
Note - The house in the lower left corner is the house that Clem, Linda and Sadie visited after leaving Saladin Nader's apartment. 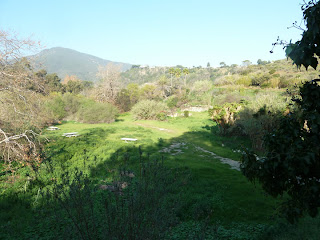 Ken's recent image of where The Spiral Staircase was shows all that's left. A couple of cobble stone retaining walls and a few park benches.
Note - This is where Charles Melton's camp site was that Linda Kasabian took the $5,000. This is also where Tex says he and Charlie first listened to The White Albun. 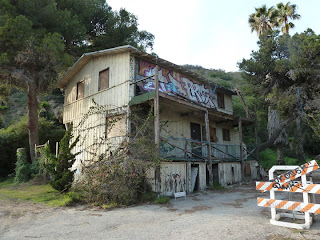 The state started the Revegetation and Restoration Project in the Lower Topanga area and on Feb. 14, 2006, the last of the residents of what was known as The Snake Pit were evicted. The State set aside three houses declaring them Historical Landmarks. No money is being funded and no plans to restore them have been made to this date. These are the last three houses left of what was known as The Snake Pit. Each of these being a few hundred feet from where The Spiral Staircase was located.
A interesting link with some writings by the last people to live at The Snake Pit.
http://brasstackspress.esmartdesign.com/
Something that might be of interest to all of you. I've done a lot of research on the area where the snake pit was. I have found enough info that William Randolph Hearst and Marion Davies owned the property where the spiral staircase was at one time. I have found enough info to almost be able to say that William Randolph Hearst and Marion Davies are the ones that built the spiral staircase as a weekend get away. William Randolph Hearst was having an affair with Marion Davies and the time that the house would of been built was while they were still being discrete about it. Hearst's wife wouldn't allow him to divorce her which would explain a hide away in a discrete location.

This was very interesting reading...

There is also some info on Hearst owning the area here: http://brasstackspress.blogspot.com/2011/02/la-times-12-19-82-shanty-village-at.html

Hearst and Davies were never discreet. They met in and lived in huge, lavish properties. They never would have visited this small property.