Book Report: Love Sex Fear Death (The Inside Story of The Process Church of the Final Judgment) 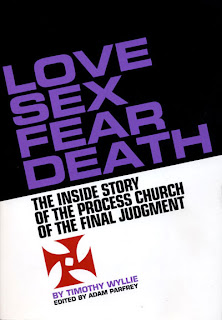 The Process has gone through many incarnations since its inception in the early 1960’s: in chron order the group has been known as Compulsions Analysis, The Process, The Process Church of the Final Judgment, The Foundation Church of the Millenium, The Foundation Faith of the Millenium and ultimately Best Friends. Founders Robert and Mary Ann De Grimston were named “suppressive persons” by Scientology’s founder, L. Ron Hubbard for using the E-meter and other Scientology-based techniques. Those familiar with the Manson case will remember a lawsuit that The Process won against Ed Sanders, who was ordered to remove all mention of the Process in later editions of his book, The Family.

Author Timothy Wyllie was an original member who left the group in the mid 70’s. Wyllie was a highly privileged “Inner Processean” (as opposed to a lower ranking Outer Processean or acolyte) who took the name “Father Micah.” He recently wrote and edited a book of memoirs entitled Love Sex Fear Death which is named after some of the early zines which The Process printed and sold as a way to chat up new membership on the streets. Today, Wyllie is mostly interested in what he describes as “non human intelligence.” Initially however, the Process philosophy had to do with rejecting scapegoating and blame in favor of personal responsibility and control over one’s own mind. This is what first attracted Wyllie to the group. Later, The Process became quagmired in an elaborate theology that included Christ, Satan and Lucifer among others (Processean dogs which were mostly German Shepherds were named after these gods), which might change at a moment’s notice upon the whim of Robert “the Messiah” and Mary Ann “the Oracle,” who later became extremely reclusive and known collectively as “the Omega.”

Wyllie does briefly mention some of the purported connections with the Manson Family outlined in Ed Sander’s original book. Specifically, he mentions a Process coffeehouse that existed briefly in Haight Ashbury in 1967, the same year that Charlie met Susan Atkins and Ella Jo Bailey there while living on Cole Street among other places. He also relates how The Process were considered Satanists by the general public and hence lumped in with Anton LaVey’s people with whom Sadie was, of course, very well acquainted. Wyllie is very dismissive of any and all connections as an artifact of the fashionable faux Satanism craze of the late sixties and early seventies. He claims to never have met Charlie or any of the girls to the best of his recollection.

The Process’ social structure and beliefs resembled The Family’s in many ways. Both groups were millenarian and taught that the end of the world was coming very soon. Both stressed the importance of getting back to nature and love for the animals, and both endorsed communal living and communal care of their children. Furthermore, donations from new recruits in a Ponzi-esque scheme also kept both The Process and The Family afloat. Ways that the Process differed from the Family include their prohibition of recreational drugs, tight control over sex and “spiritual” marriage, and an absence of illicit crime like theft, prostitution, rape and/or murder. Also, the tendency of The Process’ leadership was to be extremely reclusive rather than publicity seeking like Charlie. Nevertheless, rank and file Processeans were encouraged to try and recruit celebrity membership and as such encountered numerous celebrities including Abbie Hoffman, Timothy Leary, Miles Davis, Marianne Faithfull, George Clinton, Allen Ginsberg, Jerry Rubin and our friend Paul Krassner.

The remaining members of The Process formed Best Friends Animal Sanctuary which was featured in the National Geographic reality television series Dogtown. Mary Ann Mac Lean nee De Grimston nee De Peyer died on November 14, 2005 in seclusion on the property in Kanab, Utah. She had reportedly been in a comatose state for two years in a home which had been built to resemble an Egyptian Temple (note: Patty wonders if it is still there six years later?). Most of the staff there are no longer Processeans but a few of the old timers can be located by perusing the Best Friends’ online staff directory. Also on their website is a brand new logo: a sweet looking puppy dog face which if examined closely still eerily resembles two “P”s. Compare this with the original Process logo which is purportedly comprised of four "P”s: one pointing in each direction of the compass. (Patty is just dying to say it: oo-EE-oo!)
before> 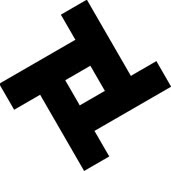 see http://www.bestfriends.org/ for more info on what is left of The Process and an interesting if not biased mini-history that serves as counterpoint to Wyllie's book.

Hey, I see four P's in the new logo. There's the two positive ones in the snout/mouth portion and two negative ones that face one another using the eyes ad doughnut holes.

There is also a pdf book of their rituals floating around the Internet.

I understand that there may be a revival of the Process Church. They in their experimentation hit upon a historical heresy: gnosticism. This theology arises ever so often.

It's truly amazing the things Patty has learned since Mr. Patty killed her television...American Idol who? Dancing with the What?

I'm getting a strong feeling that the Col is french...

best friends is an excellent animal society. i have friends who gone to utah multiple times to donate their vacations. it's kind of funny i was aware of and suported best friends before i became interested in tate/labianca. i was floored when i found out who they really were. by that time i was wondering what happened to the process and here i was sending donations to them all along.

Maryann was a prostitute at one time, and saying you are going to use donations for one thing while using them for another is theft.
In the book "beyond the cabin" one ex cult child recalls that the cult claimed, officially, to be an animal rescue sanctuary while all members still considered it to be the church.
As for murder et cetera, it's not like there weren't plenty of detectives and investigative journalists who suspected them, but, being sober, unlike the Mansons, would have also made them less likely to get caught.
Now they are successful and have pit bulls do their killings at an average rate of two humans per month.