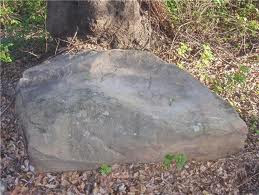 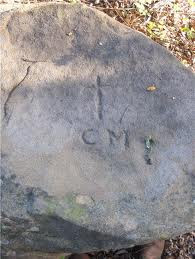 This is the rock some call Charlie's Rock. It is located in the creek area at Spahn's Ranch. It's rumored that this is where Charlie sat and played guitar and did his preaching to the family. It's said that Charlie did his audition for Jakobson on this rock too. From the discription of the audition in The Family, it would point to that as being true. Apparently it has been demolished since the last time I was up there. Michael at BackPorchTapes said he thinks Christians did it. Not sure if I believe that, but it's a shame it's been destroyed.
REST IN PIECES

The Christians did it? Call Homeland Security!

I don't remember seeing it when I went, but I wasnt looking for it.

Apparently a church owns the property now. They're somewhat hostile to visitors. It seems they treated the rock like Christians treat most aspects of Nature -- subdue and destroy.

The church doesn't own the property. It's well within The State Park boundries. That's a myth that was started by people assuming that they had bought it when the church was discussing it.

My Grandmother was a Christian. Went to church every Sunday, was a Sunday School Teacher and the whole shebang. Seems to me that all she did was celebrate life and what it had to offer.

Now, back on topic.

Stacey, it was near the creek in that open area by the "cave" rock. I guess it was demolished so I don't know what it looks like now. I wondered who scratched the CM in it. Hey Matt, does Hendrickson remember seeing it while he was there? Maybe you could ask him?

Apparently, the members of that church run off visitors to the Ranch, sometimes with verbal threats of violence. It seems they didn't get the memo about it being a state park.

AC from what I understand it has a lot to do with where you park. If you use the Church's parking lot they get nasty. Best to drop in from higher up the road, or else come in the backside from the south.

PS: Patty has only been there once, and it was a drive by.

AC, do you have any comments or questions about this rock?

Not really, thank you. I've never actually been to the Ranch... just heard lovely stories about it.

AC said: It seems they treated the rock like Christians treat most aspects of Nature -- subdue and destroy.

Ken said: My Grandmother was a Christian...Seems to me that all she did was celebrate life and what it had to offer.

Patty agrees with both statements. While she was raised Protestant, used to acolyte at the altar, and still does the big three with her mother (Christmas, Easter and Thanksgiving), she also understands how the Bible's statement that Adam and Eve were to "have dominion over" the earth, its plants and the animals has greatly influenced our consumer culture here in the US of A.

Nowadays, people seem to be getting back into the idea of sustainability. This has always been the way in cultures like say, the Shoshone Paiute.

And in July when Matt visits me I will sit on the rock and preach for Matt.

Then in August I will do it yet again when Leary visits.

Looking at pics of the rock I notice it morphed. Somebody carved CM into it and then somebody else carved a cross and then some odd symbols were carved. Somebody probably carved a swastika on it is my guess why it got mulched.

The CM with the cross were very weathered. It had been there for a long time. The X rock was at a different location on the ranch.

There is a rock at the ranch that someone carved an X in it. They thought it was the "Charlie's Rock" when they saw it. They posted it and stuff. I think the guys name was Chalob or something like that. I think it was at Turner's site. I had gone up to Spahn's of and on for three years poking around. The CM rock was the same everytime I went there. A few months after the last time I was there, someone posted that it had been destroyed. The rock with CM in it had been done many years prior to me taking the picture. Where they scratched the CM and cross had weathered so much, it matched the rest of the rock in appearance.

The significance of the rock, is that they say CM did his preaching on it. If you read Jakobson's account of the rehearsal CM did for him, the description of the hike they did points to this as being the rock CM sat on while playing for him.

Have you been to Spahn's Ranch?

No Ken. Never had the pleasure of ging there. There's too much in California to see in a lifetime.

If you ever get the chance, there's not much to see. The area is pretty though.

I was just happy I found the cave and that my friend and I were able to figure out the timer on my camera so we could get a picture of ourselves in it. It was much smaller than I thought...

It seems odd that whomever owns the property doesn't use it. I mean, the land just sits there unused yet they run tresspassers off. It's just vacant scrubland. What the hell does it matter if someone walks on it?

Is the Back Ranch part of the state park?

It is state park land. The guy that lives on Retz old property keeps people off of his property. He has every right to do so. The back ranch still has a house or two on it, plus there is a baseball field on it. The front ranch is supposed to be an open space preserve with the rest of the undeveloped land in the area. It's for joggers and bike riders.

Poirot I am pretty sure Barker is open to the public as I believe it is part of "Death Valley National Monument". If you can get up there you are good. Problem is getting up there. It's a long way from litteraly anything and even with a high clearance 4 wheel drive I hear its hard to get to.

Marc, Poirot is speaking of the BACk ranch at Spahn's not BARKER Ranch in Death Valley National Monument. You are correct that the entire Barker Ranch is now public property (for better or for worse).

Yea I agree, it's for worse. The buried bodies rumors all over CNN was like mating call for arsonists to come up there and burn the ranch that had been there long before Charlie ever heard of it. Arson seems to be the keystone of all psychopathic personalities. Charlie's 1st and last crimes commited in his life was arson. I have no dount that a pychopathic arsonists set the Barker fire AND the Spahn Ranch brush fire in 71. Most of California's big fires are probably arson derived.

the Bible's statement that Adam and Eve were to "have dominion over" the earth, its plants and the animals has greatly influenced our consumer culture here in the US of A

That's true. But you can't blame God or the bible for that. There are many wonderful biblical statements that have been utterly misused and misinterpreted by people down the years. It was even a concern of Christ and his apostles back in biblical times.
Having dominion over the earth means it falls to human beings to utilize the earth's resources responsibly, sustainably and for the betterment of all of creation, not rape the earth, liquidate people for resources in their part of the world and dive headlong and selfishly into consumerism.
Sadly, members of the church that really should know better and constantly be operating both in the Spirit of God and the spirit of God's intentions and practical direction have too often through history been remiss in this area and thus, we are where we are.

I once again pick up the trail of GT on old blog comments! Hello, sir. I enjoyed your comments on the Col's blog. Is this your first comment here?