Addendum To The Female Bunch 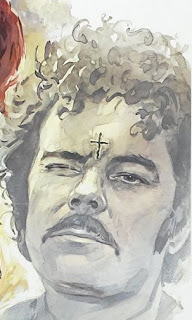 The Female Bunch - An utterly bizarre psychedelic exploitation western. The Female Bunch tells the tale of five lesbians who live on a ranch. They despise men and none are allowed to live with them on the ranch. Russ Tamblyn can bee seen having his face branded before being impaled with a pitchfork.

I was wondering why the man on the cover had a cross on his forehead.


Above is another synopsis I found about The Female Bunch.

The movie was filmed at Spahn Movie Ranch in 1969. It is very likely the Family was living there at the time of filming. There is a good possibility Charlie and company watched the filming. Maybe even a few members appeared as extras? There are quite a few similarities in the movie and - in the life of the Family.

The Family - An utterly bizarre psychedelic exploitation semi-western.  A group of (bi-sexual) women live on the ranch with very few men. One man being their leader, Charlie. They despise society and its rules. The leader Charlie himself branded an X on his forehead. His women followed suit.

Did Charlie take what he saw in the filming of the movie and intertwine it with his own life and the Family?

Thanks Liz. This was a great find on your part. I definitely would like to know if CM took in some of the filming and indeed liked the idea of the cross on the forehead. This wasn't filmed long before the crimes.

Thank you Liz, this is a one of a kind find and thread. Your researching skills are truly amazing.

This is cool, Liz.

Things that make you go hmmmmm.

Apparently, Russ is penning his memoirs:

actually, before the addendum Matt and I were chitchatting on the horn about the movie and HE is the one who brought up -that is probably where charlie got his X idea. so i cant take all the credit.

speaking of lesbian movies, is there an update coming on the Lo science fiction effort?

Do we know the exact dates that the film was made?

Shak El said...
Do we know the exact dates that the film was made?

Does anybody know of people as a group in modern American Society branding, cutting or scratching symbols in their foreheads prior to 69'? Outside of maybe religious purpouses, I haven't. Anybody else? If not, it might suggest that there was an influence by this movie for the X on the forehead.

I saw people who did this in the 80's, but we know where that came from.

Shak El: "The Female Bunch was shot in the summer of 1969, at Spahn Ranch during the time that it was occupied by the Manson Family."

leary7 said...
speaking of lesbian movies, is there an update coming on the Lo science fiction effort?

i e-mailed her yesterday. when i get the update i will post it