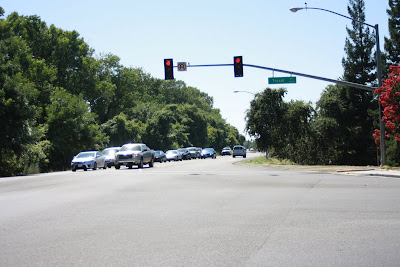 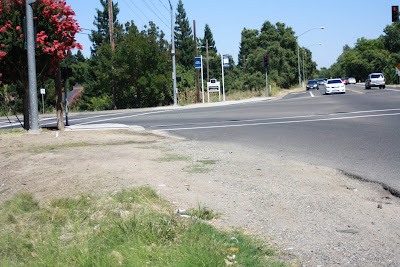 above: the only spot off the pavement big enough for a car west of Truxel on Sacramento's Garden Highway. In 1978 this would have been a relatively isolated place.


James Terrell “Spider” Craig's woman was Priscilla “Tuffy” Cooper. They were living with Nancy Pitman, Michael “Redeye” Monfort, Billy Goucher and Maria “Crystal” Alonzo in Guerneville when the three men decided to take James Willett out into the woods and kill him on or about October 17, 1972.

By 1978, Spider was out of prison and running with other Aryan Brotherhood fellas. One of them was 27 year old Ed Barabas, who had just finished serving a three year term at nearby Folsom Prison for armed robbery. Inevitably, something they were doing in Sacramento went horribly wrong. At about 4am on the morning of Wednesday, November 15th, police found Spider and Barabas with shotgun wounds to their faces and stuffed into the trunk of a burning 1967 gold colored Dodge near Discovery Park, Sacramento. The car was stolen about five miles south in a community called Hood, and reportedly parked just off the pavement west of Truxel on the Garden Highway. 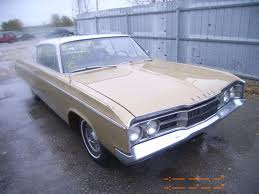 above: A 1967 gold- colored Dodge (not "the" Dodge, for illustration purposes only.)

Barabas was positioned closest to the back seat and was pronounced dead on the scene. However, Spider was taken to nearby U. C. Davis Medical Center where he survived in the burn unit until his death on December 22. Legend has it that his last words before a medically induced coma set in were “She’s dangerous!” Spider's car was later found parked downtown at 17th and Q. 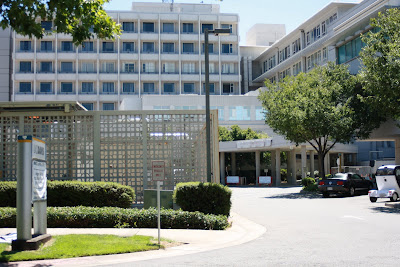 Above is the U.C. Davis Medical Center’s old ED where Spider was likely deposited by paramedics. It was vacated in late 2010 and is scheduled for demolition within the next two years.

Nice, Patty. Wouldn't it have been interesting if he had been able to finish the thought about who "she" is? Nancy was never accused of killing anyone - but people who ran with her sure did have some bad luck...

Patty - I have to admit I drove around that area investigating too when I lived over there.

Is this the same "Spider" Gypsy dated that Sadie mentions in her book?

Yes, Patty does believe they are one and the same.

and speaking of Gypsy anyone see that recent interview where she claimed that charlie told clem to basically kill her if she fled the family? She claimed she wanted to but was in fear of her life. Now something doesn't add up...after Charlie and the rest were locked up, if she so desperately wanted to disassociate herself from the family then why participate in Hawthorne and other ridiculus public interviews. She could have split o problem when Charlie was, as well as clem were out of the picture.

biglittlepatty said...
and speaking of Gypsy anyone see that recent interview where she claimed that charlie told clem to basically kill her if she fled the family? She claimed she wanted to but was in fear of her life. Now something doesn't add up...after Charlie and the rest were locked up, if she so desperately wanted to disassociate herself from the family then why participate in Hawthorne and other ridiculus public interviews. She could have split o problem when Charlie was, as well as clem were out of the picture.

I agree BigLittlePatty,
These people were so f*cked up from Charlie especially the ones that spent years with him.

Like Paul Watkins, maybe Gypsy was torn between staying or going completely. Or she seemed to enjoy the spotlight so maybe that was it.

All of a sudden over the past years the two "Family girls" with children (but not Sandy) claimed they could not leave because Charlie threatened to keep their children or harm their children. Sadie said it on her blog right before she died from "karma cancer".
Mary Brunner also said it.

No, the Spider that Susan mentions is a mix-up. Gypsy is talking about her 'new man', who is the 'most respected man in the prisons' and also 'so much more together than Charlie ever was.' This is Kenneth Como. Spider was a dumb sidekick to Como. Susan has got it mixed-up. after all, she wasn't writing the book til a good while later, years later, and after her Christian conversion, so it just goes to show the fragility of memory.
What is interesting to me is just how fast Gypsy had abandoned Charlie! She was in jail for trying to get guns supposedly to get him out. I don't believe this, actually. It's just another of Bugliosi's rumours, based on one throwaway remark, like 'Brenda is Manson's assassin' or "Hughes was the first revenge murder'. Gypsy and Mary had finished with Charlie, emphatically and were now besotted with Como. That gun robbery was probably for a revolutionary purpose. Gypsy told Susan that when she got out, she was going to 'bring it all down', that is, start the revolution. Mary, she said she hated Charlie. How quickly all that love and adoration vaporized. Makes me feel sorry for the guy. Only two loyal adherents, both scary fanatics.

So I just checked Helter Skelter and as I thought, the whole, the gun were in order to hijack a 747 was yet another Bugliosi story based on one uncorroborated witness. Supposedly a family member. What's the betting it was that White Rabbit idiot?

Bug does this all the time. One wild rumour. One remark. He turns it into a categorical truth. It's very annoying from a lawyer like this. I suppose he does it because, well, who would go and read all the books about the case and pull him on his evasions, rumours and lies? It's not like there is a group of Manson obsessives out there, commenting on a blog, after all....

This James (spider) Craig is my dad. Never met him. My mom is Priscilla (tuffy)copper. If anyone has any info to share I would love to hear it. I do know she died a few years ago.

I just found out that he was my grandpa. My grandma who had two kids with him left California and had all their names changed

Edward Barabas was my uncle....murdered with your dad. Please contact me.
Serena Barabas
@ serene_as_me@hotmail.com