The idea was to get to the public library in Santa Rosa to view old Press Democrat on fiche by five on Friday. That would give Patty a full hour before closing to find the goods! The traffic gods were not with The Patties however and they arrived a mere fifteen minutes before closing. Due to not yet having eaten for the day, encountering an especially witchy librarian, and being distracted by the lights being switched on and off, Patty’s hands shook so badly she could not even thread the damn thing: it exploded into a puddle on the floor. “Patty needs a drink….NOW” she said to Mr. Patty on her cell.

Patty returned to the library on Saturday morning completely refreshed and relieved to find a much nicer librarian to help her find the following:

A badly decomposed body was found in a shallow grave yesterday atop a mountain about a half-mile south of Guerneville, acconding to Sonoma County Sheriff Don Striepeke.

Striepeke, who had deputies out last weekend digging for possible Hell's Angels' victims, declined to speculate today whether the unidentified body was involved with the motorcycle gang.

"We're not speculating on this at all," he said. "We haven't tied in anything with this body."

But the sheriff pointed out that the body was "clear across the county" from the Sonoma Valley area where deputies hunted unsuccessfully for buried remains last weekend.

Striepeke said his identification people returned to the grave today and were making a careful check of the area around it for evidence. He said deputies secured the area after the body was removed Tuesday night.

The grave was discovered by Robert W. Stevens, 71, who was hiking along an old road in the mountainous area when he saw a hand protruding from the ground, the Sheriff said.

Striepeke said identity of the body, which had apparently been buried several months, had not been established and it was impossible to say this morning whether it was male or female.

The clothing offered the best lead to officials trying to identify the person, he said.

Shortly after Stevens contacted deputies at the Guerneville sheriff's substation, Sgt. Joseph Aleksick went to the spot and confirmed the presence of the body, according to official information released about the discovery.

Striepeke, several members of his staff and Deputy Coroner Don Noriel worked several hours into the night exhuming the body.

It was taken to Guerneville Redwood Chapel where an autopsy will be performed today to determine, if possible, the cause of death, the sheriff said.

The only physical description authorities were able to provide was that the person appeared to be medium height and had dark hair.

Striepeke asked that anyone with information on someone wearing a Marine dress blue jacket to call his office at (redacted).

Over a cold pint of Pliny (the Elder), The Patties took a pencil to a mapquested aerial view of the area south of Guerneville: 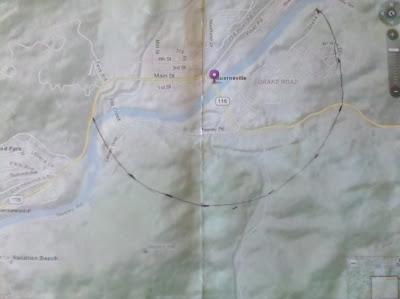 And then, they were off. (More later: check back soon!)

Fuggin' cool, Patty! I can't wait for the rest of it.

This murder gets very little attention. But it should.

Patty was surprised to learn that at first, folks thought it was The Angels.

Enter the evil trio of Monfort, Craig, and Goucher. Karma is a bitch. I agree. The killing of the Willetts gets little attention. It's time their story gets heard. Thanks Patty.

Thank you for sharing that with us.

Imagine being that poor ol' guy hiking and finding that... shudder.

I can't wait to see next part! Thank you for sharing this with us

great post. looking forward to reading the rest. the last known killing related to the family. nancy looks happy as a pig in shit these days though, dont she? i guess it should just be chalked up to 'we did some crazy stuff as kids didnt we?'