It was not long before the authorities realized the Manson connection. The page one headlines of the Press Democrat on November 13, 1972 read:

The slaying near Guerneville of a young Marine has touched off the arrest of two men and three female members of the Manson family in Stockton.

San Joaquin County authorities yesterday uncovered the body of Lauren Willett, the 19-year-old wife of James T. Willett, 26, whose body was found on a mountain south of Guerneville last week.

The body of the young woman, shot through the head, was found in a shallow grave in Stockton yesterday.

Sonoma County Attorney John Hawkes said he would file a murder charge today in connection with the Guerneville slaying.

San Joaquin County authorities said those arrested over the weekend in Stockton are being held as suspects in the slaying of the Willetts.

Willett’s body was found by an elderly hiker when the hiker saw the victim’s hand protruding from the ground.

San Joaquin investigators said the Marine’s wife had been buried one day. She had been killed by a .38 bullet through the head.

Authorities said the three women, arrested with the two men at a residence in Stockton yesterday, had scarred crosses on their foreheads – a mark that identified the women in the notorious southern California hippie family of Charles Manson.

Stockton police said they had arrested one of the suspects, Michael Monfort, 24, on Oct. 3 on charges of robbing a liquor store. He identified himself as Willett and later jumped bail.

Officers recaptured him Saturday and questioned him about having Willett’s identification.

Others arrested at a Stockton apartment were James Craig, 33, Priscilla Cooper, 21; Nancy Pitman, 24, and Lynette Fromme, 24.

Willett’s discharge papers were found in the residence, the officers said.

Goucher was arrested with Monfort for the Oct. 3 robbery and has been in jail since.

He said he is withholding issuance of a murder complaint until completion of some last minute investigation in the Guerneville area by a sheriff’s detective.

Meanwhile, an official with the Department of Corrections said today Monfort and Craig are known to be members of the Aryan Brotherhood, a white racist cult of prison inmates which deals in murder contracts for profit.

At the time Monfort was arrested with Willett’s identification and stationwagon, officials said, he was wanted for escape from a state prison work camp.

Hawkes said today there is thus far no connection between the three women and the death of Willett in Guerneville.

In Guerneville, The Patties located the old Redwood Chapel at 14045 Mill St., which is now a county building of some sort: 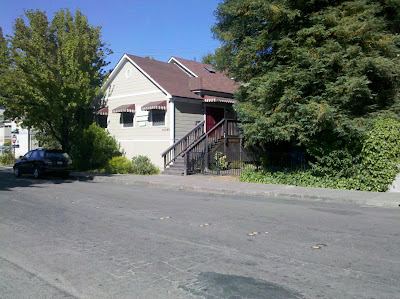 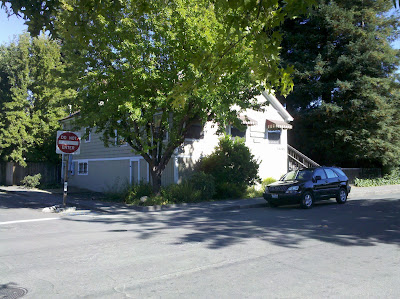 James' body was likely brought to the lower level through these very doors. But, where was he found? Check back soon, there is much more to come.

These girls were attracted to the worst elements in society. I don't think you can get lower in the gene pool than Michael Monfort, et al.

Poor Reni was buried in the basement and they were prepared to just carry on with life in that house and pretend Heidi was theirs.

I wonder if Nancy loses sleep these days?

I've thought the same thing, Matt. Considering the things NP had her toes dipped in during all of those years she served only a very short prison sentence. She even had a jailhouse wedding to that animal Monfort. How can't all of that weigh on the conscience of someone who seemingly has it together now?

For ever? Do you have a link for us ro read, Sid?

Patty loves you, Suze. But not in a gay way.

i think it's in gay way, Patty. Congrats, Mr. Patty!

Panamint Patty said...
Patty loves you, Suze. But not in a gay way.

WTF Patty?! I thought I was the "only one" you felt that way about? We are no longer BFF's.

SUZE- I heard you have been the defender of
eviliz's honor other places. Thank you!

As far as Patty's comment-she says that to all the girls!

what ever happened to Priscilla Cooper? was this the last she wass heard of? i know i could easily look it uo but i forget offhand. was she around pre tate labianca?

The property where James Willet was murdered was 16193 Neeley Road. A single home, now vacant is all that is left. Standing from the street, to the right of the house is a small dirt road which takes you back to the old cabins which are still there, but not standing. It is up the hill on the side of this road where the body was found. I know as I lived there for 17 years. WIllets daughter even came to see the property years ago. Ive been reading where some of the folks who post here think it happened but they were way off. Quite a few discrepancies from the folks who posted pictures from town. The mortuary pictured is actually offices now, but the mortuary that would have taken Willets body was a block down from the picture shown. The son of the Funeral Director at that time still has the old mortuary but has completely reonovated it. The toad shown is Mays Canyon which is off Hwy. 116. Where all this happened is directly across from Parkers Resort on Neeley Road.

As an aside, Country Sue is still in town and hanging out at the local coffee shop to this day.