Pics for sale on E-Bay 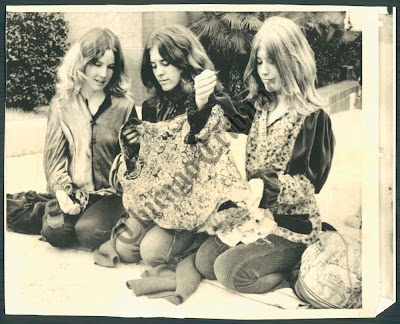 Who says Brenda wasn't pretty? Have a look for yourself, she was beautiful.

Squeak had some curvy legs, too. It's a pity the sample sign hides one of them.

Several of them are quite cute all things considered

problem for me is that some of those " All things" include but are not limited too...


So- that sort of kills it for me

Some of the girls were very pretty like Ruth Ann, Kitty, LuLu & Sandy. The only looker among the guys was Bobby.

All you girls just love Bobby!!

Look how stylish Gypsy manages to make her jail garb appear! Woo-woo! Evidently they gave Ruth Ann the wrong size dress! In the next photo down, look at the similarities between Nancy Pitman's face and Kitty's face, particularly noticeable in b/w photography (hair color less distracting). I think this is why in the Baby Paul Share photo, so many people think it's Nancy on the right (I am sure it's Kitty L.).

Patty agrees with you about that photo, House, it's definitely Kitty.

Those girls are quite pretty, they could have done so much better than those scub bags at the ranch. Bobby was pretty hot, but once he showed me where he lived I would be outta there!

I think loads of the guys were hot! Danny, for one, little Paul is so cute, Clem is sexy in his loose graceful way, and Charlie too. Tex was conventionally handsome. Actually, the only ugly one is that Dennis Rice. Perhaps the reason he joined after Charlie was jailed is Charlie wouldn't have let him in. He mostly chose a good-looking crowd. That White Rabbit guy couldn't get in, either.
Bobby is too handsome. he's got that I'm fit but I know thing going on.
'Fit' is british for "hot', btw.