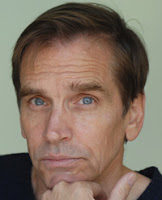 Moseley will be playing Charlie in the Manson Girls Movie.
I ran into Bill Moseley, aka Charles Manson in Manson Girls, at the Viscera Film Festival, a festival dedicated to horror films directed by women, where Bill was definitely the hit of the party. We started talking about our upcoming shoot and some of Bill's unique and quirky interpretations of his film roles, violent people versus sexual people and movies in general.
Susanna Lo: Many people seem to view Manson Girls as a horror film. Do you? And if not, what type of film do you believe it is?
Bill Moseley: I'd say Manson Girls is not a horror movie. The characters and situations are certainly horrific, but the movie itself is more a drama.
Susanna Lo: You are a classically trained actor, a Yale Drama graduate, who has given brilliant performances in many films as a character actor. And yet, you are most famous for playing twisted, sinister characters like Otis from Rob Zombie's House of a Thousand Corpses and The Devil's Reject. What is it about you that makes you so good in these bad-guy roles, and do you think Charles Manson, who you will be portraying in Manson Girls, is more than just your average villain?
Bill Moseley: Normally, I'd say that I'm as baffled as you that such a nice guy (me) can play such twisted characters with such authenticity and relish, but I'm hungry now, I'm on the road, there's nothing to eat in my mother-in-law's larder and the monster is beginning to rise! I see Charles Manson as the product of his times, his upbringing, a person endowed with certain people skills, ambitions and insecurities that all mixed together to create the "monster" he became. If you watch some of his interviews on YouTube, you'll see, on the good side, that he's bright, got a sense of humor and poetry in his soul. It's his dark side that scares the hell out of us, and for good reason!
Susanna Lo: If you were given the choice to play the lead hero or the lead villain in a film, both parts equally well-written, which would you prefer and why?
Bill Moseley: I don't really think in those terms, hero vs. villain, etc. When I play "psychos," for instance, my first rule of thumb is to believe that I'm the only sane guy in the room. If the parts were equally well-written and equally well-compensated, I'd probably end up flipping a coin.
Susanna Lo: You will be singing along with The Doobie Brothers on the soundtrack for Manson Girls, doing an original take of The Doors classic, Five to One. Do you have a musical background? And what do you think about having The Doobies and the cast of Manson Girls joining forces to create the film's soundtrack?
Bill Moseley: I've always been a Doors and a Doobies fan, so the opportunity to sing Five to One is as fulfilling as it is exciting. My musical background goes as far back as playing trombone, tuba and sousaphone in my grade school band, piano lessons that went nowhere (especially when I picked up the bongos!) and singing in my prep school choir. I've been in three bands in my life: the Moseley Brothers Band (with brothers Bruce & Dan); Cornbugs (with guitar god Buckethead); and Spider Mountain (with Rani Sharone). I also sang the part of Luigi Largo in the movie Repo! The Genetic Opera with the likes of Sarah Brightman, Paul Sorvino and Paris Hilton, and I've added vocals to albums by Oghr (Devils in my Details), Generichrist and Necrophagia.
Susanna Lo: Manson Girls will be a film more known for its representation of the overt sexuality and the carefree nudity that was an emblem of the 1960's. It’s something that is already causing a lot of controversy with funders and producers who were concerned it would earn a X-rating if shot in the way it is written on page. The film will also downplay the violence and the murders, literally avoiding any depiction of the Tate/LaBianca murders. Why do you think Hollywood and America has so many issues with sex and nudity and seems to turn a blind eye to violence, at times even encouraging violence in films, especially against women?
Bill Moseley: Glad we're finishing with an easy question! I'm kind of Mr. In-Between on this: I've played a number of violent characters, killing both men and women joyfully, indiscriminately, and I'm the father of two girls. Would I rather see violence in a movie or sex? Depends on the day, on my mood. Am I surprised that there's more resistance to a "brazen" depiction of nudity and free love than some psycho murdering women? Not really, that just seems to be a market preference. You'd have to query a social psychologist for the answer to why that is. I don't pretend to know the answer. Sex and violence are both powers, often intertwined, hard to control, impossible to take your eyes off of. And, Charles Manson for a while held both sets of reins and unleashed some real hell on his fellow human beings. We all have these powers. Guess it just comes down to how we use them, enjoy them.

I love Bill and all, but my God, he is WAY too old to be Manson. Bill is like 60 and looks it. One odd thing, though, Manson and Moseley share the same birthday.