This is for Heidi Willett...

On February 5, Liz posted photos of  "Lauren & Heidi Willet with Frenemies". You can re-read it here:
http://www.eviliz.com/2011/02/lauren-heidi-willet-with-frenemies.html

Last night Cece, who knew the Willets and stayed in a nearby cabin at the Russian River resort posted the following message for Heidi. First-hand insight - the kind of stuff that makes this blog so worth it. Thank you, Cece. We hope Heidi still reads regularly. 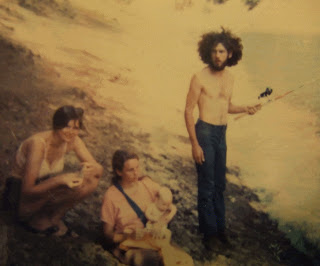 This is for Heidi Willett...

Heidi, I met both your mother and father while living next door to them in one of the cabins at the resort up in Guerneville, which were the cabins right on the banks of the Russian River.
I never in a million years would have suspected that they were part of a robbery gang, they seemed like such a loving couple.

Your mom used to carry you around in her arms and you were getting pretty heavy, so I gave her my baby backpack since I was using a new stroller instead for my little girl who was too heavy to be carried in a backpack.

Your mom was very shy and looked quite frightened most of the times I saw her and wouldn't talk with me. Your dad seemed so nice and loving to her and you that I couldn't figure out why she looked so worried. Now I know.

Your dad was a very friendly person, calm, easy going and was very kind to my elementary school age son and loved to take him catfishing at night on the river. My son adored your father and never had a bad word to say about him. They caught catfish using a lantern and I had to learn how to cook the one my son brought home. Shake'N'Bake for fish did the trick.

I was living up there with my two young children and my friend who I had met through my religion, the Baha'i Faith. We used to hold Baha'i meetings in our cabin on Saturday nights and sometimes your dad would ask if he could come in and listen to what we were talking about.

He wouldn't come into the main room where we were all sitting around, instead he would sit out in the kitchen at our wooden picnic table and listen all by himself.

One night when he was sitting there listening, we heard someone pounding on our door, opened it and were startled to see "Spider" Craig holding a large commercial size mayonaise jar full of Tarantulas. "Spider" looked past us at your dad and then said "here's a present for you girls." We said "no thank you", he turned away smiling and we closed the door.

We didn't even know "Spider" knew your father. We had just heard some really scary stories about "Spider's" violent behavior around town, so we tried to steer clear of him.

One night shortly after your parents' deaths my friend and I decided to say prayers for your mom and dad. After we were done, I asked my friend what she thought they were thinking because I had some feelings that I wanted to verify. She said that she felt at first that they were both annoyed and mad at us for praying, that they felt we didn't know them well enough to pray for them, but then as we continued to say prayers out loud for them, they became calm and then happy and grateful we were praying for them.

Those was exactly the same feelings I picked up while saying the prayers...anger, then calming down then gratitude.

I certainly hope both your parents are blessed and can rest in peace.

I've always wondered if perhaps your dad's contact with my Baha'i friends caused him to try and back out of the robbery gang. That makes me sad to think this but at the same time happy that perhaps he and your mom are blessed because of what he attempted to do to protect you and your mom.

Wishing you every happiness and peace Heidi...you were a darling, sweet-faced baby girl and very loved by both your parents.

Thank you again, Cece. If you stumble across any more memories we'd really like to hear them.

god the damage some of those people caused...

It makes me wonder how anyone can defend people like Squeaky and Sandy and Nancy for anything...

For a time- they were truly evil people... they consistently surrounded themselves with the very worst of men...

and defiantly stood by them no matter how atrocious there acts became...

and whats worse- not only did they stand by for it- they boasted about it, and gave no apologies for it...

May the lord have mercy on there souls- because St. Circumstance sure wouldn't...

Patty seconds what Matt said. We'd love to know more, Cece. Do you remember the name of the resort? Was it the Creekside or Parker's? If you want, you can contact us privately. Thanks for checking in.

Wow! That gave me chills - the good kind, though.

Sounds like JW had an inquisitive, spiritual side to him. Sounds even more like Spider was even more creepy than I thought. What does that say about Brenda, Maria and Priscilla.

I hope we hear from her again.

Off Topic: Folks, if you missed the Stephanie Schram interview on Star City Radio recently and want to listen to it, I've uploaded an mp3 audio file in the recent Stephanie post. Well worth the listen!

So... is Baha'i a cult too? Jesus, it's like all the "seeker" types were so susceptible back in the 60's. Not like there aren't cults and easily-led people now, but at least we have Google, ha.

Anyway, it's cool someone is communicating what happened back then.

Not a cult. It's an organized religion that's accepted worldwide.

Accepted in the civilized world, anyway. You wouldn't want to be Baha'i in Iran.

One scary note about Spider Craig; he was later found in a trunk of a burning car with his jaw blown off with some other poor soul. This was 1978, I think. Craig was saying "she was dangerous," apparently. I think Craig survived- not sure. Manson spoke about this on Geraldo briefly: "those two snitches in the trunk of the burning car," or something.

three line enters your bass fishing. Ideally you should carry all 3 every time when going fishing for bass.