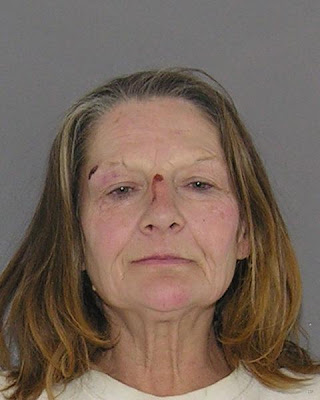 A few folks over the months have sent me this picture of a Mary Brunner. Unfortunately she is not THE Mother Mary Brunner. The woman in the photo is 59. Ten years to young.
But great job on armature sleuthing!!
I will share with you what little info I do have on Mary. Mary will be 69 this year.
At some point probably after one of the raids she shipped the son she had with Charlie, Valentine Michael Manson off to Wisconsin for her parents to raise. They changed his name, dropping Valentine and Manson.
Mary also changed her own last name and moved out of WI. As far as I know she has never married or had any other children.
http://www.whosarrested.com/ohio/hamilton-county/cincinnati/hcso/598454-mary-brunner

Who won the fight?

I thought that was Matt's sister, oh well.

maxfrost said...
Who won the fight?

I don't care what any of you say, I still think my mom is purdy..

and has most of her teeth.

Does she have eleven teeth? One up and one down:)

she has sommer teeth....some are here and some are there

I don't know if I 'feel bad' for Mary, C&N, but she is one of the more intriguing characters if only because she was educated and I assume fairly intelligent. But my gut tells me if she hadn't been in jail, given her fierce loyalty to Charlie and the fact she was at Hinman's and thus was a testimony threat to Manson, that she would have been chosen to go forth on the murder nights (the dirty hands thesis). And she was at Hawthorne.
Still, it would be fascinating to have some info on Mother Mary's post Manson life.

and I still say one of the more colorful and intriguing vignettes of the Manson story is the time Sandy and Squeeky flew to Wisconsin to lobby Mary back into the fold and to get her to retract her Bobby B testimony. I mean that would be one helluva short story if someone had the facts and inside stuff on that episode. Does anyone know if any of the 160 books on the subject covers that story in any kind of detail?

Participation in the two day torture of a friend and an armed robbery makes Mary one of the hardest of the hard core. With friends like her...

thanks Candy y Nuts. I just spent the summer up in Green Lake Wisconsin (had to flee the Texas heat) so I share a love of cheese land.
That's what makes that particular chapter so compelling - the dichotomy of these two crazed California babes, Red and Blue, landing in Dairyland to lobby the original Manson convert back into the fold. I seem to remember they met and talked at like a Denny's or something. Imagine being a Wisconsin waitress and serving that trio. Some unusual vibes and energy for sure.

yeah Max, how hard exactly was her core has always been the question. The Hinman and Hawthorne events testify to a hard core. But obviously her time in prison did change her as she disengaged and disappered after getting out. I guess that is what makes her so interesting to me, how she went from one extreme to ostensibly the other.

I have also wondered about Mary. Her late parents were said to be wonderful people. I am glad she was able to change her name and so successfully disappear in or around her home state. I also am insanely curious about what happened to her after she finished her Hawthorne jail sentence. Also, she has such a recognizable face, how could she so easily just disappear? Well, good for her. (I guess...)