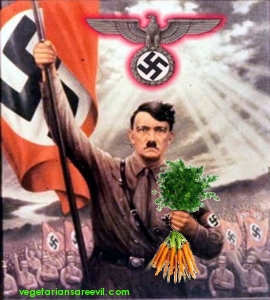 As a vegetarian myself, I have to say, I'm sorry some people are this ignorant.
I don't know any other veggie's, and I just decided one day that no animal has to die for me.

Doesn't seem evil to me. Killing them just to eat, while there are loads of alternatives seems a lot more evil and ignorant.

But hey, that's me. Anyone who wants to eat meat, should do so.
It's just that personally, I felt guilt in doing so.

If God didn't mean for us to eat animals, then why did he make them out of meat?

Just make sure you're not wearing anything made out of leather or other animal fabric if you truly want to walk the walk as well as talk the talk.

Let's be honest here, if a cow could, it'd kill you and everyone you ever cared about.

Patty read in Witness to Evil this week how Bugliosi compared Hitler to Manson in his closing arguments. He stated that just because the two of them are "animal lovers," that does not automatically make them nice guys.

People still use Hitler all the time when trying to make their point about something or someone they do not approve of. Usually, the mere mention of Das Fuehrer kills the convo for Patty. Her only interest in Hitler is, did he or did he not have a missing nut?

There's no doubt a vegetarian diet, done correctly, is healthier for you. I suppose if a doctor told me I had to become a vegetarian, I could do it. I could never be a vegan, though -- not willing to give up dairy and eggs, no way!

And yes, Hitler allegedly had only one testicle and, by some accounts, died a virgin even though he had a girlfriend.

One of the nicest people I know is a vegetarian. He feeds his beloved pets meat. Go figure.

Any vegan I have ever met has had really bad breath!

The thing is, do plants really want to be eaten? Has anybody asked them?

caMatt, you oughtn't to eat meat... you know they make that stuff out of dead animals, right? Ackie!

Suze, every meat eater I've encountered sweats those alkaloids thru their skin... euwww!

So do I. Cats need to eat meat. Their intestines can't handle just veggies.
The human body on the other hand can very well do without eating corpses ( of animals )