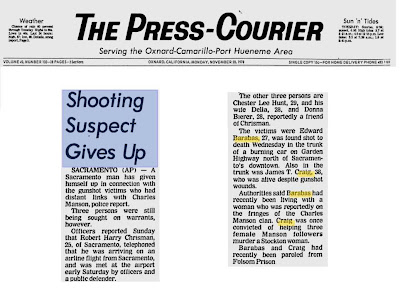 FARFLUNG recently wrote in to Eviliz.com:

I enjoy the blog and was always flummoxed by the bizarre web which included Fromme and some AB types who ended up in Sacramento. According to the ‘California Death Index’, James Teurrill Craig (DOB 08/23/1939) lasted till 22 Dec 1978 which is just over a month after Robert Harry Chrisman turned himself into the police. I suppose he thought that Craig would ID him anyway and gave up.

At least this offers a couple possibilities as to who the ‘she’s dangerous’ woman may have been. I thought the fact that Craig’s car was found less than two blocks from Fromme’s former attic apartment was some possible message to Squeaky, but appears to be just a coincidence. That part of town in the mid 70’s wasn’t the best of areas...Any other information about this double homicide has been difficult to find. At least for me."
So, does Farflung mean that the "She's Dangerous" comment made by Craig in the UCDMC ER referred to Della Hunt or Donna Bierer? And, why did Chrisman turn himself in in Ventura County instead of Sacramento? Were these people once "friendly" with the Manson Family?

Some questions answered, but so many more remain!

Patty has seen Spider's middle name spelled "Terrell" and "Teurell" in various places. Which is it? Anyone? Anyone?

Is there anything more stupid then that Geraldo listening to Manson?

Sorry about that Patty, I was a little (cough, cough) off topic. It's just that I had watched one of Geraldo's interviews with Manson - for the thousandth time - and was struck by how Manson was able to make Geraldo look so dumb...at least to me :)

Yeah - Geraldo. He is a goof but Patty has a soft spot for him. She remembers watching him open Al Capone's supposed vault live on TV in the 80's: she stayed up WAY past her bedtime to see what would happen, and it was NOTHING, dammit! LOL. Scarred at an early age, she was.

'helped 3 female members murder a Stockton woman'...say what? Is that the Willet killing?

I dunno, Im not a fan of Geraldo,
But as far as interviewing Charlie, I thought he did better than most.